What is likely the final hammer to drop on USC in regards to Reggie Bush fell this week when the BCS stripped the Trojans of their 2004 national championship. It was hardly a shocking move given everything else that has gone on in the case. However, it’s not as though the folks at USC won’t still be feeling the effects of it.USC athletic director Pat Haden says that he feels bad for the team, but he feels worse for the current Trojans players who were in middle school when Bush committed his violations. All the Trojans can really do is look to the future at this point, and that future includes trying to make sure the troubles of the past don’t occur again.While much of that falls on Haden and his fellow compliance officials at USC, he says it will likely remain impossible to monitor every player at all moments to make sure they aren’t dealing with agents. But he says the NFL and its Players Association — assuming it gets back together eventually — could put an end to it by, for instance, making players ineligible that get their college programs on probation.Pat Haden joined ESPN Radio with The Mike and Mike Show to discuss being stripped of the national championship, why he hasn’t heard from Reggie Bush lately, if he will still view the team as the national champion, if he would like to see Auburn awarded the title and the difficulties of monitoring so many student-athletes. 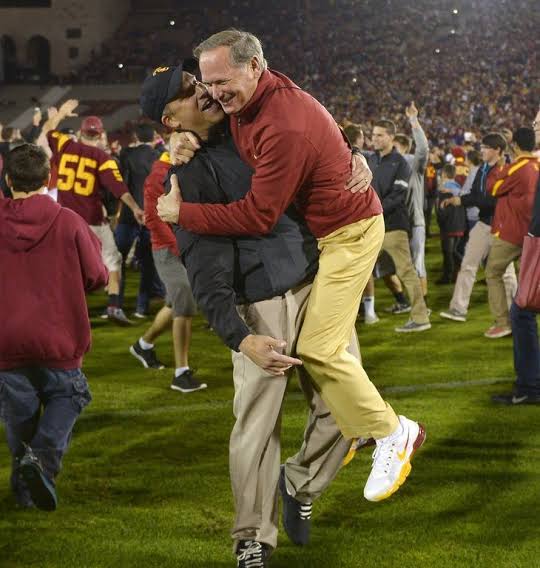 His reaction when he learned that USC would be stripped of its national championship:

“It wasn’t unexpected. It’s a complete disappointment and it’s been one thing after another over the last 10 months, but I knew what I was getting myself into. Our job is to kind of look forward now and get this behind us the best that we can. The other thing is it just shows you how vigilant we have to be in all our programs around the country because one player or one or two players can really bring a program down. We have to continue to try to recruit kids of quality, teach them to do the right thing and then do the right thing.”

Was this the last decision left to be made regarding the Reggie Bush situation?:

“As far as I know, yes. There’s nothing out there on my radar screen.”

What has he heard from Bush throughout this process?:

“We’ve had to disassociate ourselves with Reggie. That was part of the NCAA sanctions with O.J. Mayo, the basketball player and Reggie. … I had one conversation with Reggie months ago but other than that we haven’t had any contact.”

As a former player, would he feel the same as Matt Leinart, who will always view himself as a national champion?:

“For guys it’s difficult, those other guys who had nothing to do with that. To be perfectly honest, that’s what I feel most badly about in all these sanctions is these guys now who were in junior high school when this all happened. It’s kind of all perverse the way this punishment system plays out. I’m not sure I necessarily have a solution to it, other than maybe fining universities a significant amount. Our juniors and seniors were in junior high school when all of this went down.”

Is he a proponent of having the title vacated or would he rather it go to a program like Auburn?:

“That is a hard one. Auburn didn’t play in the game. That’s a very difficult one. I think, from our standpoint, we should vacate it. We did play with an ineligible player. I have no qualm with that. As to Auburn, they can make their own claim.”

On the challenge of the compliance office trying to keep track of 100 players at all times:

“Coach [Bob] Stoops is right [that it can’t be done]. Particularly in a city like Los Angeles, there’s lot of people trying to whisper in these guys’ ears. And until we get, I think some help from the NFLPA and the NFL themselves, for example rookie salary cap or making guys ineligible to play in the NFL if they put their school on probation — as two examples — this is going to continue to be a difficult thing, monitoring agents. But it is very, very difficult.”

How do you attempt to do it?:

“You try to recruit guys with high character, you continually educate them and you talk about the rules and you talk about the parents, too. The parents are the kid in the eyes of the NCAA so the parents have to understand the rules. … You have to be constantly vigilant and every time a situation comes up around the country … they’re another learning moment for us and a teaching moment for us. … Most of our kids, 99 percent of our kids, are doing everything right. For me, I have to constantly remind myself of that fact.”