From Heisman Trophy winner to undrafted rookie, the Arizona Cardinals have now seen it all at their quarterback position in 2010. First, it was Matt Leinart’s job. The USC product and Heisman winner was finally supposed to get his clear shot after the departure of Kurt Warner. When he didn’t find success in the preseason, a battle with Derek Anderson heated up. Ultimately, Anderson won the job and Leinart was released and signed by the Houston Texans.
Four games into the season, the Cardinals completed the full spectrum of starting quarterbacks, benching Anderson and going with undrafted rookie signal-caller Max Hall out of BYU. All Hall did was take a vicious hit, come back from it and earn a victory in his first start. 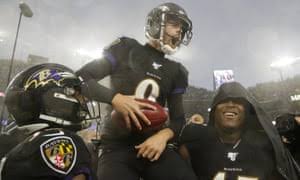 Meanwhile, Leinart is still waiting for his first official snap of the season.

Max Hall joined The Jim Rome Show to discuss whether he ever thought he’d be starting at this point, his thought process heading into his first start, the hit that he took that forced him to miss part of the game, whether the NFL places too much emphasis on size, the BYU-Utah rivalry and what it’s like to play for his hometown team in Arizona.

On whether he ever expected to be starting Week 5 against the defending Super Bowl champion Saints:

“Probably not, to be honest with you. I was more worried about making the team than having a job. It just took a lot of hard work and some things went my way and all of the sudden here I am getting a start against the Saints. I just tried to take advantage of the opportunity and give it my best shot.”

On his thought process heading into his first NFL start:

“I think I was just thinking that, that it was time to go. I just kind of said, ‘OK, I’m going to give it everything I have, prepare like crazy and I’m going to go out and play my game.’ I really didn’t try to make it bigger than it was and didn’t put too much pressure on myself other than just doing everything I could to prepare.”

On whether he’s ever taken a hit like the one he took late in the second quarter on Sunday:

“That one’s probably at the top right there. I just tried to make a play, cut back and had three or four linebackers waiting for me. I took a pretty big hit. Luckily for me, Levi Brown was there to pick up the ball and put it in the end zone. I learned my lesson a little bit right there. I probably won’t do that again.”

On whether the NFL puts too much emphasis on size:

“I think so. I think that’s the reason why I was not drafted, because of my height or my size. People say I have a weak arm, they can say whatever they want. I was determined to prove everybody wrong and show that, as long as you’ve got it upstairs and you’re smart, you can make plays. It doesn’t matter what size you are.”

“To be honest with you, I don’t think there’s a lot of respect in it. I think it’s just come down to hate and it’s unfortunate it has to be like that, but that’s what it is.”

On playing for his hometown team in Arizona:

“It’s unreal, with all the family support around you and to play for the team you grew up watching is unreal. I really have a great opportunity here in front of me and I’ve really been blessed to be in this situation. I just want to work hard and do the best that I can to take advantage of it.”