Jeff Van Gundy Knows The Game of Basketball by timgunter

I miss Jeff Van Gundy coaching in the NBA. I am not a Knicks fan by any means but it was fun to watch when he used to coach Latrell Sprewell and the Knicks. The most memorable moment with him was when Larry Johnson and Alonzo Mourning created a bench-clearing brawl and Van Gundy unsuccessfully tried to break up the fight and he ended up on the floor holding Alonzo Mourning’s leg. That Knicks squad went to the conference semifinals or better five out of the six seasons he coached before he resigned. 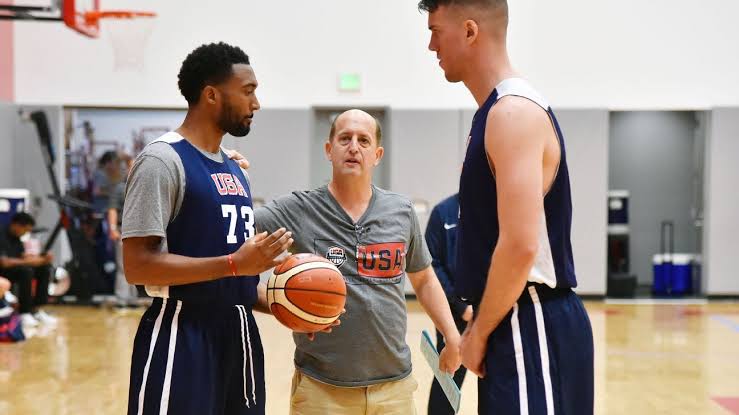 Talk about consistency, he took his teams to the playoffs nine out of the 11 seasons he coached in the NBA. Nowadays you can catch Jeff Van Gundy on ESPN and ABC calling NBA games and he only hopes to coach again in the NBA. He expressed his desire to return to coaching earlier this year and even stated that he would consider a return to coaching even as an assistant. If I were an owner looking for a new head coach, I would give Van Gundy another chance to show his coaching skills. After all, he is the younger brother of Stan Van Gundy and last I checked, he is a pretty good coach as well. Jeff Van Gundy joined 790 the Ticket in Miami to talk about the “pukey” intangibles he believes in the game of basketball, how important coaching is and whether anyone can coach Kobe Bryant and win consistently, whether they are going to see a different Vince Carter playing with Dwight Howard, and to talk about Ron Artest missing the team bus last season and riding to the game in underwear.

On the “pukey” intangibles he believes in the game of basketball:

“That’s a great question.  I think for myself I am more into mental toughness. I think there is a true component there of guys who are able to deal with adversity better than others.  You know there are a lot of front runners in sports.  To find a guy like a Shane Battier, with the Houston Rockets, who is the same guy everyday despite the he results for himself or his team, that is rare.”

On what kind of basketball analysis he objects to:

“He makes the other guys around him better. Any great player does that. This whole nonsense about in the batting order in baseball: Oh this guy is getting better pitches behind him.  It has been proven statistically to be not true and then in the NBA the great players they say: This guy makes the guy better.  Well of course he does.  He is a great player.  That is why he is a great player.  If he is good the other guys around him get more opportunities because of his greatness.  So that is like a throw-away line to me.”

On how important coaching is and whether anyone can coach Kobe Bryant and win consistently:

“Well everybody would win with Bryant and the team the Lakers have now but certainly not everyone would win championships.  Coaching is important in the NBA in the sense of order, the culture you bring for a team and this is what people don’t even talk about now.  The system that you bring, does it make sense for your talent?  Do your best players buy into who you are and what you are trying implement for your team?  If they do, they will sell it to the rest of the group and if they don’t then you are going to be fired.  I think that one thing that is misunderstood out there about leadership is that your best players are your leaders.  But leadership doesn’t always mean positive leadership.  It can be negative leadership and bring a team down as well.”

On whether the NBA has a problem that you can think of only 6 teams that can win the championship:

“It is 5 five teams to me.  Personally to me, Boston is the best team in the East.  Cleveland and Orlando or however you flip it are two and three.  And then out West, the Lakers and San Antonio, you would suspect would be in the Western Conference Finals.  The Lakers are better.  Could the Spurs conjure up one more championship run?  I think they certainly could.”

On whether they are going to see a different Vince Carter playing with Dwight Howard:

“Well he better be good because if he is not, they are going to struggle offensively.  You know Carter defensively is a negative.  You know he is just not a committed defender.  Now I think he will be more committed because of the accountability that they have in Orlando and one of the things that I think is overlooked in Orlando is they were a lights out defensive team last year.  They don’t get the credit for that because so many people say that they are soft.  Carter needs to be respectable defensively but then he needs to be great offensively particularly in the pick-and-roll with Howard.”

Whether the Lakers are better this year than last:

“Well I think it is hard to say that they are better because they already won a championship with Ariza.  So could they be as good?  That should be the question and I think they could be.  I give Mitch Kupchak a lot of credit for not giving into the demands financially of Ariza and having a plan B in his hip pocket that he could go to immediately.”

On if he were coaching the Lakers and if they told him they were going after Ron Artest, would he give it a thumbs up or thumbs down:
“Well I try to ascertain how crazy. You know the rumor was he came down for the final game of the Houston vs. L.A. series.  He missed both of those buses with the team, you know I read this somewhere, and he came down in his underwear down the elevator into the third bus, who had corporate sponsors and rode to the game.  That crazy?  I don’t know that is a little bit much.  If it is just an occasional late for practice, yeah you can deal with that because I have never seen him as a crazy player off the court.  You know he does some things, he pounds the ball, he holds onto it too long, his shot selection, sometimes just a little bit questionable.  But I think for the most part he makes sense as a player it just depends on how crazy is really crazy?”