FSU Has Made Jumbo Strides Under Jimbo

A lot of Florida State fans were up in arms last season about how the school was forcing Bobby Bowden to retire, but I think their opinion has since changed.  In just his first year as head coach of the Seminoles, Jimbo Fisher has brought FSU back to prominence after manhandling Florida 31-7 last Saturday evening in Tallahassee.  That win ended a six-game losing streak to the Gators, earned the Seminoles a berth in the ACC Championship game against Virginia Tech, and marked the first time since ’03 that FSU has won at least nine regular season games. 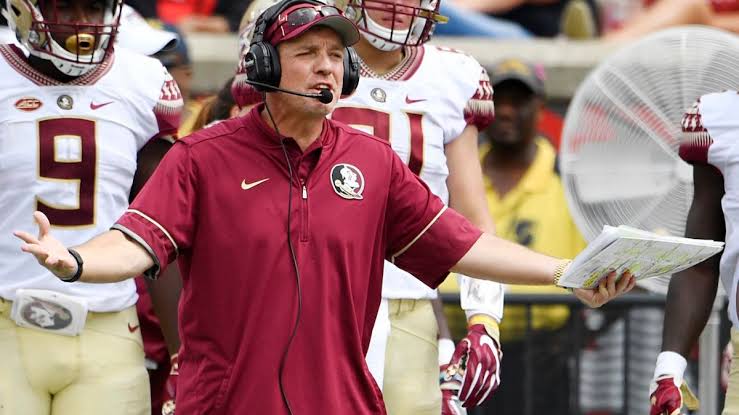 The team has come a long way since finishing with a 7-6 record three out of the past four years and the program is showing signs of a serious revival.  This weekend the ‘Noles are heading to the ACC title game for only the second time since the league split into two divisions, Atlantic and Coastal, in ’05 when FSU upset then-No. 5 Virginia Tech 27-22 in the inaugural game in Jacksonville.   If FSU wins this weekend they will head to a BCS bowl game and have a chance at an 11-win season, which by the way would be their first since 2000.  I know hindsight is always 20/20, but FSU fans now realize why the decision to force Bowden out was made.Jimbo Fisher joined 1270 the Team in Tallahassee to talk about whether he surprised they beat Florida the way they did, Christian Ponder’s great game against Florida, and whether the players felt the emotion of the fans during the game against Florida.

Whether he surprised they beat Florida the way they did:

“I thought we could win the game but to do it as decisive as we did and for our kids to play as well as they did that was a great thing for them.  The thing that I am happy for is our players, but our seniors, for what they have been through during their time here and to be able to walk off the field with a victory against Florida in their last game.”

What winning the turnover battle meant for the team in beating both Florida and Miami:

“There is no doubt.  We won the turnover battle, we won the special team’s field position, we created big plays and we stopped big plays.”

Whether Christian Ponder and the offensive line called out Florida’s blitzes before each play:

“They did, and he sets all of the protections.  Our lineman have got to block them, which they did a tremendous job, but he puts them into position telling who has got to do what by his calls and what goes on and I could tell everybody that you don’t realize what the guy does.  It is not all in numbers and we saw when receivers ran good routes, which I thought we really did the other night and we can protect him, like I said he is as good as anyone in the country and I was happy for him to go out in the way that he played.”

“He really did, I mean he was almost flawless in the game and for him to have a chance and for him to lead us to an ACC Championship is great.  It is what he wants to do and like I say, you will never hear him brag about himself or anything and he will come back to work this week and work his tail off and get those guys to play well around him.”
His thoughts on the fans showing up to the game and packing the stadium and whether the players felt the emotion of the

fans during the game against Florida:

“I did and it made a difference in the game and for them to not to want to come to the game and have a good time.  I don’t understand that no matter who you are playing and that is what we have got to have every time we play in this stadium.  We held our court every time this season except one time and that was; we got down to the last play and didn’t make it.  That atmosphere and that environment, you want a better program?  Come to the game.  That creates.  The recruits are here.  They were amazed at what was going on.  That brings better players.  That brings recruiting.   It energizes your team.   I mean it is what it’s about, that atmosphere is what it is about.  To have a weekend in Doak Campbell, I don’t know anything better. That is my thing to our fans next year: Let’s do this every week.