Chris Pronger didn’t sound all too surprised that his former teammates Mike Richards and Jeff Carter were shipped away in separate deals last week as the Philadelphia Flyers have revamped their roster because he’s been there before.Pronger cited that he’s been the unfortunate beneficiary of being a moving piece in the salary cap era where teams move pieces in order to clear space financially and solidify different holes on their rosters. The Flyers defenseman has played with newly acquired goaltender Ilya Bryzgalov dating back to his days in Anaheim and feels Bryzgalov brings athleticism to his position. Philadelphia may finally have their solution in between the pipes according to Pronger. 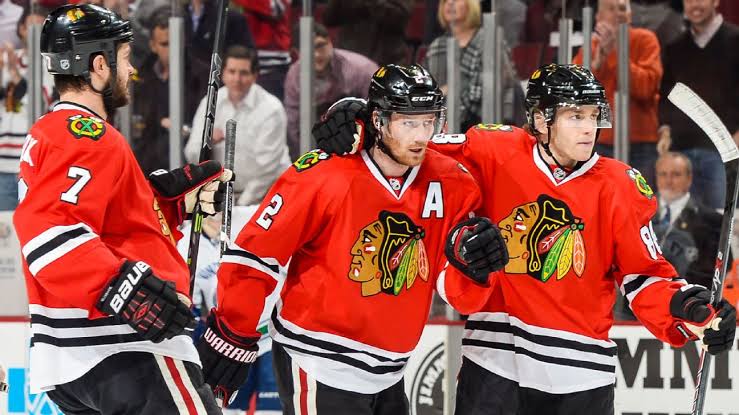 As for Pronger personally, he is still recovering from a multitude of injuries he sustained last season ranging from a broken right hand to a foot injury that limited him to just 50 games during the regular season. He still has another six weeks of light working out in order to allow scar tissue to heal. The Flyers will be surrounding Pronger with a few new pieces next year and he’s not too worried about losing Richards and Carter because he’s concerned about getting back to playing hockey the way he knows he can. Chris Pronger joined The Fan 590 in Toronto with Brady and Lang to discuss being shocked that both Mike Richards and Jeff Carter were traded last week from the Flyers, the Philadelphia Flyers being better off with Ilya Bryzgalov in the net and trading away both Mike Richards and Jeff Carter, what does Ilya Bryzgalov bring to the table for the Flyers, Peter Laviolette trying to get a hold of him after the Mike Richards and Jeff Carter trades were made and his health status going into next season.

How shocked were you when you found out that both Mike Richards and Jeff Carter were traded from your team?

“A little bit. Obviously they have been key components to the Flyers organization and team over their last six years. A couple of years if you are looking at the draft. In a salary cap era I have unfortunately been part of similar situations where in a salary cap era money needs to be moved around in order to pick up different pieces and solidify different holes and probably with the emergence of Claude Giroux and especially in the playoffs with James van Riemsdyk maybe that allowed the team to be able to part with these guys and pick up some younger pieces. A few guys that add a little bit of a different dimension in their game and allow them the opportunity to sign [Ilya] Bryzgalov. They have been and will be very good players in the National Hockey League.”

Do you feel the team is better off with Ilya Bryzgalov in the net and trading away both Mike Richards and Jeff Carter?

“Well we won’t know that for awhile. You can sit here and ‘armchair quarterback’ and speculate and do all the rest of that, but at the end of the day talk is cheap and you gotta go out and perform and prove it. The acquisition of Jakub Voracek, as you said Brayden Schenn and Wayne Simmonds and a couple of draft picks hopefully we’ve restocked our forwards and added some excitement and enthusiasm and some energy and some physical play. Look at Bryzgalov as being that goaltender that we have been looking for.”

You know Ilya Bryzgalov from your days with the Anaheim Ducks? What does he bring to the table?

“He’s a very athletic goalie. You look at what he did for the Phoenix organization. I mean their team hasn’t changed much over the last three or four years when he got in between the poles and I think two of the three years they got into the playoffs and had a couple of…last year they had Detroit on the brink of elimination and this year a tough playoff, but he did wonders for their team and obviously played extremely well and took his game to a whole other level from when I played with him in Anaheim with him knowing that’s he’s going to be the number one guy and him knowing that he’ll play 65-70 games. I think it’s that mental toughness and mental acuity that you know you are going to be playing every night and you know you can get into a rhythm and groove and start doing that.”

In the wake of the trades has Peter Laviolette tried to get a hold of you to talk about your role changing?

“No. Not yet. I think when obviously the trades were made it was right before the draft. A lot of preparation and what not needed to be done for the draft after those trades without the acquisition of some of the picks we got and now we are getting ready for July 1st. I’m not too worried about it. I have to worry about getting myself ready to get back on the ice and get healthy and help play hockey they way I can for the Philadelphia Flyers.”

How healthy are you? When are you able to get your workouts ramped out for the season?

“I still got another six weeks of light working out with respect to my back and can’t really ride the bike as hard as I would like or do anytime type of running or plyometrics or whatever the new age stuff that the guys do now. I can’t really do any of that. I’m still in the infancy stages of working out if you want to call it that. I didn’t do anything for six weeks and now for this next six week period I’m just kind of doing light bike rides, walking on the treadmill and trying to as the doctor put it allow the scar tissue to fully heal and cover up the surgically repaired area.”