After making it to the playoffs and then winning a first round playoff matchup against Memphis, the Los Angeles Clippers followed up their solid step in the right direction by completing several key transactions to start the offseason. The Clippers re-signed Chauncey Billups and Blake Griffin, and added both Jamal Crawford and Lamar Odom to add depth and versatility to the top heavy roster. All told, there are reasons to be excited about the future of the Clippers. However, for Chris Paul he has other things on his mind right now. It’s not his free agency in the summer of  but it’s another shot at Olympic Gold.The United States team has been put together and in a few weeks the team will be heading to London. Recently Kobe Bryant said he thought this year’s Olympic squad could beat the Dream Team from While that seems a little bit ridiculous and is pretty comical, this team has the look of one of the best ones ever put together. 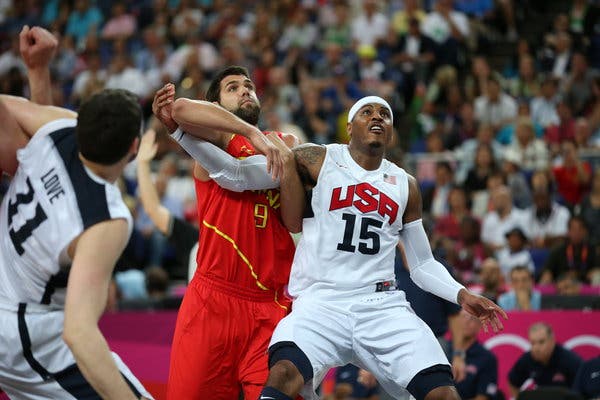 Chris Paul joined ESPN Radio in New York with Mike Lupica to talk about how excited he is to play in the Olympics again, whether he thinks the 2012 Olympic Team could beat the ’92 Dream Team, if he is taking notes on how not to handle free agency this offseason, on trying to overtake the Lakers as the team that’s the focal point in Los Angeles, whether he has thought about going to New York to form a super-team.

How excited he is to play in the Olympics again:

“Words can’t describe it. It’s funny because during the season when people think about USA Basketball or playing over the summer, over the course of the season guys are going to be like ‘man I’m a little tired or whatnot’ but as soon as we get out here we’re so excited, we’re so excited and can’t wait for the opportunity to represent our country again.”

Whether he thinks the 2012 Olympic Team could beat the ’92 Dream Team:

“Obviously I’m a little biased because I’m on the team. The ’92 Dream Team was pretty remarkable and unbelievable and I think this year has the opportunity to be special. Everyone tries to compare us to ’08 but there’s no question that I think this year’s team can be better than ’08 because all of us are so much better players than we were four years ago.”

On what happened last offseason with him going to the Lakers and the trade getting nixed:

“It’s crazy because it’s such a blur now and I really don’t remember too much of it. Everything happens for a reason, I had to move on and luckily I still landed in Los Angeles.”

Whether he is taking notes on how not to handle free agency in the offseason given the Dwight Howard stuff:

“No. actually I had the opportunity to do that about a year ago. I was going to be a Free Agent this summer so I don’t know, I don’t pay attention to too much to tell you the truth. I love what I do, I have a family, I try to enjoy my family as much as possible and I go out and play basketball. Everything else will take care of itself.”

On the Clippers trying to overtake the Lakers in LA:

“No question. One of the first things I learned when I got Los Angeles was everything was Lakers. Being that we’re in the same division you obviously have to beat that team but you have to look at the bigger picture also. It does you no good if you win the cross-town rivalry every year but you’re still not getting to the playoffs or you’re still not getting to the Finals. At some point in time you do have to get over that hurdle.”

Whether he has thought about playing in New York with the Knicks and forming another super-team:

“Obviously anything is possible but that’s not what is on my mind to tell you the truth. I’m all about the Clippers and what we can do to win in Los Angeles. I’m so excited that my guy Blake (Griffin) just signed his extension last night. I was probably happier for him than he was for himself. The fact that we signed Chauncey (Billups) back, Jamal Crawford and brought in Lamar Odom that’s the only thing that is on my mind right now.”