Has been the date circled on many NBA Superstars and general managers’ calendars for quite some time.  That day, also known as the ‘Date of Destiny’, has been talked about for ages since LeBron James, Dwyane Wade, Chris Bosh  and Amar’e Stoudemire among others, are set to become free agents.  One of the free agents that has not been talked about much is Carlos Boozer.  Boozer, who has been overshadowed by most of the other marquee free agents, is one of the most fundamental power forwards in the game today and has averaged a double-double during his eight-year career.  Like every other free agent in the NBA, Boozer is waiting for LeBron James to make his decision before he decides to make his move.Although he has not flat out said he wants to play in Miami, Boozer has recently professed his love for the city of Miami but hasn’t ruled out a return to Utah either.  After all, his ties run deep within the Heat organization as he is good friends with Nick Arison, Erik Spoelstra and Dwyane Wade.  Boozer and his family also live in south Florida during the offseason and are currently in the process of moving from Coconut Grove to Coral Gables, so the move to play for the Heat would be rather seamless.  Boozer seems to be the right fit for Miami, and if they choose to re-sign Dwayne Wade, he will be a happy man. 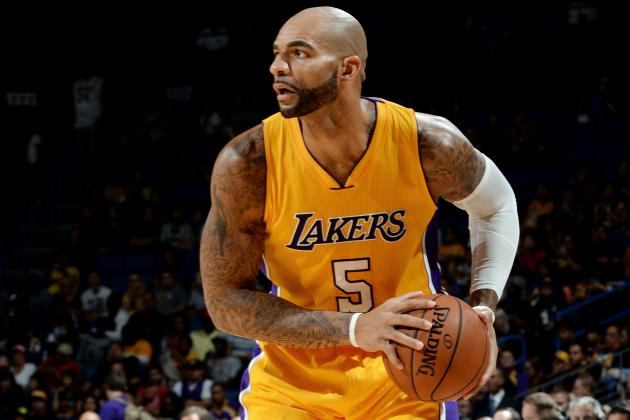 Carlos Boozer joined WQAM in Miami to talk about whether he wants to play for the Miami Heat, whether he has to get a little pissed off that his name isn’t brought up with the other marquee free agents, and this year’s free agent class waiting on LeBron James to make his move before they make any moves themselves.

Whether he wants to play for the Miami Heat:

“You never know what is going to happen in July.  I look forward to what is going to happen out there and seeing where everybody goes and seeing what happens with me.  Which I stay in Utah, which is an option of course, or something happens where I end up going somewhere else.  Not to say that I don’t have anything to say about not coming to the Heat or coming to the Heat.  I am going to rest it and see what happens in July.”

On how his child of feeling:

“Carmine is doing great.  We had sickle cell anemia a few years back.  We did a bone marrow transplant to cure him of the sickle cell and now he is absolutely cured.  He just turned four yesterday and he is doing completely…  Thanks for asking by the way.  Because of Carmine, we started a foundation called, Boozer Buddies Foundation, and to raise money to help those kids, who were like my son and had sickle cell anemia, to afford the bone marrow transplant or the doctor’s bills or the medicine it costs to help deal with a kid who has that disease and we do camps here in Miami and all over the country in New York, the Hamptons, Salt Lake City, Alaska, where I grew up at in high school so we can raise money to help those kids out.”

Whether he has to get a little pissed off that his name isn’t brought up with the other marquee free agents:

“No, not at all.  I don’t think anything about that.  Those are great players.  All of them are studs in their own right and they should be talked about.  Those guys are stud basketball players.  I am going to tell you, for me I just try to go out there and work hard to try to get my team a championship.  It is tough to, and you are talking about all of this free agent stuff, the most important thing to me right now is the Finals and I’m mad that I am not in the Finals.  That is a goal of mine.  I want to win a championship and hopefully what happens in July can lead to that.”

On this year’s free agent class waiting on LeBron James to make his move before they make any moves themselves:

“You are right about that.  Now obviously LeBron is a stud.  He is either the best basketball player right or behind Kobe Bryant and obviously where he goes and that will determine where everybody else goes and what happens next with the rest of our free agent class this summer, but it is going to be interesting to see what happens.  Just like you, I am looking forward to seeing what is going to happen as well.”
Carlos Boozer on WQAM in Miami with Sid Rosenberg