Bob Arum: “In all the years that I have been in boxing I’ve never seen a more ridiculous decision”

Bob Arum and people all around boxing have summed up what happened Saturday night between Manny Pacquiao and Timothy Bradley perfectly already. It was an absolute travesty. It was an injustice to the sport, to the fighters and to all of the fans that spent money on the fight. For 12 rounds Manny Pacquiao overmatched and out-classed Timothy Bradley and a few times it looked like Bradley’s legs turned to jelly as he was staggered by Pacquiao. The final punch numbers showed a dominant performance by Pacquiao but it didn’t take the CompuBox numbers to realize who the better fighter was. All it took was common sense and a good set of eyes. One of the two, if not both, were lacking from the judges Saturday night. After 12 rounds, it was clear that Pacquiao won the fight and his winning streak was set to reach 16. Then the announcement was made after the scorecards were handed in. Timothy Bradley was awarded a split decision win over Pacquiao and the judges gave the sport of boxing yet another black eye and the conspiracy theories will pick up even more steam. 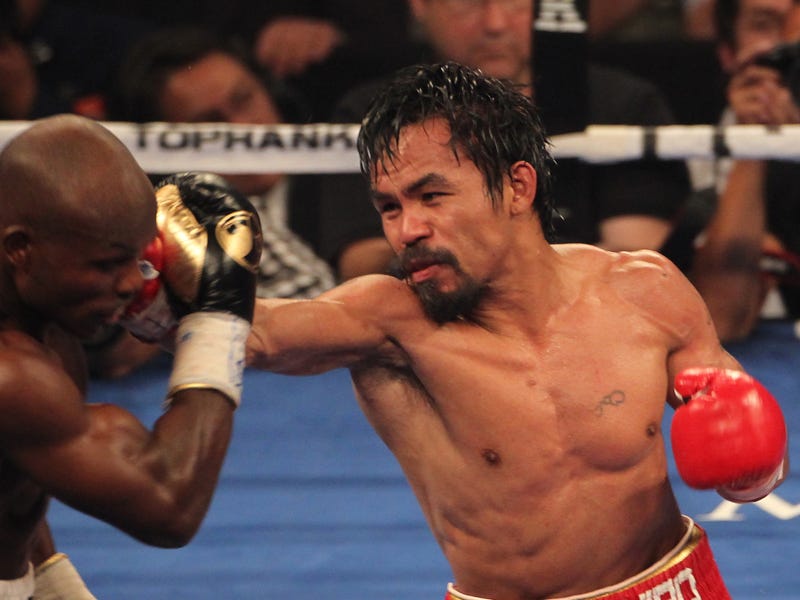 Bob Arum joined Fox Sports Radio with Ben Maller and Tom Looney to talk about the decision in the Pacquiao-Bradley fight, why Pacquiao didn’t just knock out Bradley to take the fight out of the hands of the judges, on Bradley holding up a poster of a rematch on May 29th, how common it is to have a rematch scheduled before a fight even takes place, if a decision like this will generate more interest when the rematch comes around and whether it can be spun that this kind of decision is good for boxing because it has people talking about the sport.

On the decision in the Pacquiao-Bradley fight:

“We know the decision was ridiculous. We know that Pacquiao won the fight at worst ten rounds to two. In all the years that I have been in boxing I’ve never seen a more ridiculous decision. That being said we now have to determine who was responsible for this terrible result and that’s why I’ve asked the Attorney General’s office in Nevada to do a thorough investigation because people think the worst, that somehow it’s the promoter who wanted this result to happen to get a rematch. That is just not true but the only way that can be determined is a complete and thorough investigation of the circumstances around this horrible, ridiculous, absurd decision.”

On why Pacquiao didn’t just knock out Bradley to take the fight out of the hands of the judges:

“If Bradley had continued to fight as aggressively as he had fought in the earlier rounds Manny would’ve knocked him out probably but Bradley eased up in the last three rounds and once a fighter eases up he becomes very difficult to knock out.”

On Bradley holding up a poster of a rematch on May 29th:

“We put him up to that and we did that for great publicity, little realizing that it might come to fruition.”

How common it is to have rematches in place before a fight even takes place:

“Of course. Every one of Pacquiao’s fights, against (Shane) Mosley and against (Miguel) Cotto. (Host: Same thing with Ali’s fight back in the day?) Yeah we have an option to do a rematch. It’s nothing new.”

Whether this kind of result could create more interest in a rematch:

“That’s something to be determined because if Manny’s hand had been raised in victory as it should’ve would there have been interest in seeing another fight with Bradley? The answer is probably not very much interest. Because of this crazy decision would there be interest? Probably more interest but I don’t know how much.”

Whether it can be spun that this kind of result is better for the sport because now people are talking about boxing:

“Anything can be spun. We know that from our great politicians. I don’t really know. Everybody on the promotion was rooting for the Celtics to win the sixth game so there wouldn’t be a seventh game on Saturday. The Heat won the sixth game so now there was a seventh game. We took lemons and made it lemonade because we showed Pacquiao watching the game on television, ESPN publicized that we wouldn’t start the fight till after the game was over. We probably picked up 100,000 buys that way. Who knows? Spin is wonderful.”