The Los Angeles Lakers needed someone to accompany Steve Nash and Kobe Bryant to the Early Bird Special so they signed 36 year-old Antawn Jamison this offseason.  It’s obvious, the Lakers are in win now mode and there’s still an outside possibility that they can add Dwight Howard to the mix.  Jamison is a good fit for the Lakers as they desperately need scoring off the bench.  Even after 14 seasons in the NBA, he’s still one of the best players in the game moving without the basketball and should play a major role in the Lakers quest to return to the NBA Finals.Antawn Jamison joined ESPN Radio in Los Angeles with Mason and Ireland to talk about how nice it will be to play with Kobe Bryant, on playing with Steve Nash earlier in his career and how playing for Mike Brown again. 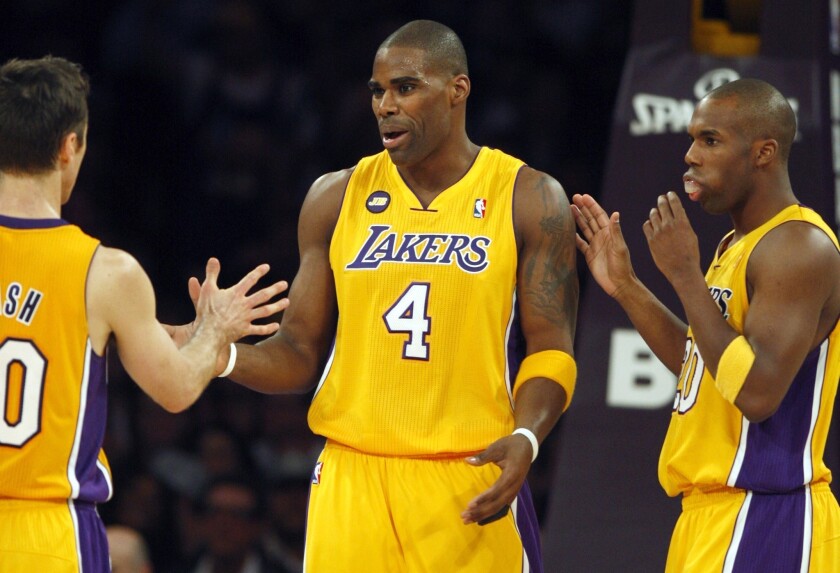 How nice it will be for him to play with Kobe Bryant:

“It’s almost like knowing you have Michael Jordan as a teammate. As an opponent this is the guy that you try to find any and every scenario to make it difficult or not make him successful or this Laker organization successful and time and time again this guy has prevailed. In my era he’s probably the greatest to ever play the game and for me to call him a teammate and know what he brings to the table, to me to know the determination that he has and the ultimate goal that he wants, most guys have five rings and are on top of the world and you can’t tell them nothing, but this guy acts like he’s never won a ring, he wants that sixth one and to be his teammate and to be a part of this Lakers organization is for me the ultimate high and definitely the highlight of my career. This being my fifteenth  year and for me to say that it really lets you know how important this situation is and how ecstatic I am to be here and be part of the Lakers family.”

On playing with Steve Nash earlier in his career:

“At that particular time it was the first time that I was part of a situation where you had three superstars on one team. You had Dirk Nowitzki, Steve Nash and Michael Finley and the one thing I remember about that year and playing with Steve, you know I worked hard to get points, I worked hard to get opportunities to be successful but for me it was the easiest and I think highest field goal percentage I’ve had throughout my career because I just put my hand out and the ball was there. Steve Nash understands the game, understands the way a point guard should play the game, he makes his teammates better and I cut and it was right there underneath the basket and it was the most layups, the most open shots I’ve ever had and I can’t wait to have that feeling again because it’s been a long time. I think ‘03-‘04 might be the last time I had an opportunity to shoot an open jump shot or open layup.”

How the presence of Mike Brown helped his decision to go to LA:

“He actually made it even more easier because I know what he expects out of you, the attention to detail offensively and defensively and not saying he’s on this level but it reminds me of the things I learned from Coach (Dean) Smith at Carolina with the film sessions, being held accountable for everything and knowing him as a coach during that short stay I had in Cleveland and knowing this was an opportunity where I could’ve came here and I just know the familiarity with the coaching staff and Coach Brown and I know what he will expect out of me. Even last year when we played against each other he said ‘miss you man, wish you were here and good luck.’ Just having a coach who you used to play for wishing you those types of things just made it genuine. He made the decision a lot more easy. It’s been 5 years for me and I’ve probably played with 11 or 12 different coaches and he’s by the far one of the coaches that I have the utmost respect for.”