A.j. Mccarron On Alabama Bcs National Championship Win: “we Came Out And Proved That We Were The Best In The Country”

In a perfect world, college football would have some kind of playoff system that preserves the meaning and excitement of the regular season while also making it easier to crown a true national champion in some sort of well-conceived playoff format. But it’s not a perfect world. There’s no question that the BCS needs to be changed or tweaked, but it was put into place to identify the two best teams in college football and have them play against each other. It was also designed to find the best team in college football. Last night the BCS succeeded.Alabama dominated LSU from start to finish. The Tide, even though they struggled on offense for much of the night against the Tigers stifling defense, made LSU look like anything but a previously undefeated SEC power.  There’s no argument. Oklahoma State fans don’t have a beef. The Cowboys lost on the road against Iowa State and barely snuck past Stanford thanks to the Cardinal missing a field goal late. LSU doesn’t have a beef either. Even though they split the two games, Alabama was the better team in both meetings. The Tide beat themselves the first time and LSU benefited from Alabama’s shoddy kicking game. Then on the game’s biggest stage the Bayou Bengals were outcoached, outclassed, and outplayed in every way possible. LSU had 11 drives last night and the longest series went just 23 yards. They passed mid-field just once against ‘Bama. It was a dominant performance by the Tide and left no doubt. Conference title or not, undefeated season or not, Alabama proved last night they are indeed College Football’s best team. 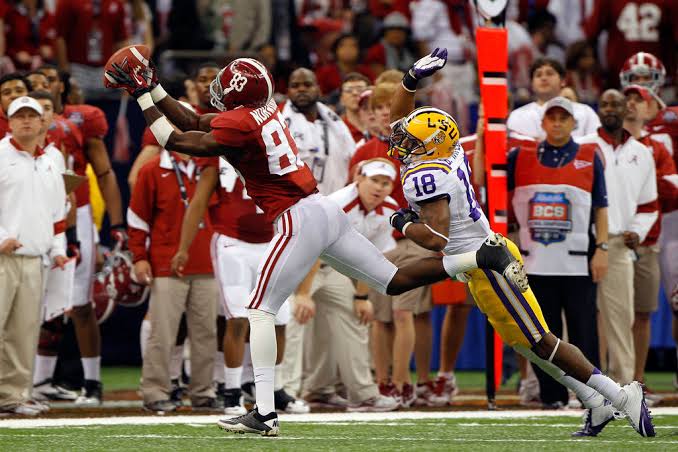 A.J. McCarron joined 790 the Zone in Atlanta with Mayhem in the AM to talk about if he was happy the coaches showed more confidence in him to throw last night, if he wanted to show more emotion last night in the National Championship game, whether or not Alabama used the critics who didn’t think they deserved a rematch in the title game as motivation, if he had a chance to admire his defense from the sidelines, and if he has had a chance to digest what the win last night meant and him being MVP.

How happy he was that the coaches showed more confidence in him to throw the ball:

“Definitely. Coach told me that more weight was going to be put on my shoulders and I was glad that he gave me that opportunity to make plays for my team.”

Whether or not it was his goal to show more emotion last night than he did in the first meeting between the two teams:

“I just didn’t show emotion like I always do. I always play with emotion and that’s something I didn’t do the first game. I felt like personally I had to come out and play better for my team the second game. I didn’t really play that bad the first game but I just didn’t play like myself and that was something I wanted to do for my teammates because they deserved to get this win tonight.”

Whether or not Alabama used the critics as motivation last night:

“Like coach always says you can’t really worry about what everybody else thinks. That’s the system they picked, we did our best as a team to get back to that opportunity, and show the world we deserve a second chance. Felt like we did that after the LSU game the first time and we showed the world that we let it slip away. We didn’t get beat the first time, we just let it slip away ourselves. We came out and proved that we were the best in the country.”

If he had a chance to admire the play of his defense:

“I definitely did sitting on the bench. That’s nothing different from that defense. They come out every week, especially in practice. We see that every week which makes us better as an offense. Everybody that doubts our offense, it’s pretty funny because we fly under the radar but we broke records for the school and we were the most scoring offense in the school history and we led the country in the SEC for a while in offense, scoring, and a bunch of different categories. We flew under the radar all year long but that’s what we like. We like to not really be thought about as a threat so we can go out and prove people wrong.”

If he had a chance to digest what happened last night yet and the kind of company he is now in at Alabama:

“I haven’t had a whole lot of time. I’ve been eating with my family, going out with my friends after the game, and I haven’t really had a whole lot of time for it to kick in but I’m sure once I wake up after I fall asleep, I wake up turn on ESPN it’ll be something special to see and just realize it’s always been a dream for my family that they always wanted me to play quarterback for the University of Alabama and the fact that we did it and we won it, it’s gonna be cool to go down in history like that.”

On playing for more than just a Title last night:

“Yes sir. Definitely. We didn’t just play this season for ourselves. We played it for the city of Tuscaloosa. Not only did we go through a devastation like that and a lot of people losing a lot of loved ones and it’s basically tearing the city apart but we also lost one of our teammates earlier in the year and to come out and win it for him, we know that he’d want it more than anything. We just had a lot to prove to our city, to our team, and make the state stronger in the end. Felt like we did it.”