The first big transaction of the NFL offseason has reportedly been agreed upon. It was announced that the Kansas City Chiefs and San Francisco 49ers have agreed to a trade that will send 49ers back QB Alex Smith to KC in return for future draft picks. After a rocky start to his career and getting showered with boo-birds, Smith was finally starting to show the promise that once made him the first overall pick in the draft. Then everything changed when Smith got a concussion and missed a big Monday night game against the Bears. The injury opened the door for Colin Kapernick, the team’s quarterback of the future, to show he was ready to take the Niners offense to the next level. Harbaugh had no reason to give Smith his job back. Through it all, Smith remained classy and professional and now will be rewarded with a starting quarterback job in Kansas City, one that he very much deserves. 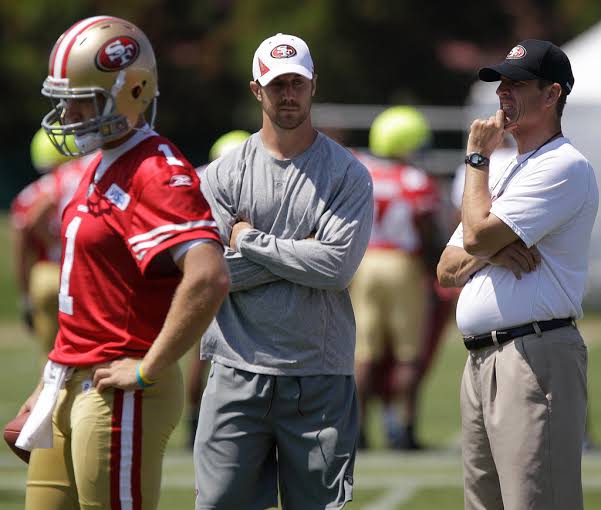 40ers center Jonathan Goodwin joined 95.7 the Game in San Francisco on the Wheelhouse to talk about what he thinks about the Alex Smith news, whether he has reached out to Alex Smith since this deal went public, if he thinks Scott Tolzien can be a capable backup to Colin Kaepernick, how often he has gone to replay the ending of the Super Bowl and what he makes of the beef between Terrell Suggs and Anthony Davis.

What do you think about the Alex Smith news?

“I’m happy for Alex. He’s a guy that was a great teammate and a guy who over the past year and a half played well. All season long I said it was a tough situation having two quarterbacks playing lights out. I know every true competitor, which I believe Alex is, wants to be on the field. If the trade is going to happen then I’m happy for him. I’m glad he will get that opportunity to get back on the field because quarterback is a position where you can only have one guy out there at a time.”

Whether he has reached out to Alex Smith since this deal went public:

“Up until this point I haven’t, but like I said yesterday he’s definitely been the ultimate pro. Alex came to work, even when he wasn’t playing anymore, and he still came out, worked hard, prepared hard, helped Kap (Colin Kaepernick) in any way he could and his attitude didn’t change in the locker room. A lot of guys in that position would go around with their head down or try to put up a fuss and Alex did that in no way.”

If Scott Tolzein can be the backup to Colin Kaepernick:

How often he has gone back to replay the end of the Super Bowl this offseason:

“I watched the film the next day on the plane on the flight back out to California and naturally as an offense you want those plays back because they didn’t succeed, but all we can do is move on because who knows, if we had different play calls we might not have gotten in. Naturally when you throw the ball a couple of times and you don’t get in everybody says you should have run the ball. As an offensive lineman of course I want to runt he ball but I believe in what the coaches called and we didn’t get it executed. If we would’ve gotten five more yards we would be sitting here having a different conversation but that didn’t happen. We just have to come back and from last year to this past season we were able to take another step and hopefully that is something we can do next season.”

“The funniest thing about this is one of my good friends is getting married to Suggs’ sister this weekend so there is a good chance I am going to run into him this weekend, but both of those guys are great competitors and in this sport you’re not always going to see eye-to-eye on everything. Two great competitors and no need for me to jump in. AD can handle his own fights, I don’t see him backing down from anybody and he’s a guy that took tremendous strides this past season. He’s one of my good buddies and I see his career only getting better from this point on.”