Timothy Bradley is coming off a night where he kept his unblemished record intact and captured the biggest win of his career. For Bradley, this should be a time for great celebration after beating Manny Pacquiao. Instead of enjoying this victory though, Bradley has had to deal with massive amounts of criticism. To make matters worse, he has also been glued to his wheelchair because of his ankle/foot injury and has received death threats on Facebook, Twitter and via e-mail. The decision has been talked about all over the boxing world and was a disappointing result to say the least. It was a fight where Pacquiao should’ve been awarded the victory. However, fans have officially gone overboard with their anger and they are targeting the wrong person. 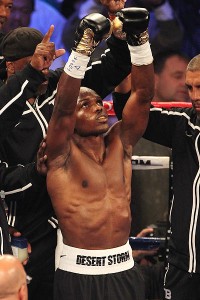 Timothy Bradley joined ESPN Radio Chicago with Waddle and Silvy to talk about what hurts him more between the ankle injury that he suffered Saturday night and the beating he has been taking from people that feel like he lost the fight against Pacquiao, whether he thought he won the fight Saturday night, if he has received death threats from this, if it is true that he told his promoter, Bob Arum, that he felt he lost the fight and what he makes of people saying the fight between him and Pacquiao was fixed.

What hurts more between the ankle injury and the beating he is taking from people that thought he lost the fight to Pacquiao:

“Both actually man. I’m the type of guy that likes to get around and I pretty much have to be in a wheelchair and I can’t walk on my ankle so that’s been a bit draining for me. I can’t do what I want to do and can’t spend time with my kids and that’s painful for me. Then also the whole criticism and everything in the media, I can’t really enjoy my victory. That sucks as well but it’s all good, it’s part of boxing. Right now I’m like the most hated fighter on the planet.”

How he thinks he fared in the fight against Pacquiao:

“I fought my fight. I fought the best I could that night given my injuries but I’m not the one to blame. I’m not the one to blame for the results. The judges saw the fight the way they saw the fight and that is that. They had some really professional judges out there and some really good judges out there and Duane Ford is one of the best judges out there and he picked me. What do you want me to do? I thought the fight was close after the fight. I wasn’t sure if I won it or not. I was like ‘I’m in Vegas and never know how the judges are going to judge it. I know the fight’s really close.’ My corner was telling me ‘you won the fight, you won the fight’ and that was the reason they raised me up after the fight. I felt that I won the fight. I started hearing the actual scoring. The first one said ‘Pacquiao,’ second one was for me, I heard the same 15-13 and I was like ‘oh yeah I’ve got this without a doubt’ and you saw me raise my hands up before the last score and then boom I knew. There were some people sitting ringside that thought I won the fight and a lot of people didn’t feel like I won the fight and it is what it is. I think they were pretty much focused on Pacquiao and didn’t really focus on what I was doing in there. The judges were clued in and focused on the fight and they scored the fight according to what they saw.”

On the death threats that he has been receiving:

“Definitely on Facebook and Twitter, reading people’s comments, e-mails and people are sending me like death threats, telling me to die, telling me to give the belt back, ‘if you’re a man’ and all this hate mail. Just people being really rude like I’m the one to blame. ‘If you’re a real champion and want any respect from me then you’d give the belt back.’ I’m like ‘dude I earned the belt and I’m not giving the belt back.’ Anybody out there that thinks I should give the belt back, the belt is not going back. I deserve the belt. I won the fight regardless of what anyone thinks. The judges thought I won the fight and that is that. I’m not the one to blame here. Don’t be pointing the finger at me, don’t be sending me crazy e-mails and things like that because I really don’t care.”

If it is true that he told promoter Bob Arum that he felt he lost the fight after the decision was announced:

“That is not accurate. That is a complete lie. I told him I did my best and I said ‘I have injuries and did my best.’ That was it. I never said that I lost the fight or I couldn’t beat this guy. I never said that. I thought I was in the mix the whole time. I would’ve done a lot better if I didn’t twist my ankle or mess up my ankle in the fight. I would’ve done a lot better. I had to suck it up, suck up the pain from the second round all the way to the 12th round. I went in there with one of the best fighters in the world pound-for-pound, injured, and he still couldn’t stop me, couldn’t knock me out, couldn’t put me on my behind so that says a lot about me man. He stopped (Miguel) Cotto, he badly beat up (Joshua) Clottey, badly beat up (Antonio) Margarito, he dropped Sugar Shane Mosley and he couldn’t put me on the canvas, my face is clear, no big lumps or bruises on my face, and I’m telling you I gave this guy hell.”

What he makes of people believing the fight between him and Pacquiao was fixed:

“Oh my goodness that is crazy man. I don’t understand how people can think that honestly the fight is fixed. You can’t pay me enough money to bail on a fight or for Manny Pacquiao to bail on a fight. We’re fighters and we get in the ring and we’re going to win. We were knocking each other’s head off. I got hit with some big shots, I took them and ate them dude. For a fight to be fixed that’s just impossible. I think that’s just stupid. Being that Manny Pacquiao is his freaking cash cow, that’s the biggest fighter in boxing right now next to Floyd Mayweather so why would he want him to lose? That makes no sense to me. I really don’t understand how people can say that. I felt that I was going to win the fight from day one and I ended up winning the fight. On a controversial split decision or whatever but it is what it is but no, the fight is not fixed at all man. I fought the best I can and Pacquiao fought the best he can that night. The judges are the ones to look at. They scored the fight. Not Bob Arum, not myself and not Pacquiao. They have nothing to do with this. It all boils down to the judges so if anybody wants to come to anything, wants to sit down and watch the fight with the judges and let them explain to you why they did it the way they did it.”