It’s not too often that we’ll hear from members of an officiating crew here on SRI. Particularly when the refs aren’t in the news for something controversial. But let’s take a listen to Rob Vernatchi, one of the officials who worked last Sunday’s Super Bowl. Vernachi joined KHTK in Sacramento to talk about how he knew the Saints were going to try the onside kick, how it was the longest scrum he’s even been a part of, how he got some bad scrapes and cuts from being at the bottom of the pile, and why the replay crew ruled Lance Moore made the catch for a successful 2 point conversion in the 4th quarter of New Orleans’ 31-17 victory over the Indianapolis Colts. 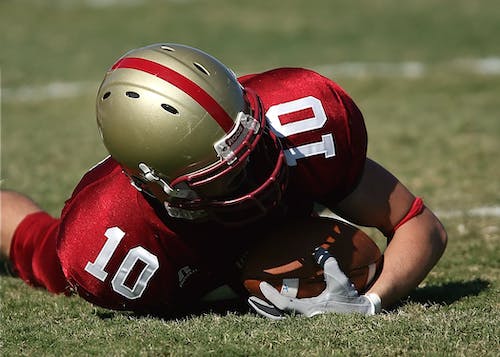 On how he and his crew knew that New Orleans was going to be trying an onside kick:

“That was, in all the years I’ve been officiating that was the longest one I’ve ever been involved in. There was an onside kick obviously and I’ll tell you a little story about this kick. Prior to the game, I and my partner (a line judge), were going to the home team to get information regarding captains and any plays that they’ll run. The other two guys across from us – the side judge and the other head linesman went in to the New Orleans locker room before the game, and they warned us they were going to run an onside kick. Prior to the game they told us this. We want to know if anything’s going to be a surprise. It’s to our benefit, especially on onside kicks. Onside kicks are bizarre. The ball bounces funny. So we knew about it. And we also knew it was going to be around the third or fourth kickoff, if they did kickoff that many times. And also it was right footed kicker and he would kick across his body. So we all knew this. So we came back out, and you know what…we had all the information in the world but we were still surprised. The guy kicks off and the ball comes towards me and it hits [Hank] Baskett in the helmet or the hands, and it rolled over to the New Orleans guy and it comes in between his legs. So I dove in. Somebody’s got to go in there and secure the ball because once that ball goes down there, it’s going back and forth. Anybody will come out with it. And sure enough, that thing went back and forth and I was the unlucky one down at the bottom of that pile and finally the New Orleans guy came out. It was just survival of the fittest, that’s how we ruled on it. Quite frankly, that ball was bouncing around down there and there’s no way you can secure it and none of us are strong enough to pry it from any of those guys.”

On if he suffered any injuries down at the bottom of that scrum:

“Yeah, I’ve got a pretty good scratch on my face and my hand was cut up pretty good. Yeah, I took a little pounding.”

On the challenge call on the 2-point conversion:

“Well, originally we have a philosophy…I don’t want to use the word philosophy but that’s what it is – if a receiver goes to the ground on his own or with contact and the ball comes out, it’s an incomplete pass. He’s got to maintain control. And that’s in the field of play. When we’re in the end zone, if he controls the ball and he has possession, and he’s able to control and cross the goal line, we’re going to rule a touchdown because all he has to do is break the plane. To have a catch you have to have one foot or a body part down on the ground. In this case, they went to replay and decided he was able to do a football act. And that’s how they used it. So he controlled the ball, and then the ball momentarily came loose and then we was able to re-control it again and reach across, and replay felt – the guys in the booth – felt that was enough to constitute a catch and therefore it was a 2 point conversion.”