A key AFC North game this weekend will be the Baltimore Ravens taking on the Pittsburgh Steelers, in what is sure to be a great game with two of the NFL’s best defenses squaring off against one another.  Baltimore picked up a 24-17 win over Cleveland on Sunday behind the play of Joe Flacco and Anquan Boldin’s three touchdown receptions.   It was a relief for the Ravens, who only scored just nineteen points in their first two games, to finally get the ball moving on Sunday. As usual, Baltimore’s defense is led by Ray Lewis and they are ranked near the top of the league, allowing just a shade shy of one-hundred twenty yards per game.  What is unusual is that they are playing without Ed Reed and they have had to deal with a rash of injuries, but they seem to not have lost a step.  Give credit to John Harbaugh and his coaching staff for developing his players and keeping them ready to play at any time.  Sunday’s game is sure to be a low-scoring, defensive affair, so may the best defense win. Ray Lewis joined WFAN in NY with Boomer and Carton to talk about whether he expected the defense to play as well as they have to start off the season, whether the Steelers or Ravens have the best linebacker group in the NFL, and whether he has any word on the health of Ray Rice. 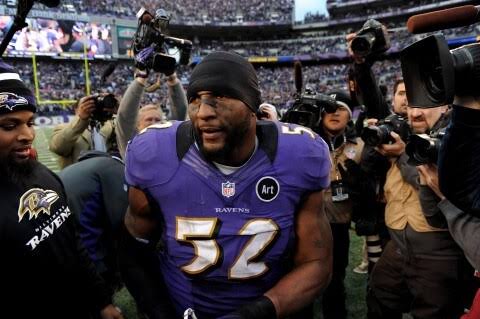 Whether he expected the defense to play as well as they have to start off the season:

“I think we always set the standard very, very, very high.  I just think that dealing with the injuries that we have dealt with already in our secondary and things like that, I think the hat goes off to our defense the way we have been playing because it has always been the next man up, and the next man has really stepped up for us and I just think overall we are just playing some very aggressive and good defense.”

What was going on between he and Mark Sanchez during the Jets game and whether he was trying to intimidate him:

“I think it was more of just giving him the business.  I think it was more of just really…  Boomer, you get into that game that game was one of those games some games you play the corporate level and some games you play just the pissed off level and that one was just one of those pissed off games.  (Host: I can imagine this week is going to be one of those games.)  Oh yeah, the same thing, the same thing.  When you get like that some things can become personal, you know that.”

Whether he has talked to Rex Ryan about all of the backlash he has been receiving and what he thinks about that:

“No, you know what, I haven’t talked to him about that, but at the same time, like I said, that is just because Rex is now being shown to the world more.  Rex has always been that way and I mean that is just Rex.  That is totally who he is.  When you got you ready to play a football game on Sundays you knew what you were going to get and he is going to back you and you were going to back him.  That is just the way he is.  Like I said, I know people put a lot of stuff on a lot of things, Oh he is this, the discipline and that and whatever.  But I think that goes per man.  Every man has to take care of himself.  Every man receives a pay check.  Every man is accountable to that organization.  So they have to patrol themselves.  I just think overall that Rex is just an awesome person and an awesome coach.”

Whether the Steelers or Ravens have the best linebacker group in the NFL:

“Am I a little biased here?  I just think that we both have two solid, solid groups.  The thing that you see most about the groups is that we have played with each other for some years now.  Definitely, me and Suggs and things like that.  We keep losing people here and there but we keep getting a couple of guys to step up here and there.  Pittsburgh has been playing together for years as well and that is what I think that creates that type of unit to where you can play.  Free agency is so crazy these days you just never know who is going to be where, what year and everybody is chasing the big bucks, and truly understanding it and respect it.  But keeping these units together isn’t like the Pittsburgh back in the day when they were able to keep Lambert and these six or seven linebackers.  We can’t do that nowadays so if you are able to keep one or two good ones then guess what, you can create something going around them.”

Whether he has any word on the health of Ray Rice:

“You know what, he had just called me before I got on this line but I talked to him yesterday when we got to the team meeting and stuff.  One thing that he was walking fine and he did say the MRI showed no ligament damage and things like that.  So that is always positive news.”

What the status of Ed Reed is:

“He is doing good.  He is doing good, man I am telling you.  His rehab is going great and you see Ed out there walking around, man he looks like one of those Roman warriors walking around with these little bodysuits and stuff on.  He is working so hard and is feeling so good, so it is going to be a good addition to have him back definitely for the rest of the season as well.”