You have got to give it to John Calipari. Everywhere he goes, he wins. When he took over the head coaching gig at Kentucky, the Wildcats were more of an also-ran in college basketball, a middle-of-the-pack team in the SEC. Calipari took over three years ago and it didn’t take him long to bring the ‘Cats back to prominence. In his first year at Big Blue Nation, he won 35 games, got his team to the Elite Eight, and sent five players to the NBA’s First Round of the Draft. Even though he had a team less talented a year ago, he was able to take yet another group of young ‘Cats a step farther. After a Final Four appearance last year, Cal landed this third straight number one ranked recruiting class and has another loaded team that is ready to make a run at a National Championship, the first at Kentucky since. John Calipari joined ESPN Radio New York with Mike Lupica to talk about the team that he has this year, the landscape of college basketball in general, how he feels about last year’s team that he took to the Final Four, if he thinks he would be able to solve the lockout in the NBA, and what he thinks of players in the NBA going on world tours. 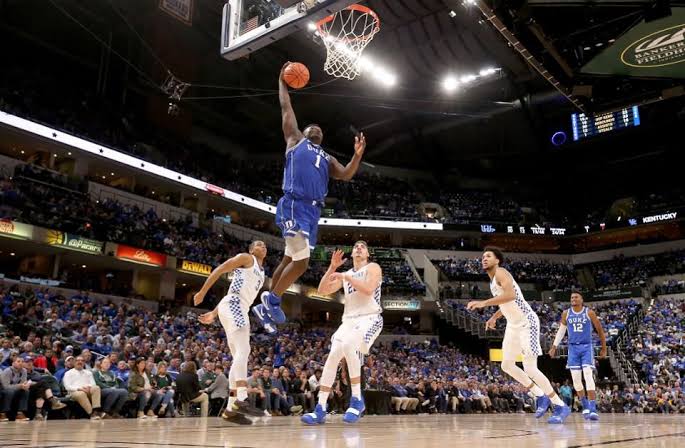 On why anyone wouldn’t pick Kentucky number one:

“Well the reason you won’t pick us number one is because you’re my friend I hope. It’s way, way early to tell, but this may be one of those years – you remember 2008 that all four number ones went to the Final Four and throughout the whole year those teams were above everybody else – I kinda have a feeling because of personnel that there are five this year that are like that. And maybe six because I think Vanderbilt, everybody’s falling asleep on that team, Vanderbilt has nine seniors back. They have their whole team back so you have those guys now in that mix of six that are kinda separated from the pack.”

How good he felt about taking his team to the Final Four last year:

“First of all I kept telling my guys all week I want you to handle this like it’s practice. You play this game like it’s practice. Then all of the sudden it’s game time and we walk up on top of the court which is six foot off the ground. There’s 75,000 people in the building and one of my players nudges me and looks at me and says ‘Coach it’s not practice.’ I knew we were going to have a tough shooting night. Doron Lamb shot the ball and kept us close…Terrance Jones rebounded the ball and kept us close. We had a three point shot, it’s not exactly what I wanted us to shoot but it was a clean look and he thought he was making it. I was happy in that the team had given everything they had and we got better. We lost six road games in our league and came on until the end of the year. That’s also a team that had a 3.16 Grade Point Average, the highest APR in the SEC, and made it to a Final Four.”

Whether or not he thinks he can end the lockout:

“No but here’s what I would tell you, the players gotta sit down  and make sure we’re gonna hold this out, like we’re gonna do this because if you’re gonna give up then give up now. Why wait two more weeks, three more weeks, four more weeks, and lose that money. If you’re gonna cave in then cave in now. If you aren’t then you gotta really come together and say how do we do this? I don’t know all the particulars. I want them to play. I have friends that are coaching in the NBA, guys that got jobs in the NBA, you’ve got every person in those arenas that are doing all that stuff, that’s their jobs. That’s what they do for a living and they’re out. I’ve got four players that were drafted this year and probably five that were drafted last year. Those guys at least have some money in the bank. These other kids don’t.”

Whether or not his players have called him recently for help:

“No, but a bunch of them are here. John Wall’s here, Brandon Knight’s here, Enes (Kanter) was in yesterday, Marcus Camby’s in town, Chucky Hayes was in town, DeAndre Liggins was in town so we have a lot of the guys here and they know they are welcome to work out and some of them are being worked out by our staff but they want to play basketball. They don’t want to be going through all of this. Come on man there’s a big pie let’s cut this up and move on.”

His thoughts on players going on a world tour:

“You gotta do it right and here’s my point though. The guys that they are taking out there to do that that are making the money don’t need the money. So if you’re doing it for the money those aren’t the guys that need the money. If they’re doing it and giving the money to the other guys that need the money then okay, but they don’t need the money. They did an event down here where we had them play the Dominican Republic, the team that I was coaching this summer, and it sold 25,000 tickets. Really it sold 42,000 because it sold like 24,000 here and 17 or 18 thousand in Louisville. If it’s done right and everybody walks away and says it’s great, but here’s the hard thing, you put these events together and guys don’t show. You think you are going to see x,y, and z and three of the four guys aren’t there. The guy you wanted to see is the guy that doesn’t show. When we did it those kids were emotionally tied to us and you knew they were going to be where they were supposed to be but that’s a hard deal. They are not college kids. They are professionals, they are adults, a guy gets hurt he’s not gonna play hurt, and there’s a lot of stuff that goes on with it. I would tell you if they’re doing it for charity which these guys have done, which I think is outstanding, to go around and do this stuff for charity is great stuff. Nothing wrong with that at all.”