After it was all said and done on Sunday evening the Syracuse Orange walked away from Selection Sunday truly wondering who are we playing to start things off? The Indiana State Sycamores? Wasn’t that the team that Larry Bird played on in 1978-79 that made it all the way to the NCAA tournament falling short against Magic Johnson? That is the same Indiana State Sycamore school that Jim Boeheim’s team is taking on out of the Missouri Valley Conference in the East bracket late Friday night. The Sycamores are making their fourth NCAA tournament appearance. For the Syracuse Orange it’s been just another typical year for the powerhouse basketball program making the NCAA tournament with relative ease. The Orange didn’t lose a game until January 17th, finishing the season with a record of 26-7 (12-6 Big East), but finishing 8-7 in their last 15 games including Big East tournament play. 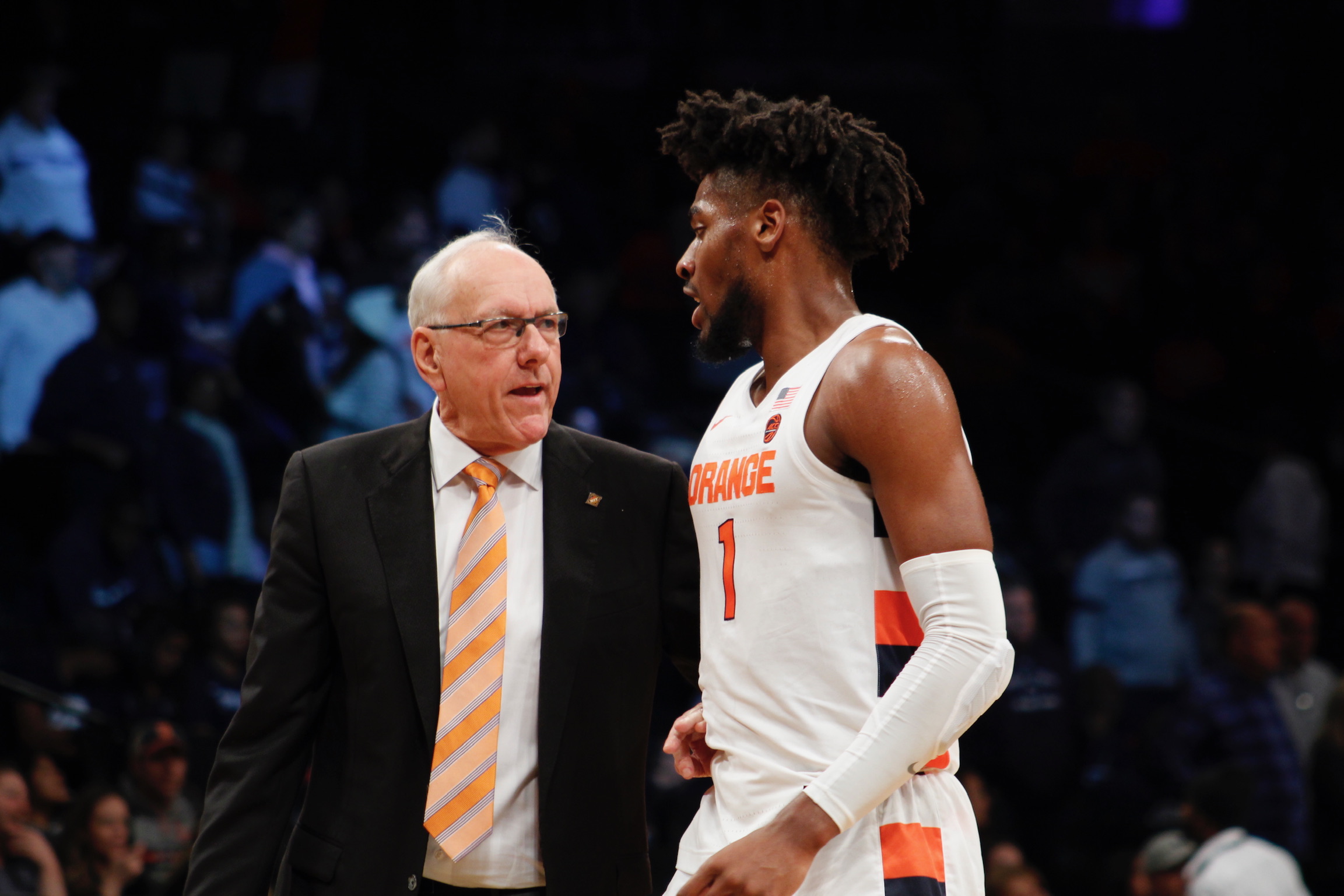 On paper it doesn’t take a rocket scientist to figure out that the Orange just have more talent and height over this Sycamores team that has their tallest player registering in at 6’8” while Syracuse has six players of that height or more. Senior Rick Jackson is a key component to the ‘Cuse defense as he was named Big East Defensive Player of the Year. Freshmen center Fab Melo has come on of late for Syracuse as well. It’s a daunting task for Indiana State, but this is what first round match-ups in March Madness are all about. Jim Boeheim joined the Score 1260 in Syracusewith Brent Axe to discuss his team’s first round opponent in the Indiana State State Sycamores, what kind of measuring stick does the Missouri Valley Conference school bring to his team in the NCAA tournament, is it fair to say that Fab Melo is having a breakout over the past few weeks and did he see this coming all along, is 11 teams enough for the Big East Conference in the NCAA tournament and has he ever filled out an NCAA bracket even though he’s technically not allowed to.

What can you tell us about the Indiana Sycamores?

“Well I’m glad Larry Bird isn’t there, that’s for sure, but they have a very good team. They’re hot. They’ve won seven or eight of their last nine. They won their tournament. They beat Missouri State. A team that’s very, very, good. They’ve got really good balance. They’ve got eight or nine guys that can all contribute. They’re a very solid basketball team. They’ve had success all year long. They beat Northern Iowa. A team we struggled with. They beat them by twenty at home and beat them at Northern Iowa, so that gives you kind of a measuring stick that this is a pretty good team. It’s a tough game, but they’re all tough once you get into the tournament. I think the only team that gets an easy win is the first seeds who are probably going to get an easy first game. Other than that everyone is going to have to play.”

What kind of measuring stick does the Missouri Valley Conference provide to your team coming from a small conference?

“Yeah they’re all good. They’ve had success in the tournament. A lot of smaller conferences have been good, but they haven’t had success in the tournament. The Missouri Valley [conference] has. They’re going to come in with a lot of confidence. I’m sure this is a tough game. You know I think our players realize that. They know these are good teams and tough games ahead of us.”

One guy that seemed to benefit from the Big East tournament was Fab Melo. Is it fair to say that Fab Melo is having a breakthrough or is this something you saw coming over the last few weeks?

“Well in the last few weeks he [Fab Melo] played very well against DePaul. He made some really good plays down in Georgetown when he went back in and obviously played very well against St.John’s. I think he got a little too confident against Connecticut. He tried to make some shots that he’s not ready for yet, but I think he’s practiced well. He’s had a couple of good practices this week. I felt from the beginning it would take the freshmen some time to get there. I think Dion [Waiters] and C.J.[Fair] are playing better. I think it’s unfortunate that the Baye’s [Moussa Keita] hand is hurting so much because he’s really getting better too, but his hands still holds him back. We’re going to go as far as our veterans take us. The key is to how much our young guys can help us. For us to win in the tournament the young guys are going to have to help the veterans. I think they’re ready to do that. We’re very confident they can do that.”

Is 11 teams enough in the NCAA tournament for the Big East Conference? Is that enough teams or do the Big East have more work to do?

“Well I think it always comes down to how you do in the tournament. I mean that’s what people always look at. Not that you got in, but how the teams played in the tournament. We have good teams. We have teams that could go right through to the Final Four. That same team might get to the Final Four could get upset on a last second shot in the second game. You know that’s just the way it is. I mean we came within one free throw of losing to Rutgers. If Ricky Jackson who obviously is not a great free throw shooter misses the free throw with :08 seconds to go in the game against Rutgers we lose you know. I mean that’s the bottom line. That’s how close college basketball is. Anything can happen in this tournament. You could lose to anybody you play and it doesn’t mean they’re better. They’re better that night. That’s all they have to be. I guarantee every team playing this first round except probably, well, probably I mean they think so, but everybody except the teams playing in the top four seeds. Everybody thinks they can win. They probably have a chance to win. That’s just the way college basketball is, so I don’t know how our league is going to do. I know we have a good league. We’ve played outside teams all year and had success, so I know that’s the case, but we just don’t know what’s going to happen in this tournament.”

I know you can’t, but have you wanted to ever fill out a bracket just for fun to see where you stack up with people?

“I use to do it. I haven’t done it…well a little bit at home just with my family, which I hope is still legal. I’m not even sure if that’s legal. We did do it [fill out an NCAA tournament bracket] at home. I can’t remember how I faired. I really don’t, but I use to do it all the time just to see you know what would happen. I’ve gone on television a few times to pick them. I’ve picked the winner a few times, but you know it gets harder-and-harder to pick this thing this year. It’s crazy out there. There’s going to be a lot of upsets in these first two rounds. I’m not sure they’re great upsets, but there’s going to be a lot, a lot, of games that are just going to be very interesting to watch. If I can find truTV on my television you know I’ll be watching them. I don’t think I’ll be doing that [filling out a free NCAA tournament bracket on the Score 1260’s website], but I appreciate it.”