Jerry Jones on Tony Romo’s Game Sunday: “I thought Tony played one of the best games I have ever seen him play”

For three quarters on Sunday night the Cowboys looked like a different team than the one the football world saw last year. Tony Romo was back healthy and looked like he was ready to take the next step at quarterback, their much maligned offensive line was holding up against the mighty Jets defense, they had a running game led by Felix Jones, Rob Ryan’s defense was playing extremely well, and they were avoiding the mistakes that have plagued them recently. The Cowboys had the look of a playoff team as they were about to upset the Jets on their own field. Then everything changed in the fourth quarter. The defense started giving up big plays, there was a blunder on special teams, and Tony Romo was the biggest contributor to a 4th quarter meltdown for the ages. Dallas was just nine minutes away from a huge win, but then Tony Romo did what he has done so many times before. He fizzled in the moment. 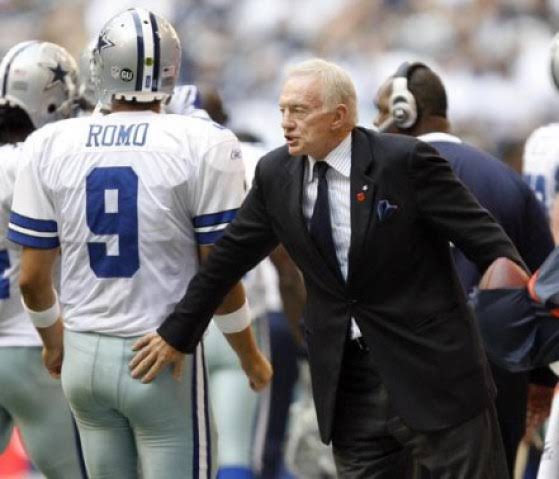 Not only did the mistake prone Romo cough up the ball at the goal-line by diving into heavy traffic, but then he made one of the most ridiculous throws I can remember from a quarterback given the circumstances. In fact I still have no idea what Romo was even looking at. With the game tied and his team facing third down Romo decided to test the best cornerback in the game, Darrelle Revis, and Revis made him pay. Romo’s interception led to the go-ahead field goal by the Jets and the exclamation point on another Cowboys collapse. Tony Romo was sensational for three quarters and he still is a good quarterback, but if Jerry’s team wants to win a Super Bowl, Romo absolutely cannot continue to make boneheaded plays in the most critical moments of the game. Jerry Jones joined 105.3 the Fan in Dallas with Shan Shariff and RJ Choppy to talk about whether or not this was the most crushing regular season loss he has suffered, if he is worried about the collapse carrying over, how he thinks Romo played against the Jets, what he makes of the mistakes Romo made in the 4th quarter, and if he still plans on using Dez Bryant on special teams.

Whether or not this was the most crushing regular season loss he has suffered:

“Well since it’s right now it feels like it. We knew we had a great opportunity to go to New York under the circumstances and have so much visibility and interest in the game, it was an ideal time to win a big, I think I used the term prize. As everyone I thought we had it, but we looked as though at one point there when we were down at the goal-line and looked as if we could put it away. I was so pleased with the way the defense had been playing and adjusting to a lot of challenges out there. We had a lot of really unique and strategic injuries we were having to cope with, but boy did Rob Ryan do a great job and make adjustments with his safeties to compensate for the corners being lost during the game. All of those things had me on a high and it felt like the rug had been pulled out from me and I know it did for thousands of Cowboys fans as well.”

If he is worried about the loss carrying over:

“I’m not. You certainly know you can gain from momentum of winning and you have to come back hard when you’re losing but this team is ready for this. We’ve got relatively speaking a young team with the experience of being a part of players that have good leadership ability. Jason Witten, Jay Ratliff to name two because we just signed them but that’s a big part of why they’re important to our team. All of that will bode well coming back and getting our act back together against San Francisco.”

What he thinks of Tony Romo’s play on Sunday night:

“I thought this may draw a little criticism. I thought Tony played one of the best games I have ever seen him play. You can make a big case that the way he played for three quarters was how we got there at the end and looked like we were for sure going to get the win. He played outstanding, the game has really slowed down for him which is a very good thing, he’s seeing where the ball out to go, all those things bode well for us. He really is a quarterback that has averaged 10 wins for every 16 he has started in the NFL. He’s a winner and we are going to rise and fall based on what Tony Romo is about the next several years and I’m excited about that. We’ve got somebody here where if we can get some other things together we can have a team that gets us in a position to take a shot.”

On Romo’s mistakes in the 4th quarter:
“I think they’re obvious and we’d like to have them back. As you can see when the teams are as competitive as they are that we’re going to play every Sunday in the NFL mistakes can be the difference. Again, like the team, he did some good things out there that probably caused us to have the chance that we had. Again I can’t express enough, and this isn’t to try and give him a pat on the back or make him play any better, I just want everyone to know how much confidence we’ve got in his ability to win ball games for us. He’s one of the two or three best assets that we’ve got to get where we want to go.”

If he still plans on using Dez Bryant as a returner:

“We just have to use him judiciously. I will never forget Deion Sanders. Barry Switzer did not want Deion to return. He said there was just too much risk. I put a highlight reel together of every time Deion had ever touched the ball on kick returns or punt returns throughout both pro and college. He had the highest rate of touchdowns per touch, touching the football, of anyone in the NFL. So we went back, everybody looked at it together and Barry said ‘well we just have to let him return when it’s important to return.’ There was I don’t believe a time in our franchise that I have been here in 22 years that it was any more important to have a big return than it was the other night at that juncture in the ballgame. It’s something Jason thinks about, it’s something we’re very sensitive about. That’s one of the reasons we’ve moved the kickoff up so that we’ll have less returns, that’s where the injuries occur in a high percentage as opposed to the rest of the game so we have to be careful. You might say ‘well wasn’t that early in possibly taking a chance on getting knicked?’ But he’s an all out guy, his body is just contorted by the style he uses when he’s trying to make yards and he can be subject to injury. We’ve got to watch that on the kicking game, but it’s being watched, believe me.”