NEW ORLEANS - NOVEMBER 05: Dwyane Wade #3 and LeBron James #6 of the Miami Heat in action during the game against the New Orleans Hornets at the New Orleans Arena on November 5, 2010 in New Orleans, Louisiana. NOTE TO USER: User expressly acknowledges and agrees that, by downloading and/or using this Photograph, User is consenting to the terms and conditions of the Getty Images License Agreement. (Photo by Chris Graythen/Getty Images)

The unofficial second half of the NBA season is underway and one thing became perfectly clear during the first half: The Miami Heat is the team to beat this season. After their devastating loss in the Finals a year ago, Miami has returned with a vengeance and is playing even better than last season. LeBron James is having one of the greatest seasons by a player in the history of NBA and should be the league’s MVP, Chris Bosh looks more comfortable this season than he did a year ago, and the Heat bench has been bolstered thanks to the additions of Shane Battier and Norris Cole as well as the returns of Mike Miller and Udonis Haslem from injury plagued seasons. Miami has won nine games in a row by double digits and it will take a Herculean effort to stop the South Beach All-Stars from hoisting the Larry O’Brien Trophy this season.Erik Spoelstra joined WQAM in Miami with Joe Rose to talk about whether the criticism and attention is something he expected when the Big Three got together, if the criticism is a motivation for his team, what the team has shown this season that they might not have shown a year ago, whether he thinks LeBron James is the best player in the NBA, and if he has “wow” moments when he watches LeBron play. 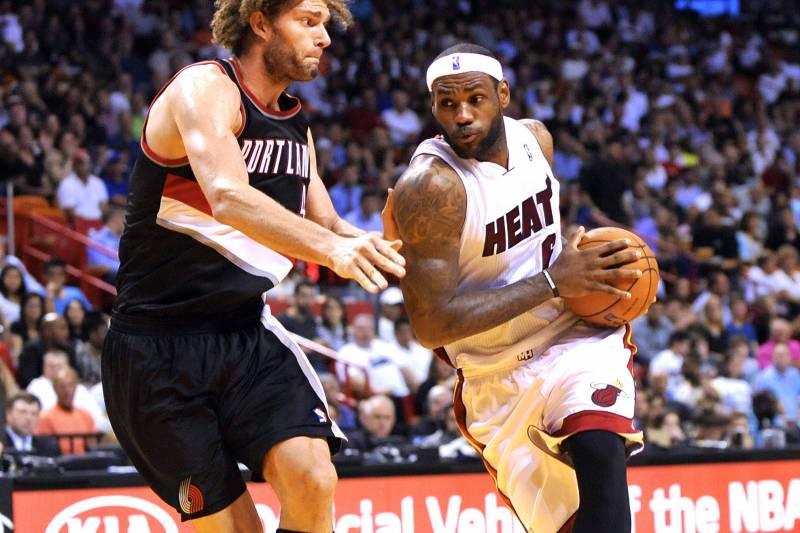 Whether the criticism and attention is something he expected when the Big Three got together:

“Joe, we anticipated that there would be a lot more noise and exaggeration and attention on our team but there was no way to prepare for this. I think it was even more extreme last year but it’s our norm. What happened over All-Star break didn’t ruffle any of our feathers and it was business as usual yesterday. That’s really how we deal with it. Most of what we had to deal with last year was way more exaggerated than anything this year anyway.”

On the criticism being a motivation for the team:

“Yeah no question about it. Last year what we experienced in the Finals was a great motivating factor and it was a long summer for all of us. In terms of us trying to shut everyone up, that’s the natural human condition but our motivation is deeper than that and I think our ability to compartmentalize all of this noise and focus on what really matters and that’s getting better and putting ourselves in the best position possible to make a run at this thing. It’s an unknown future. None of it is guaranteed for any team out there. All you can do is hope you stay healthy and put yourselves in the absolute best position and we’re getting better. Guys are feeling more confident and we hope to be at that point at the end of the season.”

What the team has shown this season that they might not have a year ago:

“More consistency. We have shown for the last year and a half great moments and we talk about all the time that true greatness in all sports in consistency. To be able to do it day in and day out, what you do well and we’re playing much more consistent to our identity on both ends. Being very aggressive defensively which forces turnovers, steals, and opportunities for us to get into the open court. Us being around each other now for all these months guys are getting more comfortable, the ball movement is better, and the trust level is better offensively.”

Whether he thinks LeBron James is the best player in the NBA:

“Yeah I do. I think he’s having a historically good season. If you compare it to any of the all-time greats what he’s doing it’s on par or arguably even better than what anybody has done and we need him to have an MVP season quite frankly to go where we want to go. Of course his head coach is going to say that but he is so unique and dimensional and his consistent greatness is one of his negatives in terms of how he is perceived because you take it for granted. I think the media and people who judge him take it for granted what he’s able to do on both ends of the court. He’s a true two way player. He can lead the league in scoring, but he can also get double digit assists and get everyone involved. He can do it in the post, in transition, on pick and rolls, isolation, and defensively what he is doing for us this year I don’t know if that has really been matched in terms of guarding one through five every single game. We’re playing smaller this year to utilize our speed and we would not be able to do that unless we had his versatility and his mind to deal with all these adjustments.”

Whether he has “wow” moments when watching LeBron James play:

“No Joe, the moments when I have it are when he probably gets the chase down blocks. When he is running from half court and someone is 20 feet ahead of him, you just don’t see that play very often. One you have to have the athleticism, you have to have the timing to do it, but then you have to have the competitive desire to go after it every single possession. Those are spectacular plays and they save possessions and it speaks to his willingness to do whatever it takes to win. Maybe Dennis Rodman, maybe Scottie Pippen, they didn’t shoulder the offensive load he does, but they were versatile defenders that would guard multiple positions, but I don’t know if anybody has defended one through five. He legitimately guards point guards and centers in the same game for us.”