It seemed the Chiefs were cursed in 2011. The defending AFC West champions stood little chance to compete when, at the get-go, they saw three bright young stars go down with torn ACLs. The highest touted player of that batch was Eric Berry, a 22-year-old former No. 5 overall pick coming off a Pro Bowl rookie season. But if there was a positive to takeaway from the early-season run on knee injuries in KC, it’s that they took place early in the season. Berry and teammates Jamaal Charles and Tony Moeaki have over six months of rehab in already, which bodes well for a return to the playoffs in 2012. 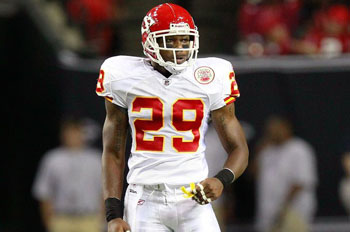 Eric Berry joined The Border Patrol on WHB in Kansas City to provide an update on his rehab and explain how the recuperation process was made easier due to the presence of his also-injured teammates. He also addressed some of the personnel moves the Chiefs have made this offseason and expressed his excitement over Romeo Crennel’s promotion into the head-coaching role.

On how his rehab his coming along:

“Right now I’m doing very good. My knee feels great. I’m actually down in Florida training with my trainer, so everything’s looking good. Been doing a lot of drills, lot of working out, lot of weights. Just trying to make sure I’m ready to go this season. As you know, I got hurt at the beginning of the season so I’ve had a lot of time to sit back and let my body rest and let it heal up. So right now I’m just very anxious to get back on the field. Everything’s looking good, so I’m just gonna continue to work hard and just make sure I’m ready to go come fall.”

On if rehabbing with fellow teammates made the process easier:

“Yeah, I understand what you’re saying. That was probably one of the best things that could’ve happened. It sucks that we all had injuries, but the good thing about it is we were able to push each other through the rehab throughout some of the discomforts of the surgery. And I think that helped us out a lot because we all just competed while we were down there. We always wanted to try to, I guess, set the bar for the next thing we had to do. And I think that’s what made us want to work even harder through our rehab. We all wanted to get out on the field, but at the same time we were just trying to just outdo each other. And I think that helped us throughout the process as well. And it also helps to go through something like that with somebody that you’re close to. So I think that situation was definitely better with those guys who I went through it with.”

On the toughest part of rehabbing the knee:

“Toughest thing about the rehab is right after surgery, the day after, they move your leg. So they get to bending your leg right after surgery. That was one of the toughest things — just not being able to walk around and move about how you want. That was probably the biggest thing, but other than that I can’t really complain about having an injury like that. Because there were a lot of people in there who had been in car wrecks who had to have their legs amputated while we were down there. A guy actually passed away like right after we met him. He was an amputee and he had tendinitis in his other leg that he did have, and he passed away like a week later after we met him. Me and Jamaal (Charles) and Tony (Moeaki) were like really shocked after that. So we were like, shoot, we’re not gonna worry about this ACL, it could always be worse. So we just looked at it as a positive thing and just kept working and trying to get better.”

On if the injury occurred when he was blocked (some say in illegal fashion) by Buffalo’s Stevie Johnson:

“The injury I think actually happened after I got hit. I think I was just so amped for the game and the adrenaline was just so intense I think I didn’t feel it. Because even when I came back in the play after, when I broke, I broke forward. So that’s why I was still able to run around. It didn’t feel quite right, but at the same time I’m the type of guy: ‘Well shoot, it ain’t nothing but a little…’. I couldn’t really feel the pain. … So I’m like, I’m gonna just stay in the game. When I came and broke the play up, I just broke forward (and) I’m like, ‘OK, I’m good.’ But then when I tried to cut laterally, that’s when I realized it was torn. I was trying to jog on my leg after I had my surgery … so going forward wasn’t the problem, it was the cutting that I had a problem with. As far as it being a dirty hit, I’m not really concerned with that — that’s in the past now. If it was me, I wouldn’t have made that block that far away from the play from behind. But some people have their own opinions. So I’m not going to get into whether it was a dirty play or a legal play. I’m not really concerned with that at this point.”

On Stanford Routt joining the Chiefs and Brandon Carr departing:

“I was very excited that Routt was going to be a Chief. Just because seeing what he’s done on the field, and I heard he’s a great guy, I heard he’s a great player. So any time you make an addition to this team like that, that’s a plus. I was very excited for Carr, too, because I think he got the contract he deserves. He’s one of those players that worked hard and did everything right, did everything that the GM and the coaches wanted him to do. So I was very excited for him. I wish he would’ve stayed with the Chiefs. That’s somebody that when I came in he was right there helping me out. So I wished he would’ve stayed here, but that’s just me being selfish. At the same time I’m very excited for him and I wish him the best and I just wanna see all of my teammates do well. I just want them to be with Kansas City.”

On how he feels about Romeo Crennel taking over for Todd Haley at head coach:

“I’m very excited about that, just to see him get the job. You never wanna see a coach leave, that’s something you never wanna see. But at the same time, if they were gonna replace him I’m glad they moved Romeo up to be the head coach. I’m very excited about that. I think they have the right guy for the job. And Coach is gonna hold everybody accountable, and he’s gonna make sure everybody’s doing their job. … We know we have a good coach and we just have to rally behind him and make sure we just play for him.”

On having Peyton Manning in his division:

“It is what it is. Only thing we can do is just prepare for it, make sure that we’re ready and just step up to the plate. I guess that was the best deal for the Denver Broncos to get. But either way, I love a true Volunteer, but at the same time that’s our division. We’ve just gotta step up to the plate and be ready to play.”