Christian Ponder On Justin Smith Sunday Against San Francisco: “He Got Shut Down”

Quietly, the Minnesota Vikings are 2-1 and tied for first place in the NFC North. And although he was a question mark heading into the season, second-year quarterback Christian Ponder has excelled early. Minnesota somehow stopped the red-hot San Francisco 49ers Sunday, as Ponder had what was undoubtedly his best game as a pro. Christian Ponder joined Paul Allen on KFAN in Minneapolis to discuss Bill Musgrave’s offense, shutting down Justin Smith and the 49ers, and the team’s motto, which is boring but seems to be effective. 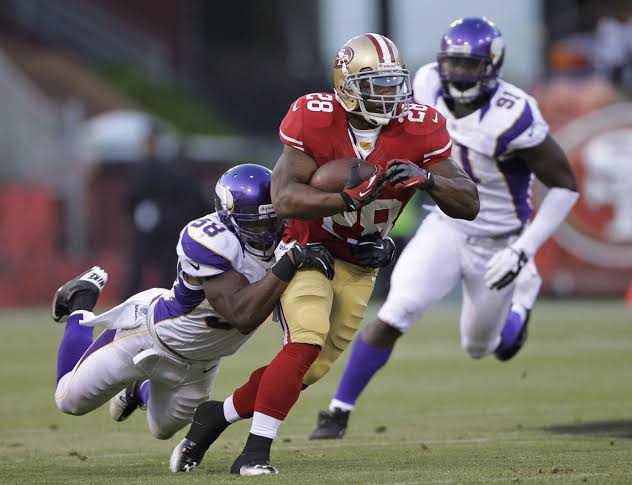 On offensive coordinator Bill Musgrave wanting the offense to be — in Allen’s words — “old-school black-and-blue”:

“Yeah, he does. That’s kind of something we actually talked about. We have the greatest running back in the league in Adrian Peterson and he’s gonna make plays, and we’re gonna keep giving him the ball. We’re running the ball really well right now and a lot of it has to do with our offensive linemen as well. They’re creating holes that are unbelievable when you see them on film, especially against a team like San Francisco, with their front seven. It speaks volumes of how well they’re playing right now.”

On Justin Smith being held in check:

“He got shut down. Charlie Johnson did such a great job. And even seeing Matt Kalil on him sometimes, blocking him. They played extremely well.”

“Our motto has been: We’re going to do the ordinary things extraordinary. We don’t have to be complicated, and we have such great personnel that, for me, my job is just to get the ball to those guys and they’re going to make all the plays. And they make my job so much easier. … And that was our game plan — establish the run and just keep taking what the defense gives us. And that’s what we did.”

Terrell Suggs: 49ers Had Everything ‘Catered’ for Them at Super Bowl XLVII; I Have No Idea What Deer Antler Spray Is