C.J. Wilson lives by the straight edge philosophy and didn’t have a clue the Angels were signing Albert Pujols until he checked twitter

C.J. Wilson is not your average ball player. He may have some unique qualities if that’s what you want to call them. The former Texas Rangers pitcher lives by the “straight edge” philosophy, where he doesn’t partake in drinking or smoking of any kind. Form your own opinion on how strong minded Wilson is regarding a lack of a social life. It all paid off in the end because he’s living out his dream of being in the major leagues right now.As for the left-hander’s free agency experience? From the sound of it he sure didn’t anticipate it to be this nerve-racking, but he ended up back in his hometown. The Los Angeles Angels of Anaheim were the big winners of the off-season, but now it’s time to go out and prove it.C.J. Wilson joined ESPN Los Angeles with Mason & Ireland to discuss the difficulty in leaving the Texas Rangers for the Los Angeles Angels of Anaheim, the straight edge philosophy he follows in his life, how he came across the straight edge philosophy and if he had any indication that the Angels would sign Albert Pujols when he was being courted by Jerry Dipoto. 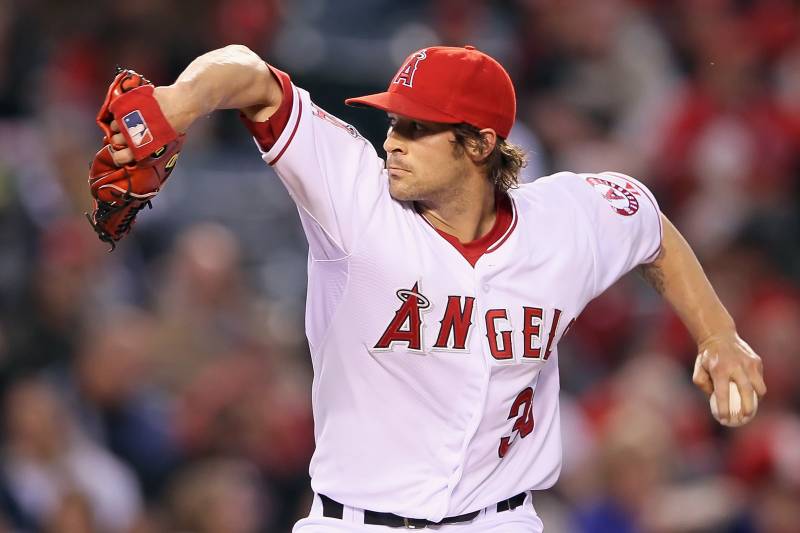 How difficult of a decision was this? Or did you think if the Angels made an offer you were going?

“I have told everybody it was a totally unpredictable process. You have this idea in July and you think okay it is going to shape out like this. Then October rolls around and November rolls around and you realize you have no idea because there are 30 different general managers, who have 30 different ideas about what’s going on. That could be everything from some teams are interested and other teams weren’t interested at all that I was for sure planning on visiting. It’s a very weird process, but in the end I think I made a good decision for the next 5 years at least to be an Angel too and I am really happy about it.”

You adhere to a straight edge philosophy in life. What is that? How would you explain it?

“It’s super simple. I don’t drink and I don’t do drugs. I never have and I never will. The straight edge thing is sort of a vow I guess you take to never drink and never do drugs. It’s very simple.”

How did you come across the straight edge philosophy? Did you adopt it as a kid?

“I saw some stuff as a kid that made me realize my goals of being a major league baseball player were more important to me then social aspects of I guess or the risk of I should say the negative risks of drinking and doing drugs were so high. I saw some really bad results. When I was 12 there was a kid that overdosed in my school and died. I was like eh that kid is not making the major leagues man and he’s dead, so I better not ever do that because making it to the major leagues would be the best thing that ever happened to me, so it was just a focus cause when I was 8 or 9 years old, I knew I wanted to play in the major leagues.”

Now when you were being courted by Jerry Dipoto were you in the know about Albert Pujols or did you find out like the rest of us?

“The rest of us. The rest of us all kind of had the idea that Albert Pujols was going to stay in St.Louis. He’d go to an east coast team or something. I personally found out about the Albert Pujols thing via twitter. Jerry Dipoto was sitting in my agent’s hotel suite and we were sitting their talking to him and he said look I don’t mean to be blunt, but if there is a paper that walks in here I am going to have to divert my attention to that because there is something else going on. I was like what the hell is this guy talking about right now? It is 3 in the morning. Either he has had too many beers or something. We were all kind of loopy at this point. A piece of paper walked in and he signed it and I was like alright. I looked onto twitter and it said: Angels making a play for Wilson and Pujols. I was just like did you sign Albert.

The guy with elbow and the thing. He was like I can’t tell you anything, but what are you reading on twitter? I was like well I am reading you are trying to sign me and Pujols. He’s like it is possible that is the correct rumor, but I can’t confirm it. I was like if I sign this sheet of paper that is front of me right now I want to know what is going on. I signed it and he’s like okay we just got you and Pujols. I didn’t know. I had no idea. Initially they were like we are signing you.That’s what we want to do. We want to take you away from the Rangers. We want you to be a part of the best rotation in baseball and that’s the deal. We are going to win on pitching and we are going to win on defense and we are going to win on the young guys getting better. I was like alright that is good enough for me. Fast forward about a month later or three weeks later, whenever it was and I’m like you got me and Pujols? Alright I am in for sure.”