Bernard Pollard is quite familiar with Peyton Manning, as are his Baltimore Ravens. Pollard has faced Manning plenty, with little team success. In fact, the Ravens have lost nine straight games against Manning. Most recently, Baltimore was beaten handily by the Broncos in Week 15. While Pollard admits he doesn’t think you can totally stop Manning, he insists revenge isn’t on his mind as the two get set to face each other in the divisional playoffs this weekend. Bernard Pollard joined CJ & Kreckman on 102.3 The Ticket in Denver to discuss Ravens football, avoiding complacency, the Denver Broncos, Peyton Manning and the revenge aspect (or lack thereof) that goes with this matchup. 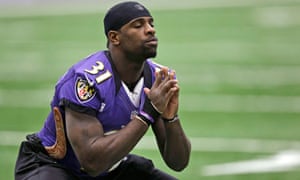 On not getting complacent and needing to play “Raven football”:

“We can’t get complacent, which we did. We got complacent with what we were doing. We practiced our tail off but it just wasn’t showing up on the game day. So I think for us, we have to know and understand the team that we have. We have to go to play Raven football. If we play Raven football, we win. If we don’t, as you guys have seen, we lose four straight.”

On the unique dynamic they have in Baltimore:

“You look at the characters that we have on our team, it’s different from any other locker room in the National Football League. It’s a lot of fun being here.”

On what they’ll prioritize on defense against Denver:

“Week-in and week-out our priority is to stop the run. We did a good job of stopping the run in Week 15. Moreno, I like the way he’s been playing. So many people counted him out and the guy has shown up for the Broncos. He’s been running the ball really tough. We have to allow our front seven to go eat. On the back end, we gotta do everything we can to stop those receivers.”

On how to stop Peyton Manning:

“We have to do everything we can to pressure him. You’re not gonna stop a guy like that. This guy is a Hall of Famer. He’s a very special talent; he’s shown that for 15 years. All we can do is try to contain him. He gets paid a lot of money to throw that ball; that offensive line is blocking their tails off for him. So we have to do our best to try to contain this guy. Like I said, we have to allow our front seven to eat. If they’re eating, then things are going great. If they’re not, this guy can pick you apart.”

On if there’s a revenge factor to this game:

“No, not at all. Our main key is to go out there and to win. We couldn’t care less what happened in Week 15.”