Now that Terrelle Pryor has officially been drafted by the Oakland Raiders during Monday’s Supplemental Draft, we can get back to the argument over whether the NFL can uphold the five-game suspension Roger Goodell imposed on Pryor as a punishment for his transgressions while he was at Ohio State. When Goodell’s decision was made public, fans and the media alike immediate questioned whether the NFL was overstepping its legal bounds with the suspension. 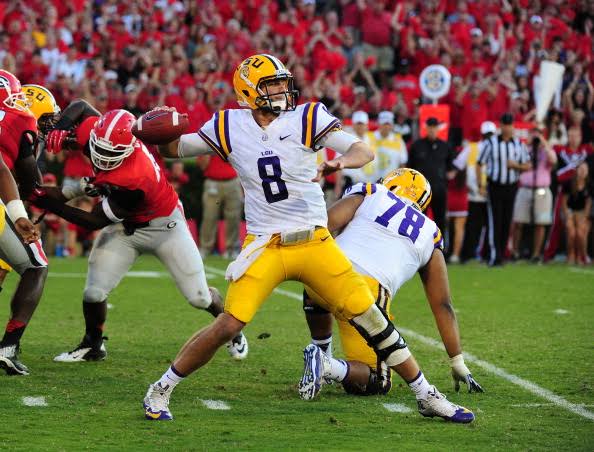 Not Virginia Tech coach Frank Beamer. Beamer is glad the NFL isn’t allowing people to simply walk away from their infractions. In fact, he wishes the league would more frequently force former college athletes and coaches to pay the price for their wrongdoings at the collegiate level, regardless if they were no longer associated with college sports or a particular program.  For instance, Beamer believes the NFL should have taken a similar stance with Pete Carroll when he bolted from turmoil at USC for the Seattle Seahawks.Frank Beamer joined 106.7 The Fan in Washington D.C. with The Junkies to discuss getting over the disappointments of last season for the Hokies program, not having a big-time non-conference game this year, talking to his team about compliance issues in the wake of recent scandals across the country, the NFL upholding Terrelle Pryor’s suspension if and when he joins an active NFL roster, why he believes Roger Goodell and the NFL should have enacted similar penalties with Pete Carroll when he jumped ship from ‘SC to join the Seahawks, rumors about the Hokies potentially being wooed away by the SEC, if it gets harder for him to relate to players as he gets older, and what he’s seeing out of this year’s Virginia Tech squad as the new season rapidly approaches.

On getting over the loss in the bowl game to end last season:

“I think I go back and look at 11 straight that we won there when we started out the season losing our first two. Our kids hung in there and we didn’t point fingers. We got closer as a football team. I’m proud of the ability to come back and win the ACC championship and I thought we made a great statement there.”

What’s the rationale behind a non-conference schedule that doesn’t feature an upper-echelon team this year?:

“During preseason we have what we call educational meetings every day and talk about different things in the program — what you can do and what you can’t do. I think you educate your kids and they know what’s right and wrong and they’re responsible for their actions.”

On the NFL upholding the five-game suspension leveled to Terrelle Pryor at Ohio State:

“I appreciate the NFL working with the colleges to … [take] the general statement, if you’ve done something wrong in college, you can’t take the next step and just walk away from it. I think the NFL’s sending a message and hopefully it will hold up in court and we can have consistency throughout.”

Shouldn’t they do the same thing to coaches then, like Pete Carroll?:

“I agree totally. I don’t think you can just be somewhere and something happened and you can just walk away from it and take the next step.”

On the rumors that the Hokies could be wooed away to the SEC:

“We just feel very fortunate to be a part of the ACC. When they invited us in, that was exactly where Virginia Tech needed to be. I know our fans feel that way. We’re happy exactly where we are.”

As you get older, do you find it harder to relate to players?:

“I don’t believe relationships change. I think what’s important is that they trust you and know you care about them and they can rely on what you tell them. I think that’s still the foundation of coaching a player.”

What’s the overall strength of your team this year?:

“I don’t know that there is an overall strength. I do think our quarterback’s going to be good. I think David Wilson is a special player. Wide receivers probably is are as special as any. … On the offensive line, we’ve got some experience there, guys who have started a lot of ballgames. Hopefully we’re going to see that consistency in our offense. Defensively, we’re just very young, still … but I do think we’re athletic.”