Rashard Mendenhall On Playing Without Maurkice Pouncey “We feel like we can win no matter who’s in.”
by Steven Cuce

The Pittsburgh Steelers pride themselves on being a blue-collar town as their football team reflects that culture. Pittsburgh has always been a hard-nosed football team that loves to pound the football at opposing defenses while their defense controls the pace of the game with hard hitting. Looking back at the Steelers’ six Lombardi trophies each team has a common theme that includes a dominant defense along with an elite running back and quarterback. The “Steel Curtain” defense lead Pittsburgh during the 1970′s Super Bowl dynasty run [74,75,78,79] with Terry Bradshaw at the helm along with elite running back Franco Harris. Pittsburgh was led by another dominant defense in the latter part of the 2000′s [05,08] with a young quarterback in Ben Roethlisberger under center along with potential Hall of Fame running back Jerome Bettis. 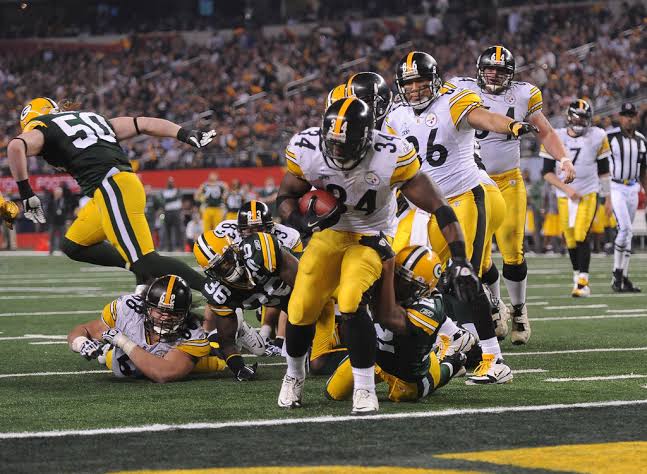 Willie Parker was the running back on the 2008 Super Bowl Championship team, but there seems to be a common theme. Going into Super Bowl XLV the Steelers are lead by the defense once again, but a new face has emerged at running back. That new face is Rashard Mendenhall. The former University of Illinois standout has come onto the scene this year as a premiere running back of the NFL. In the 2010-11 season, Mendenhall has racked up 1,273 yards along with 13 touchdowns. Mendenhall will look to add his name to Pittsburgh Steelers Super Bowl history this Sunday in Dallas. Rashard Mendenhall joined ESPN Chicago with the Afternoon Saloon to discuss what is the key ingredient in having a great running attack against a superb defense in the Green Bay Packers, what’s the difference without Maurkice Pouncey, how excited is he for the Super Bowl and does he think experience plays a big factor for the Pittsburgh Steelers going into Super Bowl Sunday.

What’s the recipe or key ingredient to having a great run game against another phenomenal defense in the Green Bay Packers?

“I think as always it’s ugh… to control the line of scrimmage. The offensive line did a great job with that against the Jets [New York]. You know they were on their guys. They got movement. As a running back you love that.”

Maurkice Pouncey is one of the most dominant centers in the NFL. What’s the difference without him if he can’t play?

“I think it’s tough when you lose a playmaker like Pouncey and all the things he does. He [Pouncey] can get to any level of the defense and block. He [Pouncey] springs so many big plays, but at the same time you know we played the whole AFC Championship almost without him and we were able to be successful, so ugh we feel like we can win no matter who’s in. We’ve had to play games without Ben [Roethlisberger]. We’ve had to play games without Troy [Polamalu]. You know I mean Pouncey that hurts, but we feel like we can win it as a team.”

How excited are you for the Super Bowl? Can you control the excitement?

“No for us you know umm… there’s a lot of work that has to be done until that point [Super Bowl Sunday], so we don’t get too excited about the game as much as every day you have to get better to prepare for that game. If you’ve been excited all week come Sunday you don’t know the game plan. That’s not a good feeling. For us, we take it a day at a time. One practice at a time. One drill at a time.”

Do you think experience plays a factor and benefits the Pittsburgh Steelers in Super Bowl XLV?

“I believe it does. When you’re going through this process you know these older guys have been through it. They don’t really ride the wave of emotions with everything going on. There’s not too many ups-and-downs. I think it helps us in our preparation, but at the same time just on game day I mean you gotta play. You still gotta run, catch, block and tackle.”