John Fox, the longtime coach of the Carolina Panthers, is the man responsible for turning around a Denver Broncos organization that has fallen on particularly hard times this past several years. After a 6-0 start to the Josh McDaniels era a year ago, the Broncos proceeded to fall apart and miss the playoffs in ’09. Rather than building on the modicum of momentum they had established as an organization in ’09, McDaniels proceeded to make a number of unfathomable personnel moves that played a part in Denver winning just four games and taking several huge steps back during the ’10 season.  Fox has been no stranger to tough times himself in recent years. His Panthers teams have been a big disappointment the past two seasons, missing the playoffs both years following their early exit in the ’08 playoffs as the No. 2 seed in the NFC. But Fox is widely regarded as one of the more solid and capable head coaches in the NFL, regardless of a few bad years on his resume. There will be plenty of support for him in Denver– both financially, organizationally, and from the ubiquitous Broncos fanbase. But given the state that McDaniels left the roster in, Fox will sure have his work cut out for him turning around one of the league’s more prominent and once-proud franchises.Fox joined 104.3 The Fan in Denver to talk about what he can share about how the process of hiring assistant coaches is going, what excites him about the immediate future of the Broncos organization, his thoughts on Tim Tebow’s future as an NFL quarterback, what importance he places on bringing back fan-favorite Champ Bailey, whether or not the Broncos will continue to play a 3-4 defense or revert back to a 4-3 which he coached in Carolina, how he plans to go about making personnel decisions, and how there are admittedly facets of the Broncos team and roster that he thinks needs an immediate overhaul. 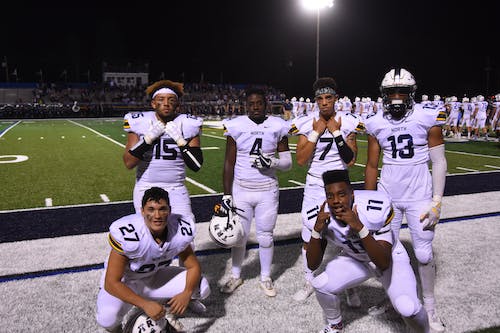 On what information he can share about how the search is going for assistant coaches:

“Well I think what we’ll do is when we get it all finalized we’ll make the announcement at the appropriate time, but I think Bronco fans will be excited. We’re getting closer, but we’ve got a few more spots to finalize, and I don’t know if I can let that out at this point.”

On what excites him about the immediate future of the Broncos organization:

“Well I think right now you look at the top. Being a head coach for nine years, being at league meetings, being pretty involved in league movements what they’re doing from a familiar stand point, I think Mr. Bowlen has done as good a job as anybody in the National Football League. You look at the success, the number of wins, the sell outs, you talk about wins as far as Super Bowls, divisions, championships — I think there’s a great tradition in this organization. Now, I think the addition of John Elway who I knew more as a player competing against him, but in my meetings with him, I tell you, he brings great energy. And that’s what we’re trying to do — infuse the energy back into this building, back into the Denver community, and obviously the way to do that is win.”

On what importance he places on bringing back Champ Bailey:

“Well I know Champ Bailey is a great player, again competing, watching him, I had him in the Pro Bowl.  He’s a great individual. He’s done a lot for this community, and there’s no doubt he’ll be a priority. I think right now with the fluidity of our whole league, I don’t think anything is going to happen overnight, but it will definitely be something that is a priority.”

On his take on Tim Tebow on his future as an NFL quarterback:

“Well I think if you look through the history of the National Football League and all the great quarterbacks, I think No. 1 you have to be a great leader. You stand in that huddle, lots of time in pressure situations, you’ve got to lead ten guys. And with that comes the rest of the football team. The quarterback and head coach are prime figures on any football team — you get more credit than you deserve when you win, and more blame when you lose. So number one I think Tim Tebow is a leader. I think he’s infectious. You talk about being a pilot not a passenger. I mean, he’s a leader and he brings people around him with him. So number one, I think that’s a critical part of the quarterback position. I think he was at a little bit of a disadvantage in that he played in a spread offense in college football. It’s not his fault. Obviously he had great success in college at the University of Florida. That takes awhile to learn, it looks like it’s simple — take a snap under center, drop back, have the timing, have the rhythm, the mechanics to throw the ball accurately takes some practice. He knows that, everybody here knows that, the coaching staff prior, and our coaching staff coming in. It’s going to take a lot of work, but he’s not afraid of hard work.”

Whther he plans to stick with the 3-4 defense the Broncos have been playing in recent years or revert back to the 4-3 which he’s been coaching in Carolina:

“Well what I really think is part of coaching is putting players into best position to utilize their abilities. Whether that’s 3-4 or 4-3, typically people are sliding one under or sliding one over on defense, and whether you originate out of the 3-4 or the 4-3, I don’t think that’s our big issue right now. Looking at the talent, and I have looked at it, I haven’t studied it as much as I will moving forward and our staff will moving forward, but philosophically it’s simple — you take the ball away. We need to do that better as far as takeaways, we need to do that better on downs, and what makes that better is having great players. So we’ll look to improve in every area that we can in that department. There’s no question the defense will get a lot of attention as far as infusing new talent, and that’s basically what we’re going to try to do.”

On how he and the front office plans to go about making personnel decisions, something that was a point of contention during the Josh McDaniels era:

“Well I think moving forward, and something I’m very familiar with and the powers to be here are all on board with, is that it will be done by committee. It will be done by more than one person. This will not be a dictatorship, everybody will go through the process, everybody will have a voice but not necessarily the final say. So when things are unanimous, you’ve got more eyes. You know, twelve eyes are better than two eyes in the evaluation process. And when you reach a decision, that’s what you do. So I don’t think there’s a lot of egos here, we’re just going to try to make the best possible decisions we can on acquiring the best human talent that we can. So that’s going to be important. Whether it’s the football team being arm-in-arm together, or the management and decision makers, that’s the plan.”

On if there’s an area on the Broncos team that he feels just absolutely must be corrected immediately:

“Well I think being real honest with you, yes. When you evaluate it, sometimes that end product isn’t exactly how you planned it either. So I’m not being critical of anybody other than we’ve got a lot of work to do, and I’d rather understate and overproduce. I feel confident that I’ve actually had the opportunity to do this before. So I’m excited, and I feel good about it.”