If you’re like me, you knew who Keegan Bradley was before the PGA Championship began last week. That said, you’d have to be a pretty big golf fan to know that he was an up-and-coming rookie who won the Byron Nelson Championship earlier this year. And regardless, even while watching him play Thursday and Friday, it was tough to imagine a player winning a major the first time he ever played in one. That’s exactly what happened Sunday when Bradley shook off a triple bogey on No. 15, nearly erasing it with back-to-back pars on 16 and 17. His effort, and Jason Dufner’s trouble down the stretch, forced a three-hole playoff between the two. Bradley built on his momentum, capping off an unthinkable week by winning the PGA. Keegan Bradley joined 790 The Zone in Atlanta with Mayhem in the AM to discuss his feeling after making triple bogey on 15, his impressive shots down the stretch, his nothing-to-lose mentality, his long birdie putt on 17, being an unknown to most of the general public, how the playoff unfolded, how he’ll handle life going forward, Phil Mickelson being a mentor and what he did the night before and after the big victory. 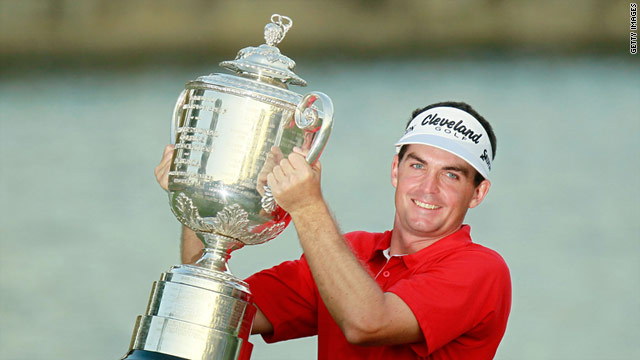 After you made triple bogey on 15 to fall five shots back, what were you thinking?:

“I just kept telling myself I didn’t want to have that moment define me for the tournament. I had played too well. It’s a 105-yard walk back to the 16th tee and all I kept telling myself, ‘All you’ve got to do here is hit this fairway.’ The worst thing you can do is try to make five birdies on one hole. … I hit the best drive of the week on that hole, hitting it right down the middle and then I made birdie on the hole.”

Between that drive and then the long birdie putt on 17, does it get any better than that?:

“It’s something you dream about as a little kid. It’s a hard feeling to describe. It was unbelievable and to have the crowd cheer for me and be behind me like they were made it extra special.”

When you were walking to the 16th tee, did you basically take the mentality that you had nothing to lose at that point?:

“That’s exactly what I was thinking. I had nothing to lose at that point. I didn’t know at the time I was down five. I was trying not to look at any leaderboards. The problem with that there was people in the gallery screaming to me where I stood. … It just happened to be my day.”

What did you know about that putt on 17 and how did it play out?:

“I hit that putt a bunch of times in the practice round. I knew that it was going to be semi-straight over that hill. At the very last minute, I made one minor adjustment to the left. I hit that putt and I moved over and I had a straight-in shot of the ball in the hole. Sure enough, that thing went in dead-center. It was a feeling like a shot of adrenaline running through me. I let some emotion come out of me and it’s a moment I’ll never forget.”

On the people who are saying, ‘Who in the world is Keegan Bradley?:’

“It’s fine with me. I’ve kind of been under the radar my whole career. It’s fine; everybody’s got to go through the process of playing in the mini-tours, the Nationwide and the rookie year on the PGA Tour. I’m just beside myself with some of the things that have happened this year.”

After he put his approach shot close on the first playoff hole, you put your shot closer than his. What was that like?:

“It was a pretty remarkable moment. … When me and Jason walked up onto the green, they gave us a big ovation and then everyone started to chant, ‘U.S.A.’ It was a moment that gave me goosebumps when I was on the green. That shot and that moment is something that will be remembered for me.”

Could you see that his body language had turned negative as you were playing against him?:

“That’s kind of how Jason is. He’s a very calm guy. But I just had a lot of momentum going my way with the way that I finished and I got off to that good start on 16. To be honest with you, he didn’t hit a bad shot in that playoff. Every shot he hit was really good. He should be very proud of the way he played.”

How do you handle the life-changing situation that’s in front of you?:

“I’m lucky enough to have great people around me to help me through this process. I’m not worried one bit. I’ve got people that I trust. It’s going to be a time that I’m going to try to enjoy as much as I can. It’s a little crazy right now, but it’s going to be a fun couple weeks.”

On the players that have helped him along the way:

“Phil Mickelson has been really, really great to me over the years. He helped me through this win and he was one of the first people to text me last night. It’s remarkable to be able to call him a friend and somebody that I look up to.”

“Saturday night I had my mom in town. She made me pasta, chicken parmesan. I played with my nephew and watched ‘Everybody Loves Raymond’ all night. … It was my first home-cooked meal in probably six months. All that factors into a relaxed atmosphere and it was part of the reason I won. … [Sunday] everybody thinks it’s some crazy night. I went home and we kind of stared at the trophy all night. … I had cereal and peanut butter and jelly for dinner. We just kind of sat around and stared at that trophy and sometimes touched it to make sure it was real.”