About six months ago, Brock Lesnar was at the top of the fight game and looked unbeatable in the UFC heavyweight division.  He was dominating the competition and people began to ask “who in the UFC can step up and challenge Brock Lesnar?”  The answer finally came but not in the form of a fighter.  For the past couple of months, Lesnar faced the toughest opponent of his life outside of the octagon.  Brock was diagnosed with a disease known as diverticulitis and had to fight just to stay alive.  Now, he is back healthy and training and looks to return to the octagon in July where he’s scheduled to fight the winner of the Shane Carwin-Frank Mir fight.  While Carwin was the opponent that he was scheduled to fight in November before battling for his life, the guy that everyone wants to see him fight and the guy that Lesnar wants is Frank Mir.  Despite beating Mir down the last time they fought, Mir continues to run his mouth and Lesnar would love nothing more than to once again get in the octagon and try to shut Mir up once and for all. Brock Lesnar joined KFAN in Minnesota with the Power Trip to talk about the illness that he suffered from, how he is feeling now, when he expects to be back in the octagon, and whether or not he would liek to fight Frank Mir once again. 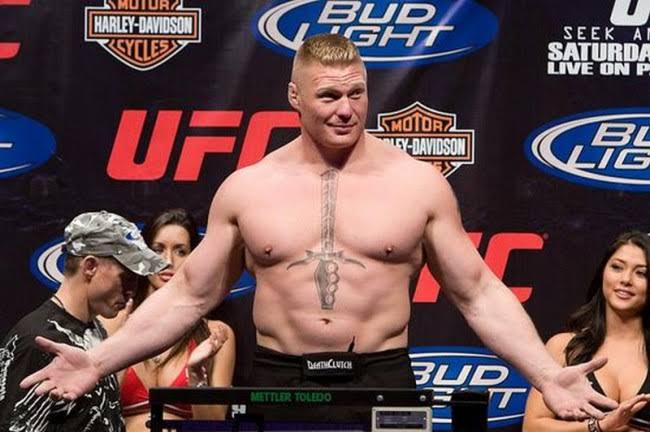 On how his health is right now:

“Yeah. I feel really good. I’m back to training, I started minicamp last week, and I feel great. Everything is on track. Starting to build the base up again and get ready to fight hopefully mid-summer. We’re thinking about July 3rd in Las Vegas right now and fighting hopefully the winner of Frank Mir and Shane Carwin. If one of those guys is unable to fight after that fight I’d probably fight Cain Velasquez. To my understanding, I’d really like to fight Frank Mir again.”

On what he makes of the comments made by Frank Mir about wanting to kill him in the Octagon:

“(Laughing) I don’t know what he’s doing.  He’s still probably trying to pull his foot out of his mouth.  When you say something like that and your wife has to go out and apologize for you, you know you’ve pissed somebody off.  I think his wife made the apology before he did probably.  In this sport of fighting, and fighting has come so far in such a short amount of time, we want to perceive ourselves as athletes and get the respect of the general public.  It was out of line, but in a fighters mentality I don’t want to go into the Octagon and kill somebody but I do wanna do whatever I can to win.  Maybe that’s what he was saying, I don’t know.  The guy should focus on the task in front of him which is Shane Carwin because if Shane Carwin beats his ass he won’t be fighting me.”

On how he reacted when he first heard the comments:

“With the internet nowadays there’s all kinds of stuff on there about people saying something.  It took me awhile to actually figure out.  I had to hear it from his mouth, but we’ll get past this.  Hopefully he gets past Shane Carwin so I can put another beat down on him.  For a guy to take an ass whooping like the one I gave him, for him to get up and keep running his mouth, I just gotta laugh at it.  I gotta go back to a quote that he said before my second fight.  He said if Brock Lesnar beats me, he will be the best martial artist ever.  I guess he’s eating his words and he doesn’t want to admit that I’m that much better than him.  I am truly hoping that Frank wins this fight so it sets us up for July and maybe the next beat down will…I don’t know what I’ll have to do to shut him up.”

On the ability to avoid surgery:

“To me it’s a miracle that I can avoid this surgery.  When the doctors went in there and checked everything out, they said ‘I don’t see any reason to go in there and remove any of your colon.’  To go from the extreme to where I had to have it done to a month and a half later to well they don’t want to do it was a blessing.  I got a gift from God there and I’m gonna take that and I’m gonna run with it.  I’m gonna do the right things, get back in the gym, be smart, and train hard for my next opponent.  I feel like I’ve been given a second chance.”

On the emergence of Cain Velasquez:

“I think it’s great.  Finally there’s a heavyweight division that people are talking about.  It’s not just talk about Brock Lesnar or the Randy Couture’s.  It’s always good to have a melting pot of heavyweights that are capable of challenging the champions.  I think it’s good.  Cain has proven himself, he’s beaten some guys with credibility and I wouldn’t have a problem stepping in the octagon with him.  He’s a former wrestler from ASU, former Division 1 All-American with some good hands.  So he’s definitely a force to be reckoned with.”