Brian Westbrook has meant so much to the Philadelphia Eagles organization for the last five years or so.As a small back coming out of Villanova people doubted his skills and size and never thought he would have as much success as he has enjoyed so far in his career. After surpassing 1,000 all-purpose yards every year since 2004, this past season was a challenge to him. In late October, he was knocked unconscious and later it was determined he had a concussion. Westbrook sat out the next three weeks then returned to play and received his second concussion in twenty days. His second concussion served as an awakening to the potential long-term brain damage that can occur from multiple, severe blows to the head. Some thought that he would retire despite being in the prime of his career but he was able to fight off his fears and come back to play in the playoffs. His injury made the team have to rely on rookie running back, LeSean McCoy and Leonard Weaver to take the bulk of the carries this season and they did a good job in doing so. If Westbrook returns to his old form and McCoy continues to improve as a player the Eagles could have the most versatile running back duo in the NFL and could be competing for yet another NFC East division title. Brian Westbrook joined WGFX in Nashville with former teammate Blaine Bishop to talk about whether Donovan McNabb will be the quarterback next season, how much fun it is to play with Donovan McNabb, and what he learned about concussions this past season. 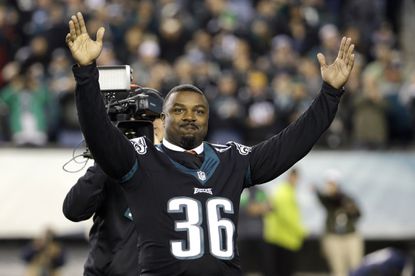 Whether Donovan McNabb will be the quarterback next season:

“I think there is no question in my mind if Donovan will be back. After what he was able to do last year which he had a very good year of course. Everybody measures, a lot of fans measure by Super Bowls. Did you win the Super Bowl and you know? Realistically there is only going to be one team out of thirty-two to win the Super Bowl every year and it is hard to do that. I don’t think that you can measure whether a quarterback can be successful or not whether he was a Super Bowl or not. If you look at this football team with Donovan and without Donovan I think you would be hard-pressed to say that there was better quarterback in the league than Donovan McNabb for Philadelphia Eagles.”

How much fun it is to play with Donovan McNabb:

“A whole lot. Donovan he brings that added layer, added attractiveness to the game that he could take a play that is not doing nothing and turning it into something. As a player you are always ready for that and you are always willing to want a quarterback that can do that because it changes everything. It changes your whole game plan. It changes everything around. It changes defenses that you actually face. As a teammate of his and a player that has seen him doing so many great things on the football field it would be hard-pressed for me to find somebody better than Donovan McNabb to play quarterback for us.”

Whether he felt that he would be this successful coming out of Villanova and into the NFL:

“Well you know Blaine I definitely appreciate you saying that. I know that when you came there you came with that reputation being a big-hitter, big playmaker so I don’t know who was scared of who… Going against that first team being with the second or third team it was definitely worrisome to be in the backfield. For me I wanted to be successful and unfortunately because I first came into the league so many people told me that you won’t do anything but be on special teams and maybe be a third down back. They didn’t see the vision that I had. I had it in my mind that I was going to go out and help the team win no matter what and I wanted to prove these people wrong and do everything that I could to make this team be successful and be helpful to that football team. As the play reps, I am not sure at that point how successful that I was going to be but I was going to give every ounce of energy that I had to working hard to staying in that playbook and doing everything that I could to get onto that football field and to help the team because I did that I was able to have a lot of success.”

What he learned about concussions this past season:

“Well yeah I think a lot of people just don’t have the knowledge. You don’t think about it unless you had one. Unless you get one so they just don’t understand that if you continue to play with a concussion you run the risk of all different brain diseases to an early-on type of Alzheimer’s to early type of dementia and to forgetting things. As we all get older we tend to forget some things sometimes anyway but it gets worse and so forth and quite possibly death on some situations. A lot of people just do not know it, a lot of young kids. I didn’t even know before I even had my concussions all the repercussions of getting concussions. As a player you are always taught get back in there and play. Get back in there and play but the truth is, once I found out that, if you get back in there and play with a concussion even though if you want to play and you are feeling fine that you run the risk of really hurting yourself. I had a concussion October 25th. I think it was a Monday night game and I got knocked out and I was laid on the field, asleep on the football field. At that point I woke up and it was very clear I knew what was going on. I knew my surroundings. I knew everything. I had a slight headache. The next couple of days I found out that I had a concussion, a worse concussion than I had previously had thought.

At that point you are trying to find out when is the best time to get back into the game. You have to of course wait until you all of your symptoms are gone. All of your headaches are gone when you are resting. All of the headaches are gone when you are having activity. They call it, with exertion… Then you have to pass a test that is called an impact test which you take on the computer. It tests your reaction time. It tests memories and things like that with shapes and words. Once you are able to pass all of those tests then you have the opportunity to go back out there and play. The truth is, I waited three weeks. I passed all of the tests. I waited three weeks to get back out there and after passing all of the tests waiting at the time, just like you said before Blaine, you have a normal hit that kind of just glances off of you or you don’t really feel it all that much that had a normal, average NFL hit, not a great big collision or anything like that and the concussion came right back. What happened to me was that I was not completely healed from the first concussion. Even though I waited that long amount of time and passed all the tests I still wasn’t completely healed from the first concussion and it came back just like that. After that I had to sit out another five or six weeks just for me to be completely sure that I was 100% OK.

These concussions are very serious man. I don’t think a lot of people are taking them as serious as they should be because really it is a life or death thing. I know that Blaine, you have been out of the league for a few years now that you feel the impact and result of some of the collisions that you had. Some of the injuries that you had at that point. I think that as a player you understand that maybe as a I get older I might not be able to walk as good. I might not be able to play around as much with my kids, but at the same time as you go into the league you still think that you are going to have at least the mental capacity to be able to play with your kids. At least to talk to and have a conversation and remember things and the one thing that people have to know about concussions that if you continue to play with a concussion and you continue to play without being completely healed then you run the risk of not being able to do that. Not being able to walk and talk and communicate and remember and of course early onset of Alzheimer’s like I mentioned early as well as dementia. I don’t think any player that is going into the NFL and believes that is a realistic risk and it really is if you continue to play with concussions.