Brad Stevens has emerged as the nation’s top young basketball coach.  He has elevated Butler to an elite status only rivaled by the likes of Kentucky, Kansas, UCLA, Duke, UNLV, Florida and a small handful of others.  Going to back-to-back Final Fours is extremely difficult for any school or program and is an accomplishment unheard of for a so-called mid-major program.  It’s usually only done by top national programs that recruit the “best” players in the country, but Stevens does an excellent job plucking under-the-radar recruits and helping them develop into players capable of blossoming on a national stage. You can guarantee Coach Stevens will have Butler as prepared as ever against Virginia Commonwealth with a return trip to the national title game on the line.  VCU, another Cinderella story of its own, has stolen some of Butler’s thunder with four of its five NCAA tournament wins coming by double digits, but I think this Butler team is better because of the invaluable experience it gained last year.  Brad does an incredible job teaching his players the little things, which they consistently do and continue to win, and I wouldn’t be surprised if Butler is the last team standing.  Brad Stevens has the opportunity to become the second-youngest coach to win a national championship, but he figured out early in his career that he must continue to learn. Brad Stevens joined Dan Patrick to talk about how Butler is going to defend the three-point shot against VCU, if he gets scared watching VCU on film, whether their experience from last year’s Final Four will benefit his team in any way, and Butler will beat VCU if… 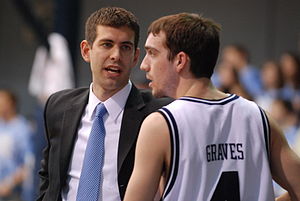 How Butler is going to defend the three-point shot against VCU:

“So, all you have to do is stop them from shooting threes?  Easier said than done.  I think one of the things you are talking about is you better guard them with a huge sense of urgency because they are rolling like maybe no other team I can remember in the NCAA Tournament, probably rolling as much as North Carolina was two years ago when they won it.”

If he gets scared watching a team as good as VCU on film:

“First and foremost you look at them with a lot of respect and a lot of passion for the game of basketball.  I like seeing basketball played in a way in which teams move the basketball, they share it, they play together, they care about one thing, they try to make each other better, that is what you see with the VCU team, it is just a fun, fun group to watch.  So first and foremost you respect it and you admire it.  Yeah it certainly gets your attention with the way they are rolling, they are shooting 45% from three in the NCAA Tournament, a remarkable, remarkable statistic, and I think it is because they are not only great shooters but they have drawn such great energy from their play on both ends of the floor.”

Whether their experience from last year’s Final Four will benefit his team in any way:

“Well I think where it helps is in your week of preparation, you know I have been able to close my door and watch film.  I have been able to spend time with my family when I have a minute, you know, assistants same way.  Our guys have been able to manage the media requests and everything else in such a way that they are still students first, and that is a hard thing to do.  You have already missed  a bunch of classes in a row in the last three weeks and the thing that kind of gets lost in the shuffle is how hard it is to catch up as a student-athlete when you miss this kind of class.  So my biggest thing for this week was to have a sense of normalcy, but really, really get caught up in everything you are doing before we left for Houston and then hopefully we come prepared and play well.” Butler will beat VCU if. “We win possessions.  I know it sounds simple but it is a major possession game.   I think you talk about things like turnover margin, you talk about things like rebound margin, the team that maximizes each possession at this level and magnitude wins.”