The most coveted defensive free agent this off-season was defensive end, Julius Peppers.  It didn’t take the Chicago Bears a long time to pull the trigger on Peppers as they signed him to a six-year $91.5 million contract just minutes into the free agency period.  The addition of Peppers will generate a much needed pass rush from the defensive line without the help of blitzing linebackers and defensive backs to get pressure on the quarterback.  Although it was a good signing for the Bears, they failed to address the ongoing issue of having no production from their wide receiving corp. 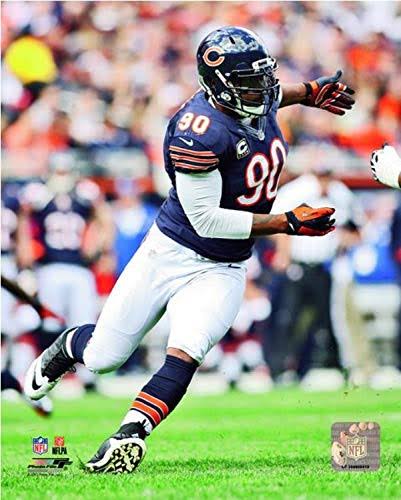 From what I can remember, it has been the offense that has plagued them for quite some time, not their defense.  Sure they have some talent at wide receiver with Devin Hester, Earl Bennett and Johnny Knox and maybe Devin Aromashodu can validate last season with a solid 2010 campaign, but Jay Cutler needs some toys to play with.  These wide receivers aren’t exactly household names.  You don’t have to have household names to be successful, but when you trade for a franchise quarterback and fail to give him proven weapons some begin to question the thought process of the front office.  In my opinion, they paid Peppers way too much money to get him in Chicago.  With a head coach that is fighting for his job, I guess you have to take a few gambles here and there and hope they pay off.  If this one backfires on him, you can bet Lovie Smith will be looking for a job this time next season.Julius Peppers joined ESPN Radio in Chicago to talk about whether he chose to sign with Chicago because they made the best offer or whether there was something that attracted him there, who he is most about excited playing with, and whether people mistake his calm demeanor on the field for taking plays off.

What it was like partying in Chicago the night he signed the contract:

“It was cool.  We had a great time.  We was just out celebrating a good moment.  It is not a normal thing, but for that night we just had a little fun with it.”

Whether he chose to sign with Chicago because they made the best offer or whether there was something that attracted him there:

“It was about a couple of different things.  It was about the team.  It wasn’t about the best offer.  It was about the team that was poised to make a leap in the league. Chicago fit that criteria…  Also the players that they had in place and the culture.  I saw a chance to play for Lovie who is a defensive minded coach similar to where I am coming from.  Also Coach Marinelli is one of the best if not the best defensive line coaches in the league so all of those things combined made it attractive to come here and sign here.”

Who he is most about excited playing with:

What he liked about Lovie Smith and their conversation before signing with the team:

Whether people mistake his calm demeanor on the field for taking plays off:

“Yeah I have heard that a million times and I think that is true.  That is correct.  That is a fair assumption to make, a fair statement to make.  People do mistake that sometimes ,but that is just a part of my personality that it’s not going to change.  It’s not going to change.  Whether you mistake it for a lack of motivation or not playing hard or anything like that.  That is just who I am as a person…  Sometimes in your career people have to nitpick at silly things because there is nothing else to say.  You can’t say that there is a lack of production.  You can’t say anything else really but lack of motivation.  That is the thing that people are going to try to nitpick at.”

Whether he has a preference on the side he plays and whether he has spoken to any of the coaches about where they plan on playing him:

“We haven’t really talked about the schemes yet as far as left or right.  I am comfortable on both sides.  I am just here to do whatever I am asked to do and if it is right side it is right side.  If it is left it is left.  I don’t have a preference.  Whatever is going to help this defense be successful and whatever I am asked to do, that is what I am looking forward to doing.”