For such a big and ugly man, New England Patriots nose tackle Vince Wilfork is sure one well-spoken man. Sounds just like a coach if you ask me, an extension of his sagacious boss, Bill Belichick. The Patriots are of course rolling, their most recent triumph coming in the snow at Soldier Field against the previously surging Chicago Bears. Tom Brady and the offense are grabbing the headlines, but it’s Wilfork and the collective play of the defense that are quietly propelling the team to lopsided victories.Wilfork joined WEEI in Boston to talk about how he enjoys playing in the snow, how Bill Belichick emphasizes focusing on the opponent not the conditions, his early-season prediction about how good the defense could be starting to come true, and how Belichick’s coaching style allows the team to plug in guys when necessary without the team losing a beat. 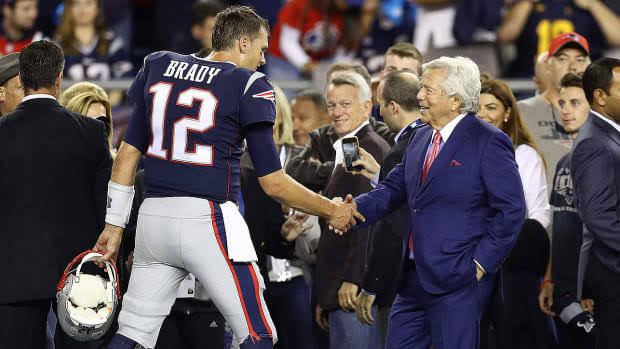 On if he and most other big guys enjoy playing in the snow:

“I love it, love it. I know I do. I can’t speak for every big guy. But you know, growing up, when you see football and when you see NFL’s greatest films, when you see all types of good football players, teams, it always had snow or bad weather. Always. Always. And that was one of these games, where if you love football, that’s where you wanted to be, in this type of weather, snow. Especially the way we’re built to play, the style of play from us. It played right into our hands. So, I was kind of excited about going into this game and playing in this type of weather. That’s just me. That’s just me. Before I got here, I never played in any type of weather like this. But once I became a New Englander, we’ve seen some pretty good games, some bad-weather games. It introduced me to the NFL, what football should be about, this type of weather. So, I was kind of excited to play in it.”

On what measures he takes prior to playing in cold, snowy conditions:

“I’m old school. I Vaselined the arms up and that’s about it. I put an extra pair of socks on this time, but other than that no. I just strapped it on and let’s go to play. I always said it, and Bill’s said it to us as a team, and I’ve always said it to teammates and even talked about it to my wife – people always make a big deal out of weather, the forecast. Oh, you’re going down to South Florida, it’s going to be 90 degrees; or you’re going to Chicago or playing against Buffalo, there’s going to be 80 miles per hour wind, it’s going to be snowy, it’s going to be below zero. I always say you don’t play against the weather. You play against your opponent. This was a prime example of going and playing against an opponent. I don’t want our guys to get sidetracked of how hot it’s going to be, or how cold it’s going to be, how windy it’s going to be. We’ll deal with that when we get out there. But don’t forget we’re going to play the Miami Dolphins. Or we’re going to play the Buffalo Bills. Or we’re going to play the Chicago Bears, like last night. That was probably one of the best points that [Bill Belichick] made to the whole team this week, was hey, don’t worry about the weather. Because they have to play in the same exact weather we’re playing in. So get ready to play the Chicago Bears football team, and I think everybody focused in on that and we walked away with a victory.”

On the defense rounding into form, much like Wilfork said earlier in the year would happen as the season progressed:

“It starts in practice. Just seeing guys attitudes and how they approached work made me a believer from Day 1, all the way back to OTA’s. These guys, as a team, we made a promise to each other: We’re going to give it our all. When we step on the field, we’re going to be a team, we’re going to play through whatever it may be, there’s going to be some ups and downs, there’s going to be some positives and negatives. But you know what, we’re going to play through all that. Once we get to the end of the tunnel, we’ve got to be able to finish ballgames. So, I saw it early, and I was always a believer. A lot people thought I was crazy. A lot of people wrote us off. But it was just something I saw in these guys. They work their tails off, man. As a football player, for me and I think for a lot of other players, the more you do the better you get; the more games you play, the more reps you get, the better you get. Because you start to see the game a lot clearer. And I think at this point later in the season,

December where you probably have to play your best football to be a good football team, I think you’re starting to see that with a bunch of guys on this team. And it starts with practice. For the past two weeks we’ve had good practices, everybody’s been tuned in, watching extra film, doing all the extra stuff they can do to make sure they hold up and we get an extra edge on the field. And it’s been helping us. And we’re going to need to continue that to get better down the road. So it won’t get any easier for us, we’re just in this for the long haul, we’ve got to grind this out.  This week we’ve got Green Bay coming to town. Coming off a loss, I’m sure they’re going to be pretty pumped up. It’s almost like a must-win for them, but each game we want to win, we go into each game expecting to win. So it doesn’t surprise me we went out and performed the way we performed. Two weeks in a row, if we didn’t play 60 minutes, we were darn close. And we see what we’re capable of doing once we play together. We know what we’re doing on the field. Don’t make stupid mistakes, eliminate penalties, all those little things that ruin a football team, we’re starting to get a little better in those situations. So we’re going to need to continue that to be a pretty good football team.”

On the Patriots ability to plug unknown guys in at any given moment and not lose a beat:

“You know what, you’ve got to credit Bill Belichik, his staff and the organization for going out and finding guys like this. And then on top of that, once they get here they learn what we do, they’re not idiots, they just learn what we do and know their role. Everybody knows if you’re a third-stringer or whatever it may be on this team, your number may be called at any given time. Somebody may go down, and then hey you’re in. You need to know what you’re doing. And I think for the most part we’ve been pretty successful doing that because like I said it starts back in practice. Bill put us in situations in practice where me personally, I think it’s the toughest situations you can be in. He gives it to us in practice. He has our thinking caps on at all times. I mean, we go through from a special teams period to a defensive period, back to a defensive, offense, defense, special teams situation. You’ve got this amount of time on the clock, no time outs, what are you going to do?

And he’ll want to see how we react when we’re tired, he’ll want to see how we react when everything is on the line. Just see if we know what we’re doing. So Bill will still drive you all the way down the field in a two minute drill at the end of practice when you’re totally blown out at the end of practice –  a two minute drill that goes on for 10 minutes and throw you right in the middle of a situation. This is the situation, what you going to do about it. And I think as the season went on, guys tuned in. Guys really tuned in and focused on what the situation was, and we covered a lot of situational football, and for the most part, situational football will win you games.