Urban Meyer Hopes the Ohio State Job is His Last

Urban Meyer has had an incredible amount of success at every job he’s had during his college football coaching career. He turned around a Bowling Green program that was awful when he got there, he put Utah in the national spotlight and guided Alex Smith to be the first overall pick in the NFL Draft, and then he turned Florida into the most dominant power in the toughest conference in America.After 11 months of embarrassment, a disappointing 6-6 season, and the program being in the national spotlight for all the wrong reasons, Meyer will be looking to the same things at Ohio State. The conditions are not ideal in Columbus. The NCAA has still has to decide what punishment will be handed down to the Buckeyes after a scandal rocked the program earlier this year and the expectations will be enormous for Meyer as he will have to fill the shoes left behind by Jim Tressel. However, if there is any coach in the country who can not only reach the bar set by Tressel but leap over it, it’s Meyer. The two-time national champion is the best coach the game of college football has to offer and will have the Buckeyes back at the top of the college landscape and in the national spotlight once again very quickly. This time for all the right reasons. 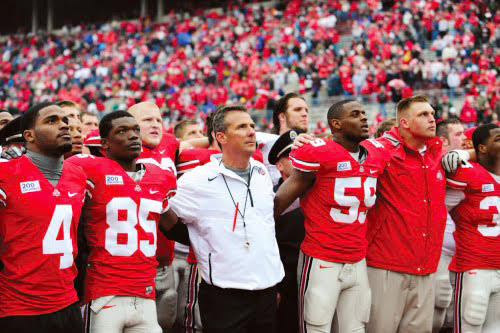 Urban Meyer joined The Dan Patrick Show to talk about why he decided to keep Luke Fickell on his staff at Ohio State, whether or not he had any doubts about taking the OSU job, if he thinks he will have a lot of pressure to win at Ohio State, whether or not he believes this is his last job, if he was surprised by the way people in Florida reacted after he was hired by OSU, and what he would do if he was coaching against Tim Tebow.

Why he decided to keep Luke Fickell on his staff:

“Yeah Gene Smith the Athletic Director asked if I would meet with him. I knew Luke from before. He actually came down when he was an assistant at Ohio State and visited our staff at Florida. We kinda knew of each other so when we met, we met for about four hours. He brought his wife over and my wife was there and it couldn’t have gone better. It was like we knew each other a long time. He’s a Buckeye, he handled the situation as well as he could and that’s all important but the reason he was kept on is because he’s a great football coach. We got to talk football the next morning and we’re fortunate to have him stay with us.”

Whether or not he had any doubts about taking the OSU job:

“Oh yeah. The contact was made on that Sunday but I kinda was watching all Fall and this whole NCCA you just don’t know until you know. I’ve always been an Ohio State fan as far back as I remember but I’m not gonna do something that’s not the right time. Once I was able to visit with people and do the homework I needed to do it was kind of a no-brainer.”

Whether or not he thinks he will be under a lot of pressure at Ohio State:

“I think there is a misunderstanding of pressure. I think there’s pressure at Bowling Green, I think there’s pressure when I was a linebacker coach at Illinois State. The pressure for me is to keep focused and keep it in centerfield and doing what I like to do. I love coaching players, I love teaching, and I love building teams. I’m not a big fan of dealing with all the nonsense in college sports. I can’t stand that and I’m not gonna do it. I’m not dealing with it. The NCAA has their job to do and the recruiting if I get involved with someone who is not doing it the right way then I’m gonna walk away. If that means we’re not gonna get a great player I’m not gonna deal with that. The pressures I’m gonna deal with are gonna keep everything in centerfield, focus on doing what I love to do and what I’m actually pretty decent at, and then I’m going home. I’m gonna be with my family and do the best I can to go watch my girls play sports.”

If he thinks this will be his last job:

“I think so. I’m never gonna make those, I’ve made some comments before that came back to haunt me because you just don’t know. I hope so.”

Whether or not he was surprised at the backlash from Florida fans:

“I was. I tried to say I didn’t watch or listen but I did. Not from Jeremy (Foley), the president, and the people that know that we put every ounce of everything we had for six years in there but there were fans that were upset when we beat Tennessee only by ten points. I mean like really upset. I tried not to let that bother me but I’d be lying to you if I didn’t say it did bother me a little bit. I heard the word dishonest and that couldn’t be the furthest thing from the truth. (Host: Yeah traitor. I heard that too.) Yeah that’s a shame.”

If he is surprised at Tim Tebow’s success:

“I’m not surprised at all. I think what he has done in the NFL from what I understand hasn’t really been done very often and to win that many in a row I knew he’d be successful but I am a little surprised that it happened so fast because the team was so bad for so long. I couldn’t be happier. Quarterbacks are a product of what’s around them. Tim has made an impact, but don’t forget those other guys. That defense is playing at a high level and that kicker walked out there and hit a 59-yard field goal. Tim’s a magical player and a magical person but Tim, I tell this to Tim, I tell him to cool out now and realize he’s just a cog in the wheel. I’m really happy for that team to experience the success they have had so far.”

On the game plan he would use if he faced Tebow: