Unlike His Counterparts, Adrian Peterson Elects Not to Hold Out
by Eric Schmoldt

With the NFL lockout dragging through much of the summer, the official offseason has been short, but that doesn’t mean it has been uneventful. Many of the league’s top running backs — Matt Forte, Chris Johnson and Frank Gore, to name a few — have all gone through holdouts. Not Adrian Peterson, however. The Minnesota Vikings feature back opted not to hold out, saying he just wanted to get back to business and let it all unfold later. Also, while all of us await seeing how much Johnson winds up making, Peterson doesn’t seem to think that will be a factor when it comes to his next contract. I’ve got a feeling it will. Adrian Peterson joined 105.3 The Fan in Dallas with Shan and RJ to discuss why he didn’t hold out, Chris Johnson’s contract talks, taking pride in being a feature back, Texas A&M possibly leaving the Big 12, on Jerry Richardson telling Cam Newton he didn’t want him to have any tattoos or piercings, and not having Brett Favre come up in conversation all the time anymore. 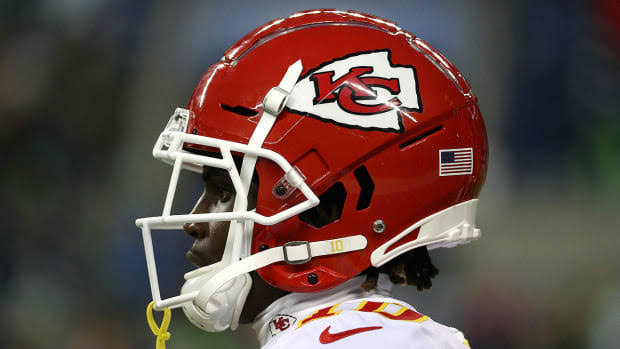 Matt Forte, Frank Gore and Chris Johnson have all had holdouts, why didn’t you do the same?:

“I’m pretty much in a good position right now. I’m kind of in the driver’s seat, so I just decided, hey, it’s my last year of the contract, I’ll stay faithful to it and I’m going to go out and focus on doing what I can do to help this team win a championship. … Everything else will work out on its own.”

How closely are you following the Chris Johnson talks to see what kind of money he gets?:

“I’m really not following it too much. To be honest, I wish him the best. I hope he gets as much as possible. But I don’t feel like whatever he brings in will affect my contract at all.”

Do you carry it as a badge of honor that you remain a feature back while many other teams have two
running backs?:

“Yes I do. I definitely take pride in that. That’s something I’ve always took pride in, being a back that can do everything, that can carry the load and that can be a focus point for defenses. When defenses come in, their number one objective is to stop the running game.”

What is your reaction to all the talk of Texas A&M leaving the Big 12 and shaking up your old conference?:

“Hopefully they don’t make that move. But in the big scheme of things, we’ve already lost a couple teams. I would hate to see that happen because, in the end, it’s going to break up the conference and there’s no telling where the rest of the teams are going to end up. I know when it boils down to it it’s about making a business decision and seeing what works best for the pockets. I’m just going to have to wait and see how things unfold.”

Jerry Richardson, Panthers owner, said he didn’t really want Cam Newton getting tattoos or piercings. Would that bother you?:

“No that wouldn’t bother me at all. To each his own. No matter how many tattoos, he’s got, he’s still going to come out and perform the same way. I don’t think that’s going to affect anything. Now him being the face of the franchise, I guess that’s pretty much the reason he would say something like that. … There’s a lot of guys that have tattoos that’s doing a great job.”

How nice is it to not be having to talk about Brett Favre?:

Is he coming back?:

“I don’t know. That’s a good question. You never know with Favre, man. He likes to pop up midseason.”