Tony Stewart Is Gaining Momentum Despite The Slow Start

It has taken some time for Tony Stewart to climb back from an early hole he dug himself into to get back into the Chase, but he finally has.  He can credit the turnaround to having top ten finishes in five out of the last seven races.  Even after his twenty-fifth place finish in the Coke Zero 400 at Daytona from this past weekend, Stewart is still in ninth place ahead of Greg Biffle, Dale Earnhardt Jr., and Carl Edwards.  This weekend, Stewart is excited about racing at the Chicagoland Speedway because he has two wins and seven top-five finishes there.  Although Stewart is on a bit of a dry spell this season, with eight top-ten finishes and no wins, he is poised to end that this weekend in the Windy City.Tony Stewart joined the Dan Patrick Show to talk about how he calmly got out of his car while it was caught on fire this past weekend, what his first reaction is when he gets into a huge car crash similar to Sunday’s, and whether he thinks it is good for any sport to have a player so dominant that the championship runs through him each year. 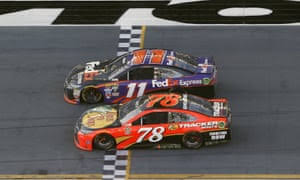 How he calmly got out of his car while it was caught on fire this past weekend:

“Well the Burger King car was flame grilled at the time, pre-flame grilled.  Basically it was going out, it wasn’t like it was becoming a big raging fire.  In all honesty, I have been on fire before and with all of the Hans devices and all of the extra gear that we have in there now, it is almost a situation where you get yourself to calm down and be methodical and go through the steps one at a time.  If the fire were getting worse, I would have been in a bit of a hurry but it was going out.  So I just made sure that I kept my time and do everything right and got out the right way.”

What his first reaction is when he gets into a huge car crash similar to Sunday’s:

“Well to be honest, where we were at when we went into turn 3, out of the corner of my eye I saw the #2 car ahead of us going down into the grass so you know automatically that there is going to be trouble there.  But by the time I got into 3, there was so much smoke there that you couldn’t see through it enough to know where to go.  The spotter couldn’t tell us where to go.  Everybody was just blocking the whole race track so there was nothing you could do in that particular situation but hold on and you just sit there.  We dodged three of those wrecks in the race earlier and you will be like, ‘Am I cat with nine lives?  Am I going to make it through the whole night without running out?  I guess four was the lucky number that we got into the fourth won.”

Whether he braces for impact when he sees a crash is imminent:

Whether he thinks it is good for any sport to have a player so dominant that the championship runs through him each year:

“I don’t think it is bad.  Every form of a sport is about guys doing a better job than the next guy.  Whether it has been the Yankees, whether it has been the Lakers, in Formula One when Ferrari and McLaren had their runs at it that is part of the sport.  That is part of doing a good job.  I don’t think it is bad.  It shows that hard work and if anybody can find an advantage that this day in age, it pays off big.”