When I listen to interviews that I post on Sports Radio Interviews, I look for certain things…interesting, funny, newsworthy, a big name, a really random interview guest, and of course controversial.  One of the reasons I started this site was because I knew that great audio and news comes daily from sports radio around the country that no one knew existed.  I’ve always felt like sports radio was an underappreciated medium with a blanket stigma of being screamers and not given enough credit for the interviews they produce on a daily basis. I recently did a post on Tim Brown where he had a controversial story about Al Davis (see quotes below).  Brown’s quotes on Al Davis have made their way to ESPN.com and ESPN TV, Pro Football Talk, Yahoo, USA Today, and many other newspapers and football sites. “Meeting Al (Davis) was pretty unique. I found out five or ten minutes after my first practice there that he hated African-American athletes from Notre Dame. 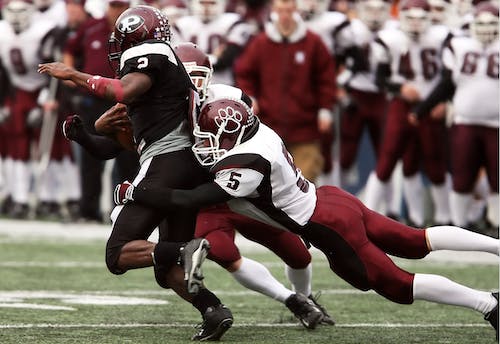 And they literally told me that. They literally told me that because we’re known for using our education more than our athletic ability that he thought that I would be one of these guys that would basically take the money and run. I don’t know if that was a ploy to get me amped up, but it certainly worked.” As I stated in my original post, I worked with Tim Brown in 2007 and I’m very fond of him.  He was always candid with any football question I asked him.  I speculated that may be the reason he doesn’t have a studio job.  After about four days of controversy surrounding this story, Tim Brown and his agent sent me his response to all the media surrounding this story.  I know Tim and can assure you this came from him and it’s not one of those crisis PR statements like we see with A-Rod, Michael Phelps, or Roger Clemens.

“I would like to give some face value to my recent comments on a radio interview: If you read the statement carefully, you will see it says “they said”, not Al Davis said. Early in my career , Al Davis and I may have had some contentious years , but none centered around him being racist.” “I am fully aware of the history and Mr. Davis making moves over the years. I lived some of them. I have also seen Mr. Davis do things for his players, African-American players that only those in the Raider family would know.” “Please, read or listen to the statement for what it is and not what everyone wants it to be.”