Is anybody else out there as sick as I am with the ongoing negotiations between Manny Pacquiao and Floyd Mayweather Jr? They’re not going to fight, then they’re going to fight, then they’re not going to fight again. Can’t this fight just happen already? Everybody in the boxing world wants the fight to happen. They are the two best pound-for-pound fighters and it has been rumored that this fight will happen for a while now. However, the two sides just can’t come to terms on an agreement. Now a deadline has passed and Pacquiao may turn his attention to Miguel Cotto or Antonio Margarito. No offense, but I have zero interest in either of those fights. There’s one fight I want to see. There’s one person that I’m not sure Manny Pacquiao can beat and his name is Floyd Mayweather Jr. I don’t know if it is Manny Pacquiao’s fault or Floyd Mayweather’s fault, but the two promoters need to find a way to get this agreement done once and for all. Bob Arum joined Fox Sports Radio with Stephen A. Smith to talk about what happened with the negotiations between Manny Pacquiao and Floyd Mayweather, why the fight will not happen as planned, and whether or not Pacquiao has agreed to the terms of the deal Mayweather asked for. 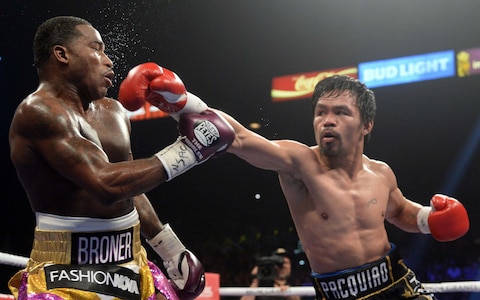 On what happened in the negotiations:

“Well this has been going on for two months and we have been negotiating through Ross Greenburg, the President of HBO Sports, and Floyd had a representative on the other side. It appeared to me that we had reached an agreement. We never had the assent of Floyd Mayweather. He never, ever agreed to anything and he never let us know if he would fight or not. At this point, I had to go ahead and make another fight for Manny Pacquiao. We had a deadline which is a deadline ending the exclusivity period. I will now go out and speak to Margarito and his camp and Cotto and his camp and try to arrange a fight with either of them for Manny Pacquiao. If during that time Floyd says I want to fight and comes to the table, that would be our priority. Everybody…you want that fight to happen, I want that fight to happen, Manny Pacquiao wants that fight to happen, but Floyd may not want to do that fight this year. I think there are reasons why he might not.”

On what the reasons are that Mayweather may use to not make this fight happen:

“Well one of them is his Uncle Roger has been his trainer for the last ten years, they have a great, great relationship and Floyd relies on him. Roger is in legal difficulty and there is a criminal case against Roger which apparently goes to trial August 2nd. There’s nothing any of us can do about that, but that certainly has to concern Floyd. Secondly, Floyd made a lot of money in the Mosley fight and he may decide that it’s enough for the year and I will revisit the issue next year. As far as we’re concerned, we’re saying ‘look if Floyd isn’t available this year, hopefully Manny wins his fight in November and were happy to fight him next year.’ There’s no animosity unlike what happened last time around. This time there is absolutely no animosity. If Floyd would like to do the fight next year, there are reasons for that decision.”

On whether or not he is surprised that this fight won’t be happening right now:

“Yeah, I’m surprised but I don’t want to say anything that exacerbates the situation which would prevent the fight from happening next year. I want this fight badly. Boxing needs this fight badly.  It is when people talk about boxing now, the first thing they talk about is this fight. You know that because you’re in touch with the people. In speaking to me you’re speaking to the choir. I agree with you 1000 percent. Why Mayweather is doing this and so forth? That question has to be answered by him. Hopefully all these issues that don’t relate to me, they don’t relate to you, they don’t relate to any financial issues, those issues if they are the ones that are preventing the fight like Roger’s pending criminal case will be handled, will go away and the fight can happen.”

On whether or not Pacquiao has agreed to the terms of the fight:

“Again want to make this as noncontroversial as possible, but the terms that he laid down that will satisfy him about a clear playing field, have been agreed to this time around by Pacquiao.  (Host: So Manny Pacquiao has agreed to go through Olympic style drug testing and all that stuff?) Yes. Again I’m trying to determine the reasons and the only thing I can figure out is Roger.”