It appeared to be inevitable that Stan Van Gundy would be the odd man out in Orlando after the season had concluded, especially after all the drama surrounding Dwight Howard over the course of the season. In early April Van Gundy told the press after a pre-game shootaround that his star player wanted him fired. Howard emphatically denied this statement. The head coach-star player marriage soured despite the Magic making the playoffs and Van Gundy having a winning record during his time in Orlando.Well the closest man to Stan would be his brother Jeff. His brother sure didn’t disappoint in the following interview. Jeff wasn’t shy about professing his disgust for the Orlando Magic organization, particularly Magic President Alex Martins.Jeff Van Gundy joined 98.7 ESPN New York with Stephen A.Smith and Ryan Ruocco to discuss the NBA reviewing all flagrant foul calls, the NBA instituting a penalty for flopping on the court, his reaction to his brother, Stan Van Gundy, being fired by the Magic and his disrespect for Magic President Alex Martins.Did you believe Tyler Hansbrough deserved to be suspended?“No I didn’t think…first of all I didn’t think Tyler Hansbrough foul was flagrant. To me the flagrant fouls are so inconsistently called. 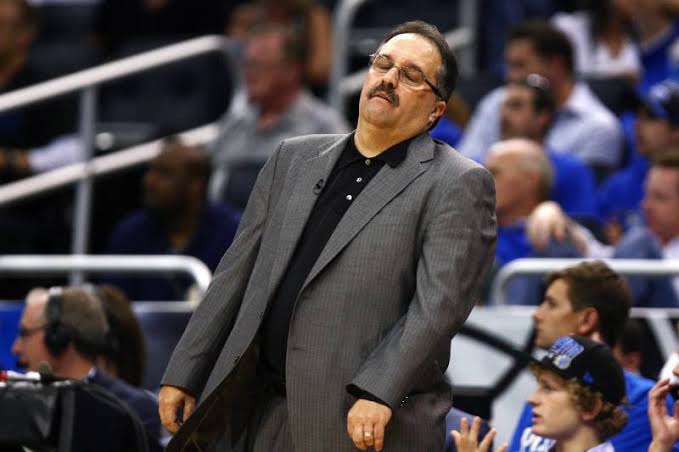 Like Game 6 in the Bulls-76ers series where Omer Asik was just taken down by Spencer Hawes. That wasn’t called a flagrant and it wasn’t upgraded to a flagrant. To me that was clearly a flagrant where as this one? It was borderline. Here’s my thing I think the bigger issue is this: Why do they only review flagrant two flagrant fouls? It’s such a critical call that every flagrant foul should be reviewed to see if in fact in slow motion if they saw the same thing they thought they saw in the heat of the moment and in the game. I think it would be or it should be an absolute…it should be immediately the league office changes today that the flagrant foul is such a critical call that they put it to replay no matter if it’s ruled first a flagrant one or a flagrant two.”Would you like to see a new rule in the NBA where flopping is called a foul? “I would like to see a two-pronged attack to the excessive flopping that is overtaking the NBA. One as you said if an official can see the flow of the real game that a flop occurred than the foul that brought about the flop is negated and the flopper is assessed a technical foul. I think the league office they have a lot of people working for them go back through every game and any exaggerated contact that is a flop during a game you start accumulating technical fouls. You accumulate points that will eventually lead to suspensions. You’re not looking for the ones that are minor. You are looking for the ones where a guy is definitively trying to trick an official because to me tricking an official is not an NBA play and I think it’s gone where teams have one guy who would flop to now where our stars are doing the flopping and that’s not good for basketball.” Your thoughts on your brothers dismissal as coach of the Orlando Magic?

What is the future of your brother Stan Van Gundy moving forward? “As you just said his coaching is beyond approach, so he doesn’t need me to defend him. At the same time teams throughout professionals sports they change coaches. Now how you go about it is important. For him to have been in the office all day and the President, Alex Martins, knows that he is there and let them leave and then he calls him on the phone to fire him? It’s unprofessional. It’s unprofessional. To hide behind the fact or try to make everyone believe that Dwight Howard didn’t have a part in this is absurd. Say listen we fired this guy because we know this our best chance to keep Dwight Howard. Dwight Howard and I decided to fire him. To do anything else is playing a game of semantics. It really is. Third at the press conference that they hold to be going on and on how difficult of a day it is for you personally, Alex Martins to fire people? He does this every time he fires somebody at the Magic with countless disregard at how it impacts people that he just fired. Now my brother is fine financially.

Countless disregard for what normal Americans are going through. He’s fired many people there and he always comes up with the same thing that it’s been a tough day on me without any regards for their feelings. Finally and this is the biggest one to me he said that my brother is the finest ‘X and O’ coach he has been around in his 25 years in the business. Okay listen [Alex Martins] all you have done in your 25 years in the business is release press releases and run the business side. You don’t know if a ball is blown up or stuffed. You don’t know if the pick and role coverage on the side is right or wrong. Just say that I have no knowledge about basketball. It’s offensive when someone who has no knowledge about basketball even in a positive comment tries in those ways to sort of negate what Brian Hill did as a coach or what Matt Guokas did as a coach. He doesn’t know one thing about basketball so please hold off your comments on my brothers expertise since you know nothing about basketball.”