Robbie Gould: “It would be very unfortunate if we would lose pre-season games, but unfortunately I think that might happen.”

Robbie Gould has been on record saying that he doesn’t feel that regular season games will be lost for the upcoming season. The Chicago Bears kicker is now going on record to let the fans know that although he believes it would be unfortunate to have regular season games lost he has a gut feeling that pre-season games may be sacrificed with the way the current collective bargaining negotiations have been going.Gould is by no means casting doom and gloom on the ongoing CBA negotiations. He’s encouraged that both sides continue to meet and have made huge strides in the process as a result of both making certain concessions. Gould still believes though that pre-season games will be missed, beginning with the Hall of Fame game they’re scheduled to participate in this year on August 7th. If the Bears and their opponent, the St. Louis Rams, are going to even consider suiting up for the Hall of Fame game in less than a month, one would think that a new CBA agreement would need to be reached this week. If that happened, both teams could get into training camp around the normal July 22nd time period. Everything would have to fall right for a new CBA deal to occur and with the way the work stoppage has gone I would not take that bet to Vegas that things will change just yet. For an NFL kicker Gould brings some good commentary in the following interview with WSCR in Chicago and he’s on point with every assessment.Robbie Gould joined WSCR in Chicago with Zach Zaidman to discuss what he thinks about the target date of July 21st for a settlement to the lockout, the need for a CBA settlement to be reached this week in order for the Bears to realistically be ready to play in the Hall of Fame game, the dangers of playing in the Hall of Fame game without the necessary two weeks of training camp, the off-season being condensed to one week if a lockout settlement is reached on July 21st, and his confidence that regular season NFL games will not be lost. 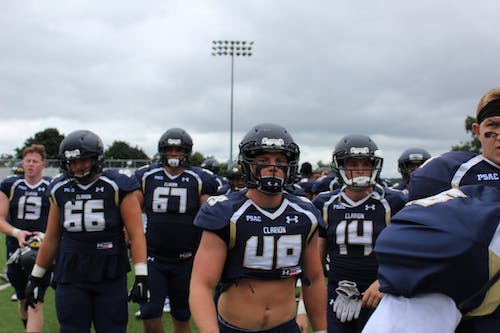 What has been going on with the NFL lockout and the July 21st date being talked about? Are we going to have a settlement in place on July 21st as it has been reported?

”For the Chicago Bears to be able to play in the Hall of Fame game doesn’t a deal between the owners and players have to take place this week?

“Well it has to happen immediately. I mean there is a lot of work that would have to get done between having a settlement in place obviously before a season can even start. You have to sign free agents. You have to sign all of your rookies, undrafted free agents, draft picks. You can’t go to training camp without forming a team, so there would have to be some sort of what I would consider a little bit of leeway in time to get everybody in place and each team in place ready to play and have a productive football season. There’s a lot of people involved in it. The owners have to digest a deal and understand the language from a general manager standpoint, a contract standpoint, negotiator standpoint. Agents have to understand it. Players have to understand it, so there’s a lot that’s going to have to happen in a short period of time in order for the league year to start on time, but also to have it run very, very, efficiently.

”As a player representing the Chicago Bears would you be willing to play in the Hall of Fame game without the necessary two weeks of training camp to prepare?

“Well I think you have to have the two necessary weeks. You can’t go from not having any activity whatsoever to straight full pad hitting within two weeks because obviously if that happens guys might have the opportunity to get injured more just from not being able to hit each other all the time, but also you have to have some sort of sessions leading up to those games to make sure everyone has the opportunity not only to stay healthy, but to very efficient and have a productive season.

”Everything is going to be condensed in terms of the off-season if the lockout were to be lifted. Would it be fair to say that you are going to have one week to form a roster once a deal is reached?

“Yeah if you look at what coaches have been able to do this off-season and teams. They have had just as much as I would consider down time as the players have, so they have obviously I’m assuming spent time trying to figure out what free agents they want, put a price tag on those guys in the ballpark of what they think might be the old CBA numbers. Also I’m sure they are sitting around trying to figure out what, where and how and when and why to create competition for guys currently on the team who are under contract and what’s going to make teams better, so everything that is going to happen is going to be condensed from here on out. The players understand that. I’m sure owners understand that. I’m sure coaches understand it, but they have had a lot of time to get things in place whether it be the play books, the practice schedules or what their outline of free agency and draft picks and undrafted free agents might be, so I’m sure they are excited just as much as we’re excited to play football and hopefully a settlement can be reached in the very near future, so that everything will start on time and we can play football here come the fall.

”Why are you so confident that there will be no games lost in this NFL season and full regular season?

“I think it would be unfortunate. It would be unfortunate on both ends. I think they have been working so hard at it for so long recently that the game is too great for everybody. It’s a great sport. Everyone loves it. The players want to play. The owners want to have the players play. Unfortunately you had to go through a bunch of legal and litigation opportunities to get to this point, but I think at the end of the day that everyone will come to their senses and make sure everyone gets a fair deal and understand what’s at stake for both sides and we’ll have a deal put in place that everyone can play under and be happy and I think it will be great for not only the players, but it will be great for the owners as well. I think the progress they have made to this point has been great and hopefully in the near future a settlement will be reached.