I’m beginning to think that I would be much more entertained by NBA players if teams would record their players’ in-game card games than the entertainment value I actually get from them on the court. Intra-team gambling debts were at the core of the gun problem for Gilbert Arenas and the Washington Wizards last season and they were at the helm of a recent fight between Memphis teammates O.J. Mayo and Tony Allen. Ray Allen says how people handle their card games and gambling debts basically comes down to whether the players are real men or not. He says the Celtics are mature enough to pay off their gambling debts in a timely fashion or they are the subject of ridicule, but understands that some teams don’t have that maturity. Ray Allen joined 98.5 the Sports Hub in Boston with Toucher and Rich to discuss his mentality on the basketball court, picking up extra minutes, the Celtics’ in-flight card games, whether card games should be banned and how the players deal with situations where teammates owe each other money. 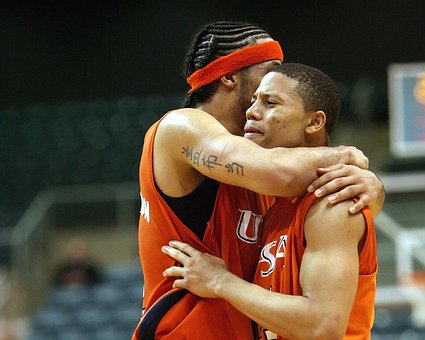 On his basketball mentality:

On the extra minutes he’s having to play due to other players’ injuries:

“I’m built for it. Since I’ve been in Boston, there have been several times where Doc [Rivers] has looked at me and said, ‘I’m going to need you to play this whole quarter.’ I’m like, ‘Hey, this is what I’m built for.’ During down time, in between games, I do whatever I can to stay off my feet … so when the games come I’m ready.”

On whether he and his teammates play card games on the plane and have ever had any sort of incident like the one involving former teammate Tony Allen and O.J. Majo recently:

“Yeah, it’s tough because if you think about our schedule, we’re on the plane probably two or three hours, probably some of the most time of our time together is on a plane. You watch movies, you read, you play cards. … There’s so many things that you do to pass the time and cards is one of them. … Your competitive juices never turn off and it turns into playing cards. It all about the culture of the team you have. I would never try to fight one of my teammates.”

On people who think those games should be banned:

“It’s hard to really say. It takes a mature group of guys to be able to deal with a situation like that. There are cases that on some teams, that’s possibly something you should do, but for us, we have a mature group of guys. … We know how to take care of ourselves and be men and make sure that certain things don’t take place. We’re responsible for each other. There’s some teams that just aren’t capable.”

On how the Celtics handle things when someone is owed money:

“We just have a committee. We always talk about, you have this amount of time to pay your debt, whether it’s the next trip or whatever. So if you’re playing cards and you lose, everybody’s like, ‘You owe this dude that much money, you’ve got to pay him by the next time we get on the plane.’ It’s kind of like out of shame that we get guys to pay each other back. I, personally, stopped gambling.”