The last time the fight world saw “Sugar” Rashad Evans inside the cage he got worked over and knocked out by Lyoto “The Dragon” Machida.  That loss still stings for Sugar because not only was it his first loss of his career but it also cost him his light heavyweight championship belt.  There is no question that Evans wants to avenge that loss.  It’s also no secret that Evans wants a fight with Quinton “Rampage” Jackson.  In fact that is the fight that every fight fan wants to see in the light heavyweight division.  They coached on opposite sides on the reality TV show, the Ultimate Fighter, they did not get along and it has sparked a lot of interest from fight fans. 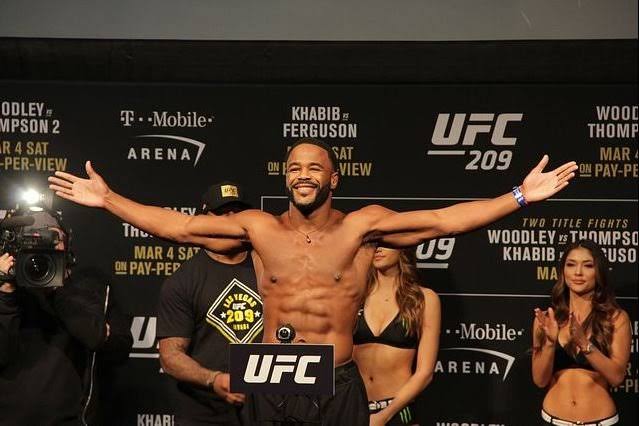 However, Rampage has decided to step outside the cage and in front of the movie camera, which means the fight that many fight fans want to see and were supposed to see may never actually happen.  However, before Sugar can even think about a potential fight with Rampage or getting another crack at Machida, he needs to get past his opponent this weekend, Thiago Silva.  Silva, like Evans has just one blemish on his record and it was against Machida. Rashad Evans joined 106.7 the Fan in Washington D.C. with LaVar Arrington and Chad Dukes to talk about his upcoming fight with Thiago Silva, bouncing back after a loss the last time he was in the cage, what his plans are in the future, and who he thinks is the best pound-for-pound fighter in MMA.

On why he thinks he has become so popular now amongst the fans:

“I think it was a lot to do with the fact that I came out so good on the Ultimate Fighter.  I mean you can go out there and get as many knockouts as you can, you’ll still get fed, but people want to see your heart.  They can see that you’re a caring person than they can really relate to you on a different level and I think that’s why I’m getting such a great response.  They made me look good, they made me look good.”

On his game plan against Silva:

“It’s just like you said, it’s just getting at the fella.  That’s what I gotta do.  I gotta attack him at different levels.  I can’t be one dimensional on one level because I think if I was one dimensional than I’m pretty sure I’m gonna shut myself down in other areas which may be an area that he can go ahead and exploit.  I just look to try and open up a balanced attack and see what else happens.”

On whether or not he thinks he might get caught up in his opponent’s game plan like he did against Machida:

“The thing is just not getting caught up in games at all.  Just imposing my will and doing the things that I need to do.  I think as long as I do that, I will find the opening that I’m looking for.  As long as I’m reacting to what he is doing, I’m always going to find myself on the defensive end and therefore not being able to find my rhythm.  If I go out there looking to establish my rhythm and do what I need to do, I’ll get him reacting and I can dictate the pace of the fight.”

On what his goals are moving forward:

On who he thinks is the best pound-for-pound fighter in the UFC:

“I would say the pound-for-pound best is George St. Pierre.  I say that over Fedor (Emelianenko) and Anderson (Silva) because he has the ability to take the fight exactly where he wants to go.  Anderson is very good standing up and he has shown some good stuff on the ground as far as being able to do submissions and stuff like that but you see those areas where he is kinda outta water when he gets taken down and he’s getting thumped a little on the ground when he went against Dan Henderson.  He doesn’t have the ability like George St. Pierre to take the fight anywhere he wants to be and be creative every single place in the octagon and I think that’s one thing that sets George apart from the other two top guys.”