Well so much for that whole boxing vs. MMA argument I would say. People have been debating boxing vs. MMA for a while now. I think the conclusion that all of us can come to after Saturday’s fight between Randy Couture and James Toney is that inside the cage an MMA fighter will always have the advantage over a boxer. Randy Couture dominated James Toney on Saturday night and showed that whether it was a flabby James Toney or an in-his-prime Manny Pacquiao, a boxer is no match for an MMA fighter with so many weapons in his arsenal. Conversely, Randy Couture would’ve been beaten just as bad as James Toney if the two guys went in a boxing ring and weren’t allowed to use mixed martial arts. 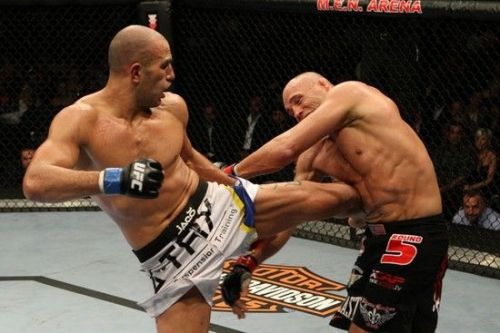 The difference though is that Randy Couture is smart enough to realize that he would be at a disadvantage in a boxing ring where he can’t do the things that he does best. James Toney didn’t get that though. He ran his mouth, continued to talk about what he was going to do and how successful he would be in MMA, and proceeded to get embarrassed. Randy Couture finally stopped his mouth from running, but at the same time I learned absolutely nothing from Saturday night that I didn’t already know. Randy Couture joined 790 the Ticket in Miami with Dan LeBatard to talk about how pumped he was after beating James Toney the other night, why Dana White decided to make this fight happen finally, whether or not James Toney would beat him in a boxing match, what it was like to be in the movie the Expendables, and how he stays in such good shape despite being 47 years old.

On why he was excited after such an easy fight:

“Well you never really know what’s going to happen in a fight. I certainly had to take James seriously and I felt like I had a great chance if I took him to the ground that he wasn’t going to be able to learn enough to survive there and it turned out that was an accurate assessment. That made the night pretty easy for me.”

On why Dana White made this fight happen:

“I think the question has been asked since I’ve been involved in this sport, the comparisons between mixed martial arts and boxing. I think James hounded him enough that he gave in and decided to make the fight happen and kind answer those questions. Hopefully (it will) attract a lot of people from boxing that weren’t giving us a fair shake as a real sport.”

On whether or not James Toney would beat him in a boxing match:

“I have never had allusions of being a world class boxer. As long as I’ve been wrestling, James has been boxing. I think it would be silly for me to think that I’m gonna go in and do well against a world champion boxer and I think it was silly for James to think that he was going to step in and do well in mixed martial arts. I think given time, he can be an effective mixed martial artist but he’s got a lot of things to learn.”

On what is next for him:

“I don’t know. We’ll see what they want to throw at me next. Hopefully it will be interesting. I’m still looking for some movie parts and that certainly got easier with the success of The Expendables. I’m having a good time and just continue to March.”