Peyton Manning, Co-gm Of The Colts

Bill Polian is a smart man.  He knows how important it is to keep your best player happy.  Especially with a new head coach with no NFL head coaching experience in Jim Caldwell.  I know there’s a reason the word mock is in mock drafts, but there isn’t one mock draft that I saw that had the Colts talking a running back in the first round.  They had more pressing needs including defensive tackle, offensive line, and linebacker (which they think they can pull anybody off the streets and turn him into a successful linebacker).Yet, I can’t say I was surprised when the Colts snapped up running back Donald Brown of UConn.  Joseph Addai took a major step back in his third season averaging only 3.5 yards per carry and wasn’t very durable.  Plus it’s imperative for the Colts to have long, sustained offensive drives to keep their undersized defense fresh and raring to go.The Colts Co-GM Peyton Manning  (who in the picture above tells Bill Polian how many quality running backs he needs to win another Super Bowl ring) joined 1070 the Fan in Indianapolis to talk about drafting Donald Brown, his memories of the draft, the pressure of being the top overall pick, Matthew Stafford, and Mark Sanchez. 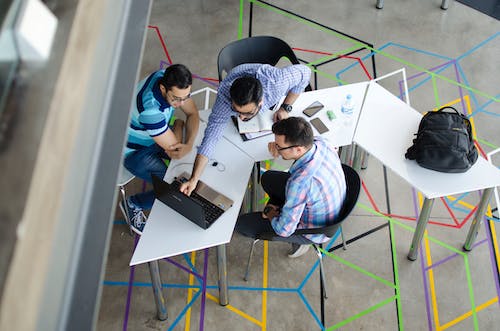 “Obviously I was interested, like everybody else, what we were going to do. I wasn’t 100% sure in what direction we were going to go in. I thought it might be a receiver, a defensive linemen; I did think a running back was a possibility – just some of the things that I had heard. I saw Bill a week before the draft; Bill kind of stays underground for 3 months before the draft and stays pretty low and keeps his choices kind of close to the vest. So I wasn’t 100% sure before the pick.”

“It truly is the beginning. I think there’s so much coverage on these draft guys before the draft, it’s a lot of hype. I hope these guys remember it truly is, it’s about your potential, the draft can be based on your potential. Now it’s time to go to work and earn that number one selection.”

On The Pressure Of Being A Top Pick In The Draft:

“Obviously they’re make a huge investment in you so, for me, I certainly felt obligated as soon as the commissioner called my name out, to make the Colts happy about picking me with the first pick…I remember one of the first questions that somebody asked me up there was, “What are you going to do with your new signing bonus? What are you going to do with the money that you’re about to make?”…For me, I remember it just popped into my head, I said, “I’m gonna go earn it. That’s what I want to go do. I want to go earn the investment that the Colts made in me.”

On When He Joined The Colts:

“I think you throw him in there right away. I think he’s lucky, the fact that he’s coming in with a new staff…That’s a big advantage because basically he’s just like all the other veterans as far as learning this new system, learning the way their new head coach is going to approach things, learning his philosophy…I’m waiting for somebody break that NFL rookie record for interceptions I set back in ’98. Hopefully Stafford will give it a good run. But I’ll say this, there’s no way that [I] could have played as well as I did in my second year if I hadn’t played in my first year and gone through those bumps and bruises.”

“Broadway Mark, it doesn’t have quite the same ring to it as Broadway Joe. Pete Carroll called me about talking to Mark Sanchez about maybe staying for his senior year…I had a chance to talk to him a little bit. I’ll tell you he made the right decision; being the [5th] pick in the draft, he got his degree, and I could tell he’s excited about playing pro ball. I think he’ll end up being a good player.”