With the possibility of an NFL lockout right around the corner, current players are trying to find ways to make a little bit of money and stay in shape in case there is no football in Hines Ward is going on ABC’s Dancing with the Stars and now it appears Tom Zbikowski is going to turn back to one of his first loves, boxing. Zbikiowski did some boxing while at Notre Dame and even has one professional win under his belt. As Zbikowski prepares for his fight in Las Vegas this weekend, Bengals Wide Receiver Chad Ochocinco has decided to challenge the former Golden Domer to a fight of his own. Johnson does some boxing in the offseason in preparation for the regular season and maybe he believes the best way for him to get a win over Zbikowski is by stepping inside a boxing ring as opposed to lining up against the Ravens on Sunday. Ochocinco better be careful because when he steps in the ring he won’t have a helmet for protection and Zbikowski might be more powerful of a puncher than he is a hitter on the football field.Tom Zbikowski and Chad Ochocinco joined ESPN 1000 in Chicago with the Afternoon Saloon to talk about a potential fight between the two, whether or not their respective teams have an issue with them fighting, and where they think the fight could take place. 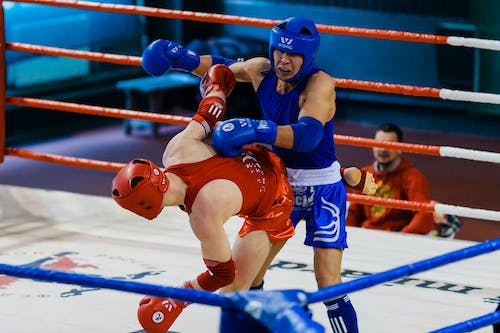 What’s happening between him and Chad Ochocinco and a potential boxing match:

“Yeah I’m waiting to. I know he started boxing I guess over a year ago or something and we play them twice a year every single year. I talk to him a little bit when we play him and stuff, but I know we’re trying to invite him to the fight and I’m getting my promoter to see if we can talk to his agent and maybe work out a deal for a fight.”

You have a ton more experience though?

Whether or not the Ravens have an issue with him boxing this weekend:

“They’re not upset, but with all the labor talks and everything like that, there’s really not a lot that can be said. I don’t even think they’re allowed to contact us. Contract-wise, legally I’m a restricted free agent. I haven’t signed with anyone so there’s nothing legally binding me to not do this.”

Chad, are you going to box this weekend or just support Tom?

“No man how are you gonna box? You prepare for a boxing match. (Host: You need 3 months?) Yeah it really doesn’t matter. It depends how the CBA goes. If the CBA doesn’t get settled, we as players could actually do whatever we want because we’re legally not under contract. That would be something fun to be up on a Raven off the field.”

How much experience he has:

“I’ve been training boxing for the last six or seven years before each football season with some of the best. Not like that means anything but I know a thing or two about boxing.”

If he would be willing to fight Tom in Chicago:

“Yeah most definitely. I mean Chicago is good, but with me and Zib fighting we can probably go sell out the MGM Grand easily.