A disappointing 8-8 season for the New York Jets has snowballed into a media firestorm. Jets players seem to be pointing fingers at each other while the front office is now left to rebuild the coaching staff. The latest issue out of Florham Park revolves around Mark Sanchez. On Wednesday morning, a published story claimed that Jets players were bashing Mark Sanchez behind closed doors and saying they wanted the organization to pursue Peyton Manning if he became available and healthy. Another element to this story regarded the Jets front office coddling Mark Sanchez and not giving him enough of a challenge with a backup quarterback. Overall the piece does a number on Mark Sanchez’s credibility and work ethic in the public eye. Nick Mangold would like to let everyone know that this story couldn’t be further from the truth. The Jets center wants the “unnamed” sources to own up to their words, so this can be resolved. Nick Mangold joined ESPN New York with The Michael Kay Show to discuss the “unnamed” sources coming out and owning up to their criticisms of Mark Sanchez, Sanchez’s work ethic, a possible divide in the New York Jets locker room, the New York Jets locker room not caring about winning or losing, believing in his quarterback, Sanchez being thin skinned, speaking to Sanchez since the story broke and pursuing Peyton Manning. 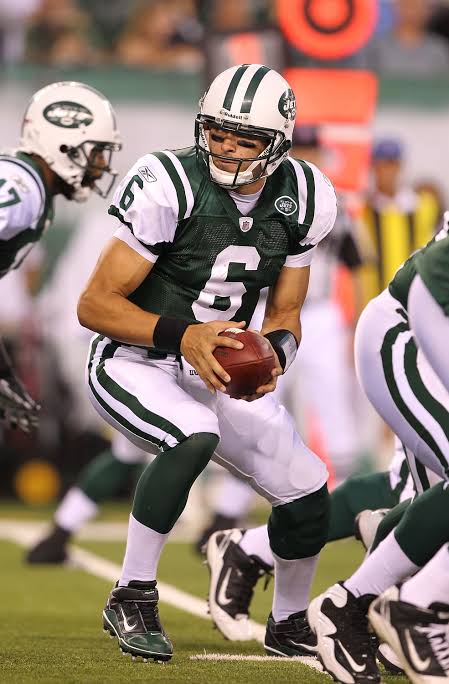 I completely agree with your take that if you want to attack Mark Sanchez then you should own up to it:

“Exactly. I think that was the big thing that hit home for me when I read it because people are going to have opinions all over the place, but at least put your name on it, so we can work these things out and not to have your name attached to comments, especially comments that are wrong and that are false is a little disconcerting to me.”

Does Mark Sanchez work hard enough? In the article he’s been characterized as lazy. Is that true at all?

“Not at all. That’s the thing really bothered me about the article was that it was saying he was lazy and didn’t put the work in and that he felt complacent. I think it couldn’t be more further from the truth. The guy puts in more work and more time, cares more about the team then I think anybody else in that locker room and for somebody to come out and not put their name behind it really bothered me.”

Is there a divide in that locker room where people don’t believe?

“That’s what is really getting me that I didn’t get that at all from any of our guys. I didn’t think that anyone would sit in there and say, ‘I don’t think Mark Sanchez can get it done.’ We all believe Mark is a fantastic player for us, who can win games, who has won games for us and to have this come out really makes me question where it came from and the motive behind it.”

Are there selfish people in that Jets locker room that don’t care about winning or losing?

“I don’t believe that. I can’t say 100 %. I haven’t gone to every guy and said, ‘Hey are you in it to win?’ I believe that the team we put together, the guys that we have in that locker room really care about winning and will do what they can to win. If that isn’t the truth I don’t want them here.”

Do you believe in your quarterback?

“Not at all. I don’t think you’d last 3 years in New York having thin skin. He’s taken criticism right and left and the best thing about him and I noticed this when he first came in that he was able to kind of block it all out and focus on what he needs to do. He’s carried that through the last 3 years.”

Have you talked to Mark Sanchez since this all went down?

“I have not. [Michael Kay: Will you reach out to him?] I will probably shoot him a text after things settle down a little bit and just see where he’s at and see what his mind is and hopefully…I am sure he has already moved beyond it, but I want to make sure he knows this is not representative of what we have in the locker room.”

If he got a clean bill of health would you be for this team pursuing Peyton Manning?

“If anybody could get a clean bill of health…shoot I’ll take Joe Montana if he had a clean bill of health. Dan Marino I think would be another good one. I think it’s all speculation. Mark Sanchez is my guy. He’s the one I want to go into battle with. I wouldn’t be too keen to seeing that be changed.”