Kyle Busch is one of NASCAR’s most fearless drivers, and some might even say the most controversial driver.  This past Sunday, he started the race in seventh place in the Chase, just eighty points behind leader Jimmie Johnson, and with a solid finish at Fontana, Busch had plenty of time to catch Johnson or at least challenge for the title before the season ends in Homestead, FL, in late November.  So what does that mean when he falls out of the Chase?  In my opinion, it hurts NASCAR because people like to see him race and it becomes less compelling.Temperamental, opinionated and testy at times, Busch is either loved or hated by NASCAR fans, and he revels in being the object of those conflicting passions.  Classic example was when he smashed a brand new Gibson Les Paul guitar trophy into the ground three times after winning a Nationwide race in Nashville.  People were up in arms about it but I applauded his efforts.  With Busch out of contention for the championship, he will still try to win the remaining Chase races and be a spoiler for drivers still in the hunt.  It would be so much more intriguing than if Busch, a winner of fifteen Cup races in the last three years, went into the final Chase races neck and neck with the leading drivers.  NASCAR needs more people like him that actually have a personality on the circuit if they want to gain back the popularity they once had.  Until then, NASCAR will continue its downward spiral.Kyle Busch joined WKNR in Cleveland to talk about whether he can get back into the Chase or whether it is too late, whether he changed the way he approached the season this year so that he could make the Chase, and how the Nationwide Series has gone for him this year and his thoughts on what he did at Bristol. 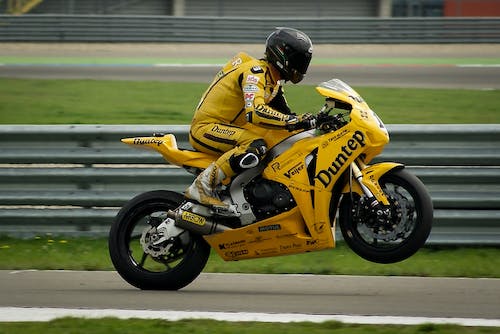 What he thinks about David Reutimann and how drivers not in the Chase can affect those that are in the Chase:

“Yeah you know it was just a bummer deal.  Of course you would not rather have those issues or what have you.  But we’ve talked, we put it behind us and we are moving on.  Hopefully we can have some good racing here down the stretch.”

Whether he can get back into the Chase or whether it is too late:

“Well realistically it is too late, but anything can always happen.  We never give up.  We’ll keep fighting for what it’s worth and try to get the best possible finish for the points that we can and go on into next year.  But we’re trying; right now we’re going to shoot for a top-5 in points.  We feel like we can get there but you have got to have some really bad luck on those guys that are all up in front of you.  It is not just going to take one.  You can’t just count on Jimmie Johnson falling out of there because then there is still going to be somebody else that doesn’t quite have the bad luck that he might but it’s going to be tough.”

Whether he changed the way he approached the season this year so that he could make the Chase:

“We took a few less risks but not too many.  We still have got to go out there and race for wins and race for what we can in order to get the points that we could to make the Chase, and what have you, but we’ve been trying to play it mart these last few weeks and unfortunately Kansas came about and then last week at California we had some motor problems.  It just didn’t all play in our favor but we look forward to the next few weeks and trying to win a couple of races before the year is out.”

His thoughts on joining Joe Gibbs Racing after being with Hendrick Motorsports:

“I think it has been really good for me.  Myself and Joe Gibbs Racing, both have really become a great team together and being able to work with Dave Rogers and all of my guys and Jason Radcliffe on the Nationwide side.  It’s been really good and it’s been really fun.  We have had a lot of success and we’re hoping for some more success but Denny has got a great chance to win a championship for Joe Gibbs Racing, so we are all pulling for him, and we have got to do what we can to help.”

“It is what it is.  It has been the same since it started and is going to be the same for a while until the Chase format isn’t what it is anymore.  We just got to go out there, we got to race against the rest of the guys the same way that we have done it all year long.  You don’t really change it a whole lot.”

How the Nationwide Series has gone for him this year and his thoughts on what he did at Bristol:

“It’s been awesome.  I think that being able to win all 3 at Bristol is pretty special, and obviously being the first in NASCAR to have done that.  It’s never been done before and hopefully it’s not done for awhile.  Maybe I can do it again before the year is out.  It’s something that a lot of drivers said, ‘Good job on’ or ‘congrats on’ because they know how hard it is to win at the Cup level let alone the Nationwide level, let alone all three of them on the same weekend, especially at a place like Bristol.  It just all came together and worked really well.  So we’re proud of it and the Nationwide stuff this year has been awesome.  We’ve been running really well and winning a lot of races.  So we’re hoping that there is still some more wins before the year is out.”