The whole he-said, she-said of the NFL labor negotiations got pretty old. In that sense, maybe it’s a good thing that the deadline came and went and we don’t have to hear the two sides say the exact same thing about one another. In essence, it felt like every day, folks from the players side came out and said the owners weren’t committed to getting a deal done. As the deadline passed, the owners’ side came out and said it was clear that the other side wasn’t committed to getting a deal done.Now NFLPA rep Mike Vrabel says Jeff Pash, the lead negotiator for the owners’ side, should earn an Oscar for the way he delivered that information upon the deadline late last week.But let’s be honest, all of them can come out and say whatever they’d like and blame whoever they’d like, fans really don’t care who’s fault it is, it’s simply time to get something done so we can stop talking about it and stop worrying about missing games this fall.Mike Vrabel joined ESPN Radio Dallas with Galloway and Company to discuss why a deal couldn’t be reached, his optimism last week and going forward, the mood of the discussions before the deadline, what the players told the owners behind closed doors, Jeff Pash’s comments that the players didn’t want to get a deal done and whether he believes there will be football next year. 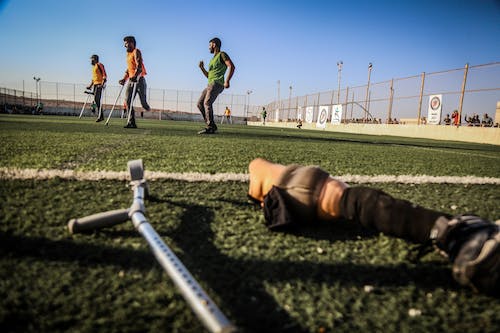 How did we get to this point?:

“If you look back over 16 days of mediation … I think they were able to bring the sides on the same page but really two sides on opposite ends of the market. We got close on some things, and we weren’t able to figure out why the players should bear the burden financially and take us places that we hadn’t been, as a union, in negotiating. … That’s basically it.”

Did he feel like it was going this way before the extension of the deadline?:

“I think that hopefully we all can remain optimistic going forward, but I think that action precedes motivation. There has to be something to get you off the couch and go to do something. … Decertification, for the players, was that action. Hopefully we’ll see who’s motivated to get a deal done.”

What was the mood like in the room as the negotiations went on:

“I think they were respectful. The few chances that the executive committee had the opportunity to sit in front of the CEC with owners at the table … we said things that probably players wouldn’t normally say, but the conversations were respectful. … We tried to keep emotion out of it, just negotiate.”

Give an example of something the players said that they normally wouldn’t say:

“When it pertains to talking to your boss, I think you carry yourself in a certain way, but when you’re representing the National Football League Players Association and guys that laid it on the line for you, you just take a little harder line. We really said that we had to see the financial statements. … There’s times that we can trust them as owners, and talking about $750 million was not one of those times that we were willing to trust anybody.”

Reacting to the league’s lead negotiator’s comments that the owners made a lot of concessions that the players apparently didn’t find to be good enough:

“I thought you were going to come in with the slow clap and someone say, ‘The Oscar goes to … Jeff Pash.’ … He stands up in front of a student body and he’s going to fire up the troops. … A deal doesn’t get done in small pieces. There’s a lot of parts to a collective bargaining agreement and a positive deal. A lot of those things weren’t the case, but even if they were the case, you don’t agree to things in pieces. A deal gets done in its entirety.”

Will we miss NFL games next year?:

“I hope that we don’t miss games and I don’t want it to come to that and I don’t think anyone does. … We just couldn’t get anything done. … I’d like to think that we’re a little more unified in what we’re able to do and we’re going to take care of those guys that crossed those picket lines back in the day and weren’t able to stand up for the rest of the players.”