For Mike Krzyzewski win No.963 is in the books and history has been made. Krzyzewski now stands alone with the most wins for an NCAA Men’s Basketball Division I head coach, moving past his mentor Bobby Knight Tuesday night with Duke’s win over Michigan State. It’s truly refreshing to find a head coach out there in college sports who stuck by the fundamentals of his program. Krzyzewski’s coaching career has been marked by consistency on-and-off the court for his students. Although Duke University basketball may be one of the most despised programs out there it sure wasn’t this way when Coach K took over the reins in 1980. In fact he was almost fired three years into his coaching career. In an modern era where the public has seen coaching legends such as Jim Tressel and now Joe Paterno embroiled in scandal, Krzyzewski’s legacy and image as one of the greatest coaches and teachers in collegiate sports history carries on. Mike Krzyzewski joined Fox Sports Radio with The Dan Patrick Show to discuss the loss that haunts him the most as Duke head coach, almost being fired in 1983, the win that stands out the most in his coaching career, when he finally will retire, having a head coach in-waiting lined up for when he does decided to retire, and why he doesn’t think he’ll be a part of the selection process for his successor. 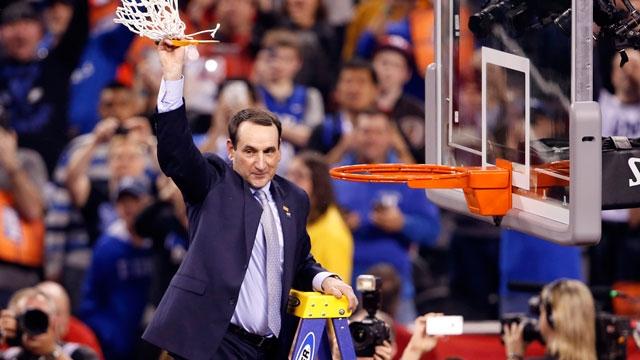 Give me the loss that still haunts you? The one that stays with you occasionally?

“Probably the worst lose was at the end of my third year. We lost 109-66 to Ralph Sampson and Virginia in the ACC tournament. He played the whole game. There were a lot of people who wanted me fired and a lot of our money givers. That could have been the breaking point.”

How close do you think you were to getting fired?

“With my administration I don’t think close at all. I think they knew when they hired me it was going to be a rebuilding process and they were going to stick with me. I never felt that from president [Terry] Sanford, the former Governor of North Carolina, from our president or Tom Butters our A.D. It may been close. I never felt the pressure of maybe being fired. I was probably naive. I was probably very naive.”

903 wins. Which is the one that stands out the most or you are most proud about?

Don’t you have to throw your assistant coaches a bone like Steve Wojciechowski and say you’ll be coaching here in?

“Well I have three guys who I think are head coaches in Steve Wojciechowski and Chris Collins and Jeff Capel. I let them do – not let them – I want them to do a whole bunch and they do in our program. This time next year all three of them may be having head coaching jobs.”

You have to have a head coach in waiting?

“I don’t think you have a coach in-waiting. I don’t like that scenario, where you say someone is going to take over for you.”

You won’t hand pick your successor?

“I don’t think that will happen. I think I will have a lot to do with it, but I don’t feel that is right where you as a coach are bigger than what the institution would think that it needs. The institution should listen to you and I should have a lot of input, but it should be the person who the new coach would work for is the person who should make that decision. Right now that is Kevin White our athletic director.”