Michael Vick: “I’ve had seasons where I ran for 1,000 yards and took a lot of hits and played 16 games while doing it.”

Michael Vick threw for 187 yards and two touchdowns, and also nearly reached 100 yards rushing during the Philadelphia Eagles victory over the St. Louis Rams on Sunday in the season opener. Vick was also sacked three times and hit plenty more, leading ESPN’s Merrill Hoge to proclaim that he wasn’t making the right reads, and that if Vick continues to take similar hits, he won’t play 16 games this year.Vick’s response? He agrees that he’s got some improvements to make, but he essentially doesn’t want to hear it. He’s going to continue to play the game he’s always played and that’s just how it’s going to be. Vick seems to have his head on straight and I love some of the answers he gives in this extensive interview. And, like, many, I can’t wait to see him play back in Atlanta this week.Michael Vick joined 97.5 The Fanatic in Philadelphia with Mike Missanelli to discuss his first game of the season, Merrill Hoge’s comments about his style of play, why he plans to continue playing the way he does while also trying to improve with his reads in order to minimize unnecessary hits, his new contract, how determined he is to justify it, how content he is with life at this point and his return to Atlanta. 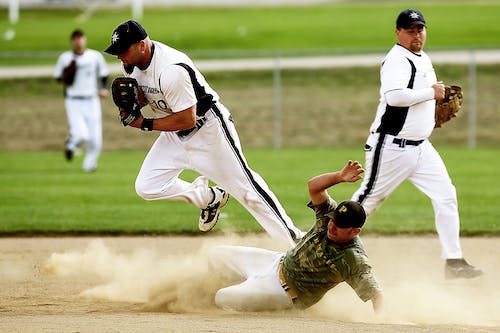 When you saw some of the lanes the Rams gave you on Sunday your eyes had to light up a little bit, didn’t they?:

“Yeah it does. You can only do so much on defense. The good thing is I’m learning a lot each and every day. … I thought the game could’ve been a lot smoother, but it’s a lot of hard work and it don’t come easy. I’ll tell you one thing, I’m tired of teams blitzing me like they do.”

Your reaction to ESPN’s Merrill Hoge saying that if you continue to take hits like you did in the first week that you won’t play 16 games and also him saying you’re not making the proper reads?:

“You have to be a quarterback to understand and know what’s going on in our system and what we’re doing. In certain regards, Merrill is right. We’ve got to be able to pick it up. A big part of that is me and recognition of what is going on and just playing as a team. But we all take responsibility for what happened. … We all feel like there’s things that we can do better and that’s part of the game. The way I played last week, trust me, that may happen six games out of the season or five games out of the season. The rest of them will be smooth and I’ll go in and I’ll make the reads and the protection calls that I need to make and it’ll be nice and smooth. I’ve had seasons where I ran for 1,000 yards and took a lot of hits and played 16 games while doing it. … Those hits don’t hurt unless you get me good. Other than that, I’m going to keep playing the way I play.”

So bottom line is you’re going to keep playing the way you always do?:

“It goes to show that the organization trusts you, they believe in you and most importantly they’re holding you responsible and accountable for being the guy who they believe can take them to where they want to go. … Once I signed that deal I promised myself to strengthen my work ethic.”

So you’re determined to justify that contract?:

“Absolutely. Just because I want to be the best. The money means nothing. I could be making $400,000 this year and still go out and give it 110 percent. I think the football field is a sanctuary for me whether I’m in practice or on the field.”

You appear to be extremely content with your life right now:

“I do feel [like I’m in a different place] because I’ve been through a lot. I’ve been through situations that I felt like I should have never been in. Unfortunately it happened and I had to handle it. And it’s taught me a lot of responsibility, accountability and direction. … So many things have slowed down for me and I realize what’s most important and that’s taking care of myself and my family and concentrating on football, which is the sport that I love. I’m thankful for the people that’s around me. I’m thankful for the city that I’m in, the organization that I play for, the teammates that I have and the friends that I have around me now.”

How are you looking at your return to Atlanta?: