With one simple word in one quick tweet on Monday night, USC quarterback Matt Barkley seemed to sum up the first half of the BCS national championship game in the same way that everyone else that was watching it. Barkley very simply tweeted the word, “Bored.” You couldn’t help but wonder if he was thinking about turning in a more productive and highlight-reel performance playing in the title game a year from now as he’s decided to return to USC for his senior season. The Trojans will almost certainly be a contender next year as they come back from two years of probation and not being able to play in the postseason. Matt Barkley joined XX Sports Radio in San Diego with Darren Smith to discuss his decision to return to USC for his senior season, living with no regrets about his decision, tweeting about being bored during the title game on Monday night, his definition of a fun game to watch, if USC’s offense would have scored on the Alabama defense, being the Heisman favorite heading into next season, playing through two years of probation and  his thoughts on Tim Tebow and the stir he’s created this season quarterbacking the Broncos. 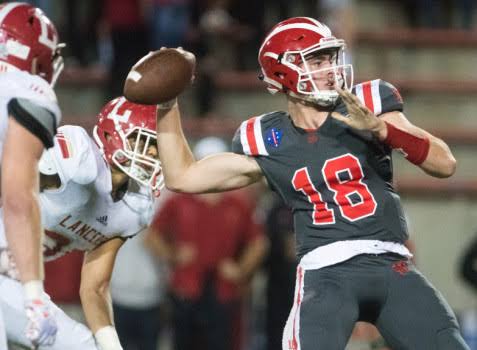 How tough was the decision to return?:

“It was very lengthy, very time-consuming. A lot went into that decision, trying to figure out both sides of the coin in this whole thing and weighing the pros and cons and talking to a lot of people. … A lot went into it, but at one point we’d pretty much gathered all the information we had and ultimately just had to come to a decision and it seemed to me that USC is where I needed to be.”

Before you make a decision like that do you have to convince yourself that you can’t have any regrets?:

“Correct. I think that’s something you have to establish. At the same time, we do have very high expectations for myself and this team. … We have lofty goals and things you want to achieve, but I think it’s going to be important for us to keep the same mentality that we had this last season. We couldn’t play in a bowl game so it was kind of us against the world at times of trying to make a statement and trying to prove a point. I feel like we have to do the same thing this year even though we’re going to be highly ranked entering the season.”

On tweeting that he was bored during Monday night’s national championship game:

“I actually got excited toward the end with Trent Richardson. For a second there, I thought the kicker was going to get MVP of the game. … I just think it was something that people weren’t used to. … You could definitely tell Bama had more juice from start to finish and earned that championship.”

What’s your definition of an exciting game to watch?:

“I think just great, quality football, great matchups of player personnel to where you can see certain matchups where it’s a receiver and a cornerback or a quarterback and his receiver or a running back and a certain linebacker. I think things like that can make a game exciting.”

Did you watch that game as a fan of college football or with the mindset that you could be playing one of those teams next year?:

“A little bit of both. I think every USC fan thought that at one point during the game that that could be us next year. And we can say that all we want, but it doesn’t mean anything right now. … We’re not really going to say much about where we think we should be or where we should end up.”

Would your offense have scored against Alabama last night?:

“We haven’t played in over four weeks so, at this point, due to the fact that we weren’t practicing, no. But I think the way we finished the season as a team with that win up at Oregon and rolling over UCLA was a great way to finish and our team was really clicking. We were starting to get that rhythm back … and I don’t think we could’ve been stopped.”

How do you feel about being the Heisman Trophy favorite heading into next year?:

“It’s just something that is a statement. That’s all it is right now. There’s no validity behind actually winning anything right now. It’s an honor to have my name in the talk, but to me I’m approaching the season like I’m not considered for anything.”

How tough was it to go through those two years of probation?:

“It was rough; it was brutal. I like being a positive guy and always keeping a great attitude and looking at life that way, but the last couple years, they were tough. We had to find ways to challenge each other. … We definitely found ways to do that, especially the last half of this season, of blocking all those negative things out.”

What do you think when you’re watching Tim Tebow play in the NFL?:

“When I heard what happened, I was both shocked and in awe that he’s been able to do this. I’m proud of the guy. He’s a winner; he’s a gamer. And he can certainly capture a team, just a passionate player who stands up for what he believes in. I love that about him. … When he needs to make plays, he makes plays.”