Kyrie Irving Injury Could Be Season-Ending, But Coach K and the Duke Blue Devils Still Have Sights Set On Defending Title

The Duke Blue Devils have suffered their first setback of the college basketball season. No, the Dukies didn’t lose a game that you missed. They’re still a perfect 10-0 and ranked No. 1. Duke did however lose star guard Kyrie Irving to a significant toe injury that may threaten to end his season. For the time being, Irving is listed as ‘out indefinitely’.  The 6-2 freshman out of New Jersey was the team’s leading scorer at just over 17 points per game, so needless to say, the loss hurts. But when you’re Duke, your season doesn’t sink or swim with just one player, not even the best freshman in America.  Yes, Duke’s title repeat will be more challenging if Irving doesn’t return, but there’s still enough talent on the squad to make some noise in conference play and come tournament time.Krzyzewski joined WFNZ in Charlotte to talk about the injury to star guard Kyrie Irving, how Irving may unfortunately be out for the year, how Irving is seeing a team of specialists as part of the process of evaluating his injury situation, how the injury doesn’t at all effect the team’s goals moving forward, and how he’s honored but not overly fixated on the career milestones that rest on the horizon, namely passing good friends and mentors, Dean Smith and Bob Knight, in the career wins list sometime in the near future. 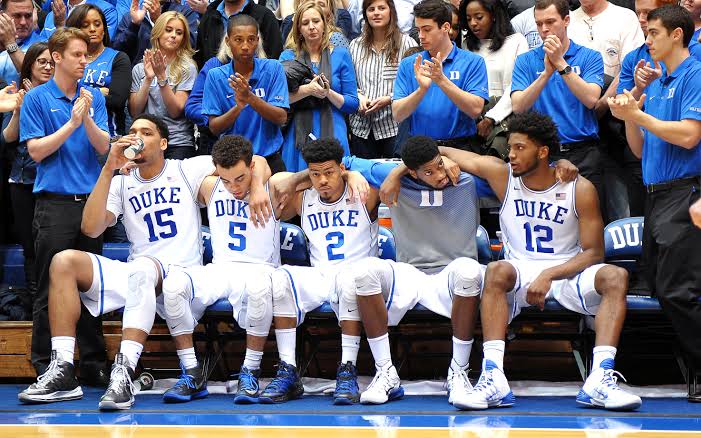 On the latest in the Kyrie Irving injury situation:

“The latest is the same and it’s he’s going to be out an extended period of time. We’re having him see a couple of the best people in the country. We have one of the best people in the country right here at Duke in Jim Nunnely, and he’ll see a couple other people over the course of the next several weeks. We have a course of action in seeing people and while he’s seeing those people, he’s in a position where recovery is taking place. However, it’s a very sensitive injury and there’s a few different methods you would go about in treating it, and we want to make sure that the method we’re using ensures his career. I’m not going to go into details about the injury, but it’s a serious injury. He’s going to be out indefinitely, and it will still be that way as we go forward.”

On if there’s in fact a chance he might not return this season:

“There’s a chance, yeah, that we could be without him all year.”

On his ability to adjust mid-season with personnel and strategy, and on what he’ll change with this team moving forward:

“Well I think the job of any leader, whether it’s in business or a coach, is to try to create a system that gives your team the best chance to win, and not just have a system that you use year after year and hope that the people you have will adjust to it. So that’s what I’ve enjoyed about coaching is doing that. And you would hope that you would do that each year and not within a season, so when that happens, you still have to do the same thing and take a look at your assets and what you don’t have. And we still have a good team, and the basic difference on defense is that we have lost a guy that can really pressure the ball along with Nolan. So we always had an outstanding player at the point of attack on defense on the other team to pressure that guy.

That’s changed. And offensively, we had a system in place where people reacted to what the ball was doing. In other words, we gave him a little bit more space in freedom to make plays, and then you reacted to the ball. Right now we’ll still do a little bit of that, but we’ll have to have it where people are reacting to what the ball is doing. In other words, you’re setting more screens, running more continuity, and the ball reacts to people movement instead of people reacting to ball movement. I’m not trying to make this rocket science, but it’s fundamentally 180 degrees different. That doesn’t mean it’s impossible to do or a daunting task, but it is different than what we have been doing, and we have to adjust accordingly. And it will bring out good qualities in some of the guys that we have. In some respects, it could make a few of our guys better. But would we rather have Kyrie? We’d rather have Kyrie, because we thought he was the best point guard in the country.”

On if he thinks this Duke team can win it all without Irving:

“Oh yeah, we can. That doesn’t mean we will. but if I went into the locker room and said okay fellas, now you can’t win, I mean, okay then we wouldn’t. And so, you have to stay positive. I told our team, nobody will feel sorry for us, including us, and especially us. So when these things happen, any team that’s won, nobody is going to feel sorry for them. They might feel sorry for Kyrie because he’s an outstanding player, but they’re not going to feel sorry for Duke. But we don’t expect them to, and we’re not going to feel sorry either, so we have to find a way to be the best team that we can be with the guys that we have. And we still have really good guys, and if we put them in the proper positions, and they get habitual in what they do, instinctive, then we’ll have a chance. We’ll have a chance. We’ll have a better chance if Kyrie is at the point because, look, you can do a whole bunch of plays and that, but if you have talent and you’re together and you run the right stuff, you have a better chance to win. I mean, talent’s a good thing to have, and we’ve had it over the years, and we still have it. But Kyrie is exceptional, and you don’t just lose a guy like that and it not have an impact. It does.”

On what it means to him being on the brink of surpassing Dean Smith for wins:

“First of all, Dean and I are really good friends, and I have the utmost respect for him. He built something at North Carolina that will last forever. There’s hardly anybody who’s done that in any sport. He stepped down, but he could have won a lot more games. But for whatever reasons, he decided it was his time to stop. So the number of games in the big picture are not really as relevant as the quality of the performance that you have and the number of championships. For me, I can’t really look at any of these things as goals because they don’t really win anything unless one of them wins a championship. But in this area, to have two coaches at two programs that have produced close to 1,800 wins I think says a lot for this area. And there’s no question that we became better along the years because we had the honor and opportunity to coach against Dean, and he’s as good as there’s ever been. You learn from playing against the best and coaching against the best. So nobody respects him more than me outside of obviously his family of North Carolina players and staff, and his immediate family. He’s one of a kind, and again, I really think a lot of him.”

On if he talks to his former coach and good friend, Bob Knight, about steadily approaching his career win total:

“He and I are really good friends, and we talk once a week, once every two weeks. And we never talk about number of wins, because look, if Coach Knight would have never left Indiana, he would have like 1,100 wins and probably a couple more national championships. So that’s where the win totals you’ve got to be lucky – are you healthy, did you get along with all the people, did you have to support, when did you decide to leave the profession, and all those types of things. So it does mean something, but it doesn’t mean as much as championships and those types of things. So Coach and I never talk about it. He’s won over 900 games. For him, I hope he feels proud of the fact that he and one of his former players will have produced over 1,800 wins or something like that. That’s pretty cool. I hope the guys that I’ve had the opportunity to coach, now as head coaches would have careers – and they are having good careers – that I could look at and say I was a part of that. So that’s the way I hope Coach Knight would look at it, and I think he does.”